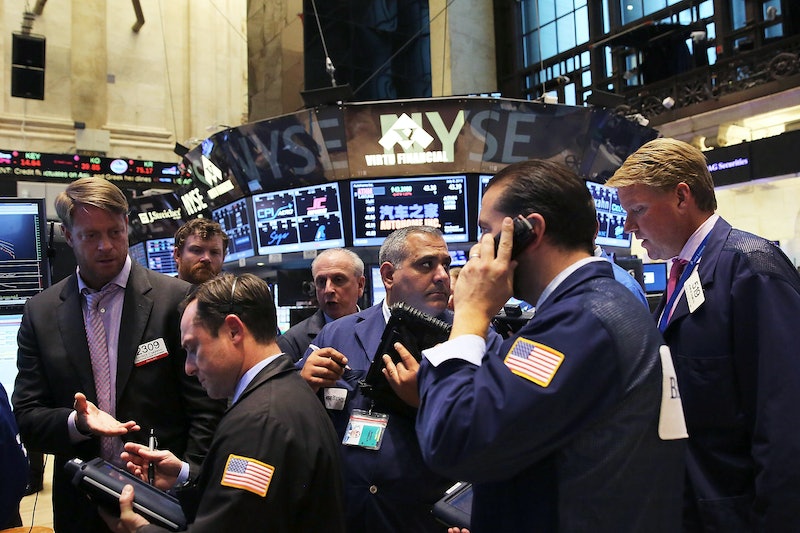 On Wednesday, technology issues caused the New York Stock Exchange (NYSE) to shut down for about four hours in the afternoon, beginning at 11:32 a.m. ET. The shutdown followed losses in U.S. stocks after the exchange struggled with the "long-term" issues of selling Chinese stocks and Greece's debt crisis, according to USA Today. The newspaper also reports that prior to the shutdown, the Dow Jones was already off by almost 200 points and ended the day down 261. Trading on the exchange continued at about 3 p.m, but even after the exchange closed one hour later, the exact cause of the shutdown remained unknown as officials attributed the glitch to internal technological issues.

"The good news is there's redundancy in the system and stocks are continuing to trade," Sal Arnuk, a trader at Themis Trading, told USA Today, in response to concerns about the perils of an electronic market. Although, surprisingly, the shutdown did not substantially affect many investors or industries, to those who were affected by the NYSE shutdown, recovering from losses — or analyzing surprising gains — is currently a greater concern than the cause of the technology issues. The NYSE shutdown had particularly adverse effects on the already declining iron ore industry and foreign investors and unsurprisingly positive effects on cybersecurity stocks.

By the end of Wednesday, following the NYSE's shutdown, the iron ore industry's spot price for 62 percent fines fell "more than 10 percent on concerns of oversupply," its most substantial daily fall ever, Business Insider reports. According to Foreign Policy, the Chinese economy has been struggling with "citizens borrowing money to buy stocks they couldn't afford." Chinese stocks were already declining prior to the NYSE closing at 4 p.m., when the Shanghai Composite Index ended down 5.9 percent. A previous sell-off of Chinese stocks erased more than 32 percent from Shanghai stocks, CNBC reports, and foreign investors have been withdrawing from the market in large numbers.

Foreign investors attempting to sell stocks at the time of the shutdown were hurt by the exchange's manual cancellation of all open orders to reopen. Fear surrounding Greece's economic crisis and its adverse effects on the American economy have also triggered foreign investors to pull out of American stock markets, Foreign Policy reported. "Given the global paradigm of what's going on in the EU, Greece, China, this is the last thing that the U.S. equity markets need," Peter Kenny, chief market strategist at the Clear Pool Group technological financial firm, told CNN.

The shutdown ultimately affected any investors who had orders that were being processed while the shutdown was taking place, The Wall Street Journal reported. The newspaper went on to explain:

The institution might not be able to find out whether its order traded, and it could have trouble canceling the order. The NYSE said in a note to traders that all open orders had been canceled except the long-term requests to buy or sell put in by institutions that are known as "good-till-cancel" orders.

Meanwhile, the shutdown had positive effects on cybersecurity stocks, with many attributing the shutdown to cyber-hackers despite fervent denial by the NYSE, which blames the shutdown solely on technological issues. Hacking episodes, or, in this case, pervasive hacking conspiracy theories, certainly benefit cybersecurity companies. CyberArk Software, Imperva, AVG Technologies, Palo Alto Networks, and the ISE Cyber Security index all made significant gains on the stock market following the NYSE shutdown.

Surprisingly enough, the NYSE shutdown had minimal effects on the average American investor, and, according to USA Today, it really didn't affect the NASDAQ at all. Those who were hurt by the NYSE shutdown were, for the most part, not in great shape prior to the shutdown. As for the rising prospects of cybersecurity companies, the trend is likely to continue for as long as wild tales of a mysterious hacker continue to circulate on social media.