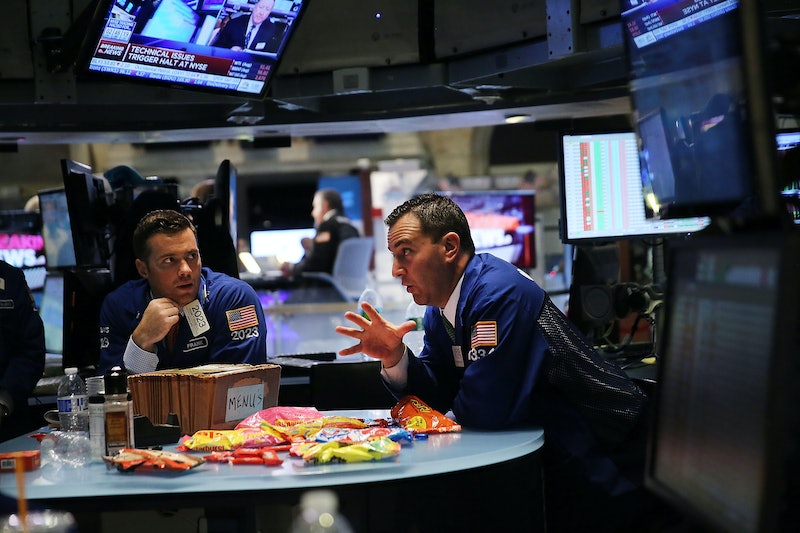 Grab your tinfoil hats and hold onto your butts everyone, because the Internet is swirling with conspiracy theories about who's to blame for the New York Stock Exchange, The Wall Street Journal, and United Airlines glitches Wednesday. And some of these theories are pretty convincing. Though officials said all of today's issues — which resulted in all three being brought down before noon due to computer difficulties — were just a coincidence, it's hard to fathom.

United Airlines had to ground planes and halt traffic for several hours because of a faulty router, NYSE stopped trading for three hours due to some form of computer glitch, and The Wall Street Journal also featured error messages. The situation caused widespread panic (at least on the internet) and President Obama was notified of the events. But everything was back up and working within a few hours, and the "all clear" was issued. Despite repeated statements that indicated there was no evidence of malicious intent or cyber-hacking, today's glitches seem like too big of a coincidence to be swept under the rug.

Twitter, as always, agrees. There's nothing the Internet loves more than a chance to make fun of bankers and join in widespread theories that, in fact, have no basis, which is exactly what happened today. The conspiracies got bigger and better as the day went on, and I've got to admit that Twitter might be onto something. So who could be responsible for the technological difficulties? Oh you know, the usual suspects.

China's economy is in free fall right now, and it's possible that the glitch was a dry run for something even worse that's about to come. And after all, it would be so like China to do something petty like crashing our economic infrastructure.

Internet hacktivist group Anonymous tweeted a cryptic warning just hours before the crash, which had a lot of people spinning. Likely it was a fortuitous reference to China and Greece's own economic collapses, but they seem to be having a lot of fun with the lucky coincidence.

Bane From The Dark Knight

By far the most credible theory floating out there is that Bane, the antagonist from The Dark Knight Batman franchise is responsible for the glitch. After all, he did crash the stock exchange once before in his attempt to take over Gotham.

Trump has been extremely vocal about how knowledgeable he is when it comes to economics. I bet he knows his way around NYSE pretty well. Did anyone check to see if the computer "accidentally" got unplugged?

The new Terminator movie was released at the beginning of the month to less than stellar box office numbers. Maybe it was a last ditch, really dangerous marketing ploy?

Is it possible to have an American conspiracy theory without the Illuminati?

The thought of Joe Biden accidentally pressing the wrong button is a lot more comforting than the idea of an impending Chinese attack, so I'm in favor of the Biden theory.

Honestly, the fact that #ThanksObama wasn't trending is a giant step forward for this country.