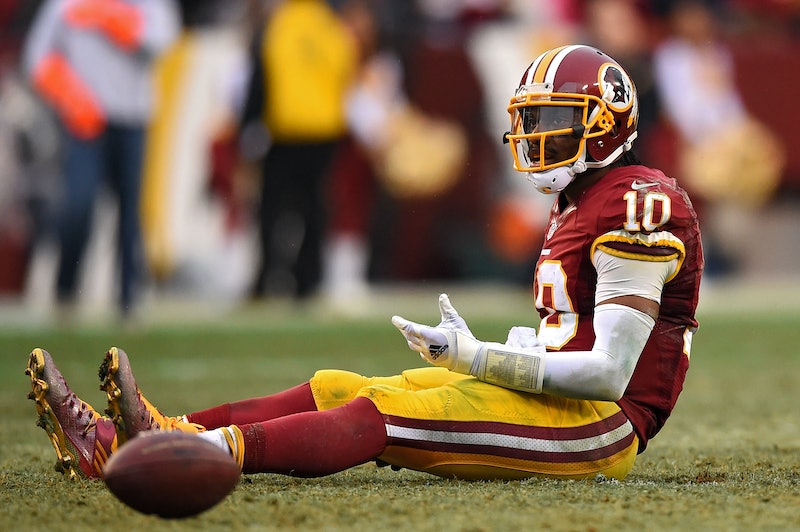 Sorry, RG3 fans. On Wednesday, a federal judge upheld an earlier ruling and ordered the cancellation of the Washington Redskins trademark on the grounds the name may be disparaging to Native Americans. But to that, the Redskins are waving their collective index finger and saying, "Not so fast." Don't necessarily expect to see a name change any time soon, although the move could put other teams on heightened alert.

Wednesday's ruling came from U.S. District Judge Gerald Bruce Lee, who handed down a lengthy 70-page decision. The case before Lee focused on Section 2 of the Lanham Act, which outlines the federal trademark registration process. Section 2, specifically, prohibits registration of a mark "which may disparage." The case arose back in 2006 when a group of Native Americans filed a petition with the federal Trademark Trial and Appeal Board to challenge the Redskins' trademark. Ultimately, the appeal board agreed with the Native Americans and declared that the name is offensive, meaning that it would not qualify for federal trademark protection. The Redskins appealed, sending the case to federal district court. The team argued that the trademark should be protected by the First Amendment.

This time around, the judge again sided with the group of Native Americans, writing that "the Redskins Marks consisted of matter that 'may disparage' a substantial composite of Native Americans." The Redskins' First Amendment argument doesn't hold, the judge asserted, in part because the loss of federal trademark registration does not require the team to stop using the name altogether.

Yes, you read that right. Technically, the team can continue to use the name even though the federal government finds it offensive. Here's why: First and foremost, the trademark cancellation cannot go into effect until the Redskins have used or waived their right to an appeals process. Redskins President Bruce Allen has already said that the team will appeal. Hypothetically, the case could go all the way to the Supreme Court before the team actually loses its trademark registration.

Second, even if the team actually does lose its trademark registration, it will still be allowed to use the name — it just won't have any federal protection to do so. Trademark registration gives an organization certain benefits. According to Lee's decision, these benefits include the right to ask customs officials to seize imported goods with infringing trademarks and the right to certain damages for trademark infringement. (In other words, if the Redskins do lose their trademark registration for good, you'll probably be able to get a team jersey off the black market for a lot less than Nike's $59.99 price.)

Without federal protection, it would be harder for the Redskins to continue using the name, however it wouldn't be impossible, especially considering the vast name recognition it already has. To continue using the name would be a huge slap in the face to not only the Native American populations who oppose it, but also to the federal courts that have ruled against it. Even still, the Redskins could very well consider keeping their moniker, especially considering that as recently as 2014, only 14 percent of people thought the team should change the name, according to an Associated Press/GfK poll.

As the case moves to a higher court, other professional teams with potentially controversial names will probably have to pay attention. They've escaped the spotlight for now, but the Atlanta Braves, the Chicago Blackhawks, and the Cleveland Indians could face criticism down the road. In some of these cases, it could be less about the name and more about the logo that depicts a cartoonish or savage-looking Native American.

Despite Wednesday's ruling, #HTTR appears to be safe for another season. Even still, the ruling is a win for sparking more public debate and putting the pressure back on the team.