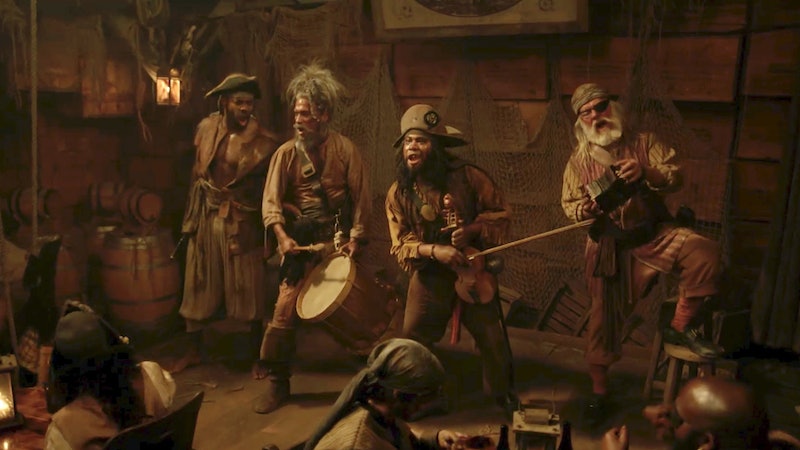 There's a reason the incredible Comedy Central series Key & Peele has been one of the funniest shows on television for four seasons now. Keegan Michael Key and Jordan Peele consistently create hilarious sketches that provide amazing laughs and commentary on real issues plaguing and consuming the country today. In the Key & Peele Season 5 premiere, the comedians did it once again by doing two perfect sketches. One sharply parodied the recent police brutality caused by racial unrest and the second took a pirate's song and used its traditionally masculine lyrics to promote gender equality and feminism. I know, sounds totally weird right? But it worked so insanely well, and it proved that Key and Peele are insanely intelligent feminists. And that's the dream combination for comedians.

The sketch was preceded, as per usual, by a little conversation between the guys on a road trip. Peele began the line of questioning by explaining that he believed himself to be a feminist. However, he asked, what if a woman walks in with a pair of "aardvarks"? Key was taken aback for a second and replied with another question "Aardvarks?" Apparently Peele believed that aardvarks were a "sexy" enough animal to describe the female anatomy, and when he asked Key what animal he would use, Key had an incredible response "I would just use a completely different object in the world." Then the sketch began on that completely confusion, hilarious note.

The sketch found Key and Peele singing an old pirate's song whose lyrics began as a normal song of this style might, with stories about women they had met that seemed to have... ahem... loose fibers. But of course, there was a twist. For example, Key's lyrics began with him singing about a woman he knew that was "good on her knees." Yeah, not a strong start. But that verse ended with the whole bar singing along with lyrics about putting your women's needs before your own. The chorus of the song included the lines "We don't use the word ho, because that's disrespectful, yo."

Later the song and sketch finished with more lyrics about how women are strong, smart, and equal to men ("Women are doctors, too!"), but when one man starts to use words the rest of the group disapproved of, he was shot down by a pirate woman who silenced the room and then finished the song with the crowd. It was perfect. It was epic. It was classic Key & Peele.

More like this
Spice Girls’ Net Worth: The Richest Member Is Wealthier Than The Rest Combined
By Hugh McIntyre
Selena Gomez Joked About Her Relationship Status In Her ‘SNL’ Monologue
By Grace Wehniainen
After 'Heartstopper' Used This Indie Artist’s Song, Streams For It Soared 8,000%
By Alyssa Lapid
Danny Boyle's 'Pistol' Explores The Extreme Highs & Low Of An Iconic '70s Band
By Rachel Mantock
Get Even More From Bustle — Sign Up For The Newsletter