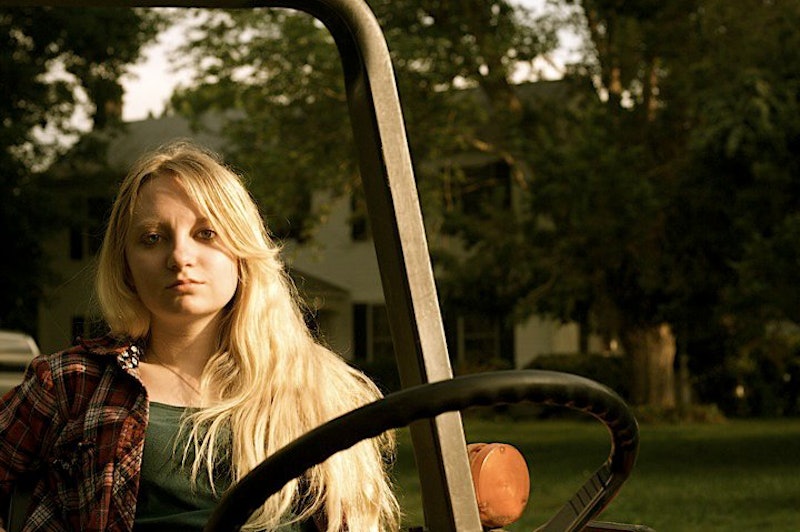 Even before 9/11, I considered myself a patriotic conservative. My family were staunch supporters of George W. Bush, and at 8 years old, I followed Bush's presidency with a fervor along with my mother. I can vividly recall Bush's impassioned speech as he stood at Ground Zero following the attacks. I believed in him and his administration 100 percent. So as I watched TV and touted the Dubya as my hero, I never imagined I would one day consider myself a feminist liberal. No one in my family, least of all me, could have seen it coming. And the irony of it all is that the first inklings of my liberal leanings were brought out by none other than his second-in-command Vice President Dick Cheney.

I come from a deeply conservative Southern family, where love of God and country runs strong and Bush was king. My mother was born and raised in the Bible Belt of America and told me beautiful stories about races to the moon and patriotic duty. And through his lifelong travels, my father saw more of the country than I could ever achieve in my wildest dreams. So when he spoke about his beliefs and "what is really happening in our nation," I believed him. My dad just knew what it was like, and he spoke with such authority there was no room for argument.

It didn't occur to me that politics could divide a family until my older sister Katie hit a rebellious phase. In between vicious arguments with my parents, she made the egregious error of threatening to vote for John Kerry in 2004, a fact that was held against her for years. Although she eventually began voting for the GOP ticket again, I knew I never wanted to fight with my parents like that. It seemed like such an unnecessary effort, and at the time, I honestly just didn't care.

When Cheney broke party lines and publicly supported his lesbian daughter Mary and marriage equality, that was a big moment for me. I was 12, and even at that age, I knew I didn't necessarily share my parents' views on same-sex marriage. It made me uneasy. Everyone I knew had very clear expectations of what was right and wrong, and at first, the fact that Cheney was willing to go against his party and president was so liberating to me.

But then it started to raise other questions. What was more important: your political party or your love of family? Cheney went against party and president and made it clear that supporting family is more important than sticking to politics — and that love of family could even maybe change those views. But what if my love for my family wasn't enough to keep me in line with family politics? Would they support me even if I deviated from their beliefs? And could I continue to stand by passively while my family expressed beliefs that had started to deeply trouble me? It was the first time it occurred to me that politics could even be an issue in family dynamics, and it was a worrying and disturbing train of thought for a 12-year-old.

I floated through high school without caring or thinking much about politics. Everyone at my Catholic high school all had the same opinions as me. So when I started my freshman year at the University of Mary Washington (a left-leaning liberal arts college in Virginia), it was a culture shock. Before college, the only liberals I regularly interacted with were my kooky pot-smoking aunt and a family friend who had a bumper sticker saying, "A village in Texas is missing their idiot." Suddenly I was in a sea of them, each ready and eager to mock my beliefs and stereotype my family.

My roommate plastered our room with Obama signs, and a girl in my English Lit class gave a presentation on the beauty of late-term abortions. An overzealous girl in the food hall called me a bigot and homophobe because I wore my Catholic high school's T-shirt. I was horrified and felt victimized for my beliefs, so instead of speaking out, I became stubbornly and aggressively conservative and isolated. I shut out arguments, barely researched my own thoughts, and avoided any political conversation. In retrospect, I was doing what a lot of my peers did. Outside in the "real world" for the first time, they defaulted to the position of their parents or their friends. But I was unhappy at my college and determined to give myself more reasons to hate it, so I wore my conservatism like a martyr badge of honor.

I don't know when I starting breaking liberal. It might have been when I first understood the benefit of affordable healthcare, or grasped the concept of welfare benefits, or learned to separate personal opinions on abortion from the larger issue of a woman's right to choose. There was no epiphany. All I know is that away from my family, I began formulating my own opinions for maybe the first time ever.

I learned quickly I wanted to hide these beliefs from my parents. Once, I came home during a break and tried to discuss the issue of capital punishment with my mother. She told me, "Oh Jesus, you went to college and came back a flaming liberal." Because of comments like that, I didn't want to let her know I might also be a feminist because it felt like a dirty word in our house. I felt ashamed and embarrassed, like I had fed into "peer pressure" and the popular opinion of the people surrounding me.

I finally "came out" as liberal to my mother this summer after I graduated college and moved back to the family home. "Mom, I need you to know that I'll probably be voting for Hillary Clinton in the upcoming election," I told her as we sat out on our porch. "I want you to be prepared, and I really want this to not be an issue in our family."

My mother nodded at me and didn't miss a beat before responding, "It won't be. I love you, and I'll always love you," she said. "I just think you're stupid." In her own way, this was an incredible statement of support, even with the affectionate jab.

I know without a doubt that my mother will hate Obama until the day she dies, and nothing in this world will convince her otherwise. But I also feel for her. She has such strong beliefs and convictions but wound up with two daughters who will never share her views and ideals. My older sister, though far more liberal than my parents, is torn between her conservative beliefs and frustration with the GOP. And in my parents' mind, I've tattooed "DEMOCRAT" across my forehead. I think of how eager I am to please them and keep the peace and realize they must be disappointed, at least in some way, with how things turned out.

I also think a lot about Cheney, a man who I actually can't stand, but begrudgingly admire a bit. He understood that loving and supporting your family is what is most important, regardless of party affiliation or political views. He was upfront and brave in putting his party, politics, and religion aside in order to fight for his daughter. So if Cheney can piss off the entire GOP and scandalize a country, I think I can manage to quietly listen to my grandma talk about her love of Ronald Reagan.

More like this
Michigan’s Governor Is “Going To Fight Like Hell” To Protect Abortion Access
By Andrea Zelinski
How To Fight For Reproductive Rights, Based On How Much Time You Have
By Courtney Young
Here's How To Practice Self-Love In Small Ways Every Day
By Mackenzie Sylvester
How Sunnies Face Is Championing Filipino Beauty
By Kristin Corpuz
Get Even More From Bustle — Sign Up For The Newsletter