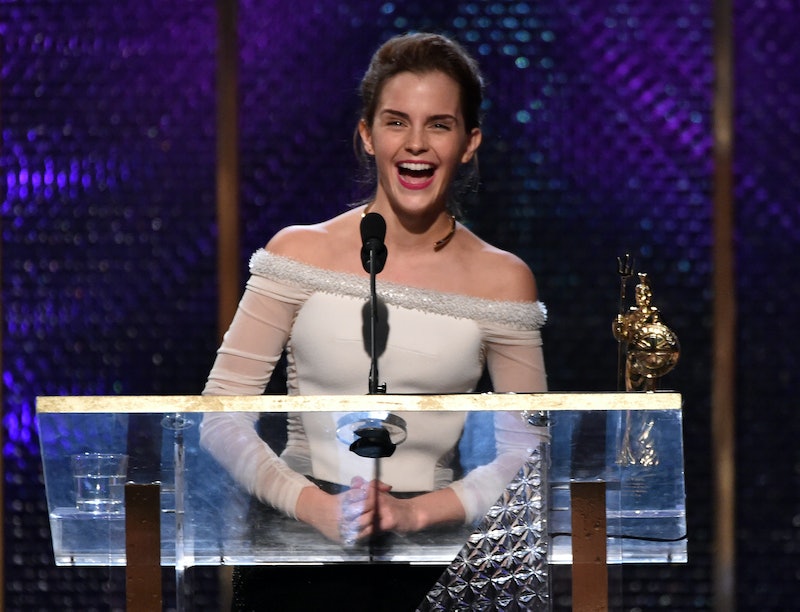 The feminist movement once again attracted widespread attention when, in September 2014, Emma Watson launched her #HeForShe campaign, which convinced many notable male stars to come out as feminists and encouraged other men to do same. It also clarified for many what feminism really is. Last week, Watson was recognized as Campaigner of the Year at the Observer 2015 Ethical Awards, proving her campaign has yet to lose its momentum. Since then, society has gotten better at recognizing what feminism is: a movement that supports the rights of people of all races, classes, religions, sexual orientations, and gender identities. However, society still struggles to identify what feminism is not, because yes, there are things feminists say, and there are things no feminist would say ever.

True, we like to keep our minds open, and that's exactly why we're against saying close-minded things. Good-natured comments about gender equality can't be considered feminist if they include racist or homophobic messages, because feminism concerns more than gender equality. In some ways, feminism is simple, and in other ways, not so much, as it calls society out on complex issues that reach beyond the equality of the sexes. If you feel like you understand what feminism is, but aren't so sure about what it's not, here are 14 quick things feminists would never say, to help you out:

Look, feminists don't hate men as individuals: We hate the values and attitudes our patriarchal society has instilled in them. And yet when men or anyone for that matter dismiss a feminist's arguments by saying "not all men," what they don't realize is that, sure, not all men are misogynists, but all women have been adversely affected by the misogynistic behaviors of men and the widespread misogynistic attitudes of our culture.

Feminists recognize that a woman's state of dress is not an invitation, and that rapists rape human beings, not clothes. No matter how provocatively a victim of rape was dressed or how s/he was behaving prior to being raped, feminists recognize that if consent was not given, rapists have no excuse whatsoever. Instead of blaming victims, feminists want rapists to be held responsible for their decisions and inability to "control themselves." And another thing: Feminists take male rape victims equally seriously.

Sure, I doubt any woman in such a difficult situation is really thinking rationally, but a feminist would know that her partner is responsible for his own actions and while "the other woman" shares some blame, she didn't force him to do anything. And no, feminists never, ever, use the word "slut," but I'll expand on that later.

Feminists do not give a single sh*t about the private lives of their fellow woman. When it comes to female sexuality, we really only have four words to say: "You do you, girl."

I hope I don't totally shake up your world with what I'm about to tell you, but a lot of your favorite suffragettes probably weren't quite the feminist heroes you take them for. Plenty of suffragettes were passionate about women's rights, but were also pretty adamant white supremacists, sometimes enforcing racial segregation in their protests by keeping black women in the back. Today, feminists prioritize racial equality just as much as gender equality, and so you'd hardly find one with complete admiration for a white supremacist, no matter how hard she fought for voting rights for women.

Here's what feminists care about: comfort and respect. Do whatever makes you feel comfortable, and we'll respect that, whether that's not wearing a bra or literally walking the streets topless. Once again, you do you girl.

7) "I Think Miley Cyrus Is Just Behaving Like This For Attention."

Once again, feminists just want people to be comfortable, and respect anyone's peaceful lifestyle decisions. And so what if it is for attention? Wow, a woman wanting people to pay attention to her — call the police!

8) "That's Too Much Makeup. You Should Be Comfortable With What You Really Look Like."

Feminists believe women should be able to present themselves however they want, and if that's with a crap load of makeup, then great. As women, we don't live, breathe, and dress solely to please men, and we're not deceiving men by wearing red lipstick. It's time for men to stop portraying themselves as victims, as if women are being dishonest and hiding their true appearances by wearing makeup. Frankly, if you're stupid enough to believe anyone naturally has bright red lips, that's more your problem than ours.

9) "I Think Kim Kardashian Should Stop With All The Plastic Surgery."

What an actual feminist would say: I think Kim Kardashian should continue being her wonderful, inspirational self.

10) "I'm Not Voting For Hillary Clinton Because She's A Woman."

I think this one's pretty self-explanatory. I'm sure some people have their own legitimate reasons for choosing not to support Clinton, but her gender certainly shouldn't be one of those.

For one thing, feminists don't think the vagina reflects weakness or cowardice at all — I mean, women literally push babies out of their genitals, while a solid kick to the groin could permanently end a man's reproductive prospects. So, no, feminists will never agree with the traditional, misogynistic, and inaccurate connotations of the term "p*ssy." And male feminists would respect what their partners are or aren't comfortable doing.

Never forget that feminists support equality for all; this means we loathe the term "slut" as much as we do the term "fag." We hate the word "retard," we hate anything that labels Muslims as "terrorists," and we hate disrespectful slurs in general, whether they're about women, African Americans, the mentally challenged, or the LGBT community.

14) "You Should Support Feminism Because It Benefits Men, Too!"

More like this
How The City Healed Five Years On From The Manchester Arena Attack
By Ella Glover
Starbucks' Summer Menu Includes A New Chocolate Cream Cold Brew
By Emma Garza
Plan C Vs. Plan B: What's The Difference?
By Lexi Inks
The 'It's A Sin' Creator Revealed A Massive Detail That Didn't Make The Final Cut
By El Hunt
Get Even More From Bustle — Sign Up For The Newsletter