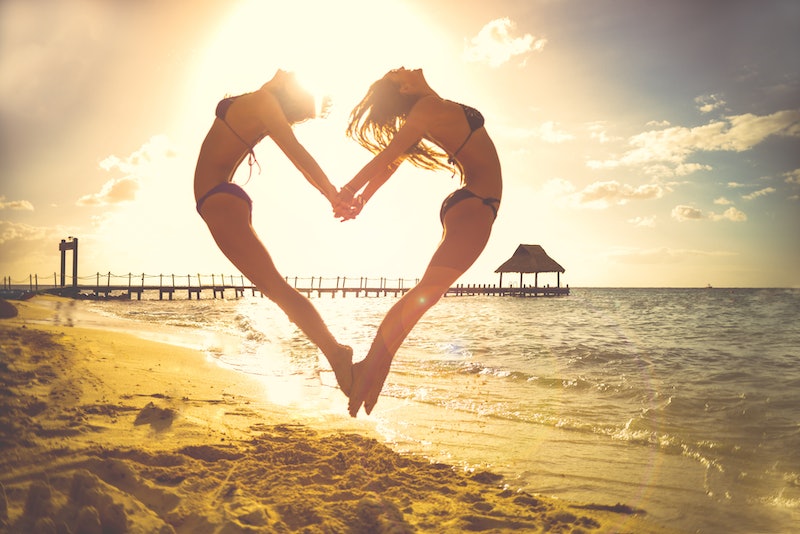 According to a new study from Sweden reported in Time, gay men and lesbian women have very different reasons for getting married. Sweden has allowed same-sex couples to register their partnerships since 1995, seven years before you could jointly adopt in these partnerships, starting in 2002. The study looked at nearly 1400 couples— 672 lesbian and 709 gay couples — who were between the ages of 20 and 64 and entering into their first partnerships. The researchers compared the couples to data from over 260,000 heterosexual couples in areas like overall earnings, difference between earnings, and number of children. The research found that gay couples tended to marry to pool resources, while lesbian couples got married as a foundational step toward starting a family. The authors note "the main function of registered partnership for gays is resource pooling... For lesbians, on the other hand, the right to joint or step-parent adoption allowed in 2002 raised fertility and possibly entry into partnership.”

Time points out that Sweden is an especially good example for this complicated area of study, where there are lots of different factors at play, such as legality and prohibitive costs: "For same-sex couples, adoption laws often lag behind marriage recognition laws—as they do in many states in the United States and did in Sweden. Having kids is especially expensive for gay mean, who need to find an egg and a gestational carrier—a problem lesbian couples don’t have."

I would add that every couple is different, obviously, and also, while the research is undoubtedly useful, not all of the reasons for getting married are as sterile and joyless as some studies can make them sound. Even though I'm not big on marriage or the most romantic girl in the world... don't people like, love each other and stuff? I took to the internet to find out, and here are some reasons to get married, according to stats and science:

1. Some people just think it's important

So this is kind of a basic reason— people get married because they think the institution of marriage is important. But here's the interesting thing: it's changing, fast. A Gallup poll found that the number of people who think marriage is important if they want to spend the rest of their lives together or if they have children together has dropped from 76/73 percent, respectively to 64 percent for each. But that 10 percent drop has happened just between 2006 and 2013, so it's interesting to think what will happen going forward.

OK, I know it's not what you might expect, because we always think of the sex life dying out in marriage. Turns out, not the case. A study of nearly 6,000 participants by Center for Sexual Health Promotion at Indiana University found that 25 percent of married people were having sex 2-3 times per week, while that was only true for less than five percent of singles. I'm starting to be won over tot his whole marriage idea...

So tradition isn't dead. A survey conducted by Relationships Australia found that 91 percent of respondents pointed to love as a reason for wanting to be married and 88 percent responded to companionship. In a similar vein, 82 percent said a "life-long commitment" and this idea of commitment and loyalty is a recurring theme. I've never understood why marriage was necessary to show something is for life (surely it's for life if you do it for life? And you can still get married and then ending up getting divorced, so... not for life?) but if it makes you feel more secure or is important to you, why not?

There are lots of health benefits to long-term relationships, including the recent revelation that it relationships can play a large role in cancer survival. But it looks like some of the marriage health benefits are disproportionately manifested in men, so ladies we may not get all the bonuses.

So this is a tricky one. There are certainly things like tax breaks and multiple incomes that make marriage seem like a step towards financial security, which we saw in the gay couples from the Swedish study. But it doesn't always work out the way. With student loan (and other) debts ever increasing, there's a greater chance your partner is bringing debt into a marriage as well as income, and it's a debt you could end up shouldering some of the responsibility for. In fact, financial instability is one of the top factors putting millenials off marriage, according to Time.