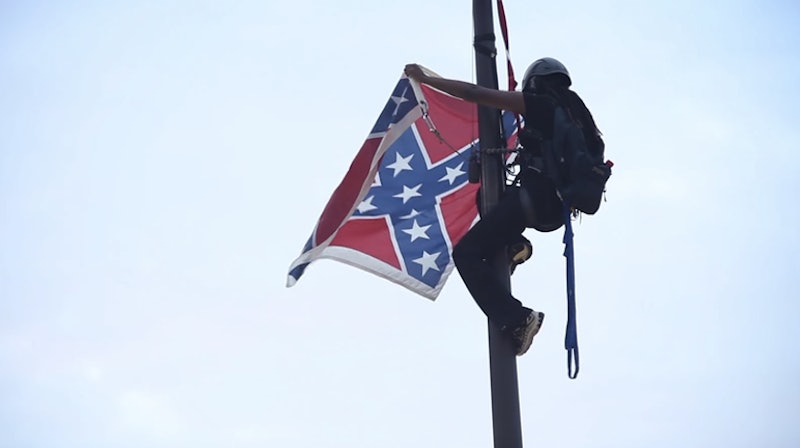 Early Thursday morning, the South Carolina House voted to remove the Confederate flag from state capitol grounds in the wake of the mass shooting at the AME Presbyterian Church in late June. Having previously called for the flag's removal, South Carolina's governor Nikki Haley is expected to sign the bill into law on Thursday afternoon. Additional attention was drawn to the cause of removing the flag when activist Bree Newsome climbed the flag pole at the state capitol and removed it herself. Newsome was arrested for this act. Because her efforts were met with a now-defunct law meant to protect a symbol that represents hate to so many, I feel that Bree Newsome should now be appointed to remove the Confederate flag once and for all.

In a very powerful show of civil disobedience, Newsome literally took the Confederate flag issue into her own hands on June 27, when she scaled the flag pole and removed the flag, despite calls from below her from law enforcement asking her to stop. Upon being arrested, the flag was taken from Newsom and placed back on the flagpole, in what I think can only be described as a robbery of power. The Confederate flag should have been removed many decades before now, and Newsome was taking the necessary action that legislators in her state failed to do until Thursday morning.

Newsome has been very vocal about the need to remove the flag since she took it down in June, and as such has become a hero to many. Her action was brave, bold, and ultimately demonstrated how people were no longer willing to tolerate the flag. For so long, the law protecting the flag was given priority over the needs of the communities who wanted to see it removed once and for all. Now that the newly-passed bill is as good as law, it's only right that the person who decided to act where the state had failed should be the one to take down the flag, knowing that this time, it will stay down.

I believe that Governor Haley should appoint Newsome to remove the flag in a manner of the activist's choosing. That she had to resort to donning a harness and climbing a 30-foot flagpole to get rid of the flag, albeit very temporarily, called attention to just how absurd it was that it was still there to begin with. If your constituents are risking life and limb to do away with a piece of painful history, it means it's really time for it to go. Being brave enough to take on this task herself, Newsome deserves the chance to remove the flag while not being harassed by law enforcement, with no fear of legal repercussions, and with the full support of her community.

Knowing that she would be arrested and the flag would be replaced after her descent, the symbolism behind Newsome's actions were the most powerful aspect of her climb. Certainly, that symbolism will not be the same now that removing the flag will be a state-sanctioned action. But while being the person who removes the flag legally and for all time (I hope) will not have the same meaning to Newsome as it did the first time she took it down, officially appointing her for the task will have new meaning of it's own. As Governor Haley tweeted on Thursday, "It is a new day in South Carolina ..." By having Newsome remove the flag, the state can prove that it really has turned the page.

I wouldn't blame Newsome if she doesn't want to climb the flagpole again, but I would blame South Carolina if they don't offer her the opportunity to celebrate a legislative win for this historic social justice battle. Regardless of whose hands ultimately end up removing the Confederate flag after the bill is signed, Newsome's bold activism should be honored and celebrated, and South Carolina's government should remember the will and power of its communities.