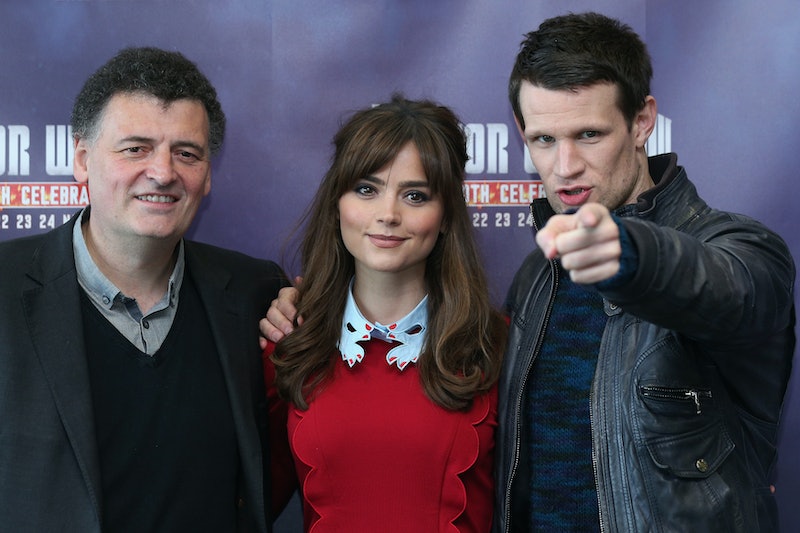 Since around the moment in Doctor Who where David Tennant's face transformed into Matt Smith's, there has been a storied and much-discussed divide between the two main New Who camps: Those who prefer the Russell T. Davies' era, and those who hopped aboard the train for Steven Moffat's flashier one. Both are valid, and there are many whose tastes overlap with both the showrunners. But this week, what with the show's 50th Anniversary Special having actually finally aired, it's a relief to know that current Doctor Who showrunner Moffat and former one Davies don't seem to have given in to the fandom fighting that has happened around their differences.

In fact, Moffat's been doing the press rounds recently in promotion of "The Day of the Doctor," and given that the show's 50th anniversary has brought up a certain remembrance of all Doctor Who history past, Davies — and Moffat's relationship to his material and to the man himself — came up. And what he said got us thinking in a couple of ways.

First, the words themselves, from Moffat's interview with BBC America.

In reference to why he didn't bring back Billie Piper in the character of Rose, as many people assumed he was going to:

“I thought the story of Rose, which was beautiful, was done,” he said. “I didn’t want to add to it, and I didn’t feel comfortable adding to it, really. That was always [former Doctor Who showrunner] Russell [T Davies]‘s story. But we did want Billie. And I liked the idea of bringing back the Bad Wolf version. The way Russell ended it in “The End of Time,” by just sort of looping it around, was perfect. I didn’t want to stick another bit of it in. That would be wrong. I just wanted to get Billie Piper, one of the absolute heroes of Doctor Who, back in the show, but without interfering with the story of Rose Tyler. I just thought I might spoil something. I might trip over my bootlaces doing that.”

A lot of people miss Rose, and so were upset that we didn't get to see her interactions with Ten again and with Eleven for the first time — but what Moffat's saying here makes sense. In fact, it actually shows a great deal of respect for what came before his time as showrunner, which is something people have accused him of.

Speaking of Mr. Davies, he and Moffat are clearly still in close contact. Moffat said Russell was the first email after watching the 50th anniversary episode. [...] When asked if he prepared Russell for the plot of “The Day of the Doctor.” “It’s difficult with Russell because he doesn’t like spoilers. When we worked together on the show, we tried not to spoil each other. I’m really serious. When I was doing ‘Silence in the Library,’ [he said], ‘I want you to have River Song pre-figure something about what’s going to happen to Donna, and I said, ‘Don’t tell me what’s going to happen to Donna!’ And I said, ‘What kind of thing is it?’ ‘It’s sad, Steven. It’s very very sad.’ I said, ‘OK OK, I’ll put something sad in.’ [Former production head] Julie Gardner was sitting there saying, ‘You’re working on the same TV show. You can’t behave like this.’

OK, say what you will about either of them, but that's just about the cutest thing I've ever heard. These two were working in the same writer's room and they still tried to avoid spoiling each other. On the show they were writing for. That's damn adorable.

What Moffat said actually has us thinking that maybe it's time we as Doctor Who fans put down our showrunner battle axes and stop projecting our own inter-show conflict onto the showrunners themselves? We don't have to agree on who did it better or on whether Doctor Who is still a show worth watching or even on if we miss when the show's effects were more kitschy — but can we agree that these two don't seem to the ones doing the warring?

But when it comes to projecting this idea that Steven Moffat is reigning over Doctor Who like some kind of evil villain who took the show in a giant coup and who has no regards for the man who set the new generation of the show up for him in the first place? Can we stop that? Because after these quotes that mainly seems like audience projection.

Now excuse me while I go find myself some Moffat/Davies BrOTP fanfic.

More like this
How Ncuti Gatwa's 'Doctor Who' Casting Impacts His 'Sex Education' Future
By Nola Ojomu
'Obi-Wan Kenobi' Takes Place After This Key Star Wars Movie
By Arya Roshanian
'Gentleman Jack’s Cast & Crew Are Keen On Season 3, Too
By Frances Stewart
The 'It's A Sin' Creator Revealed A Massive Detail That Didn't Make The Final Cut
By El Hunt
Get Even More From Bustle — Sign Up For The Newsletter