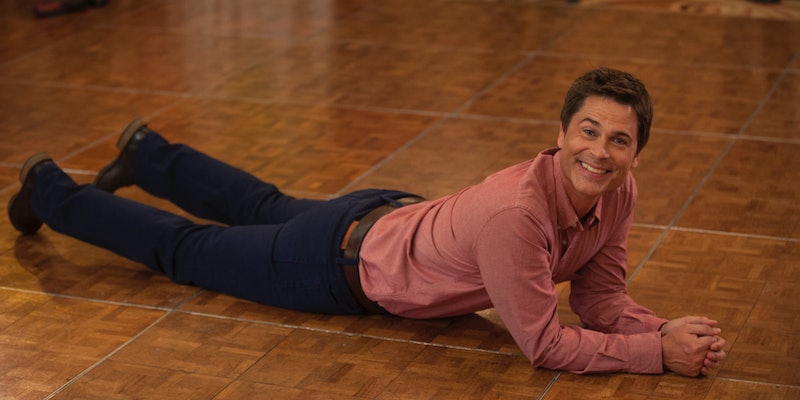 Uh oh. We just might have the next celeb Twitter feud on our hands. Ever since Ariana Grande licked those doughnuts over the Fourth of July weekend and said, "I hate Americans. I hate America," the 22-year-old has been under scrutiny. She issued an apology to BuzzFeed for her choice words about America (but not for licking the doughnuts) and expressed her stance on childhood obesity and how much junk Americans eat daily. Yep, she went off on America in a doughnut shop, where "her friend" was buying doughnuts, because she wants everyone to eat healthy. OK ... Anyway, one particular celebrity is calling her out: Rob Lowe, who said her apology was "lame" on Twitter.

On Wednesday, the Parks and Recreation actor tweeted, "As my grandpa would say: 'Yeah, sure. Pull the other leg, it plays jingle bells!' #Lame" along with a link to a story about Grande's apology. The 51-year-old then tweeted, "Cannot wait for the new Arianna Grande/Dixie Chicks jam to drop! #IActuallyLoveAmerica." For those in need of context, Lowe is referring to the time Dixie Chicks singer Natalie Maines received backlash for her "anti-American" comments about then-President George W. Bush.

Apparently, Lowe is really invested in all of the controversy surrounding Grande. Whether you agree with him or not, I know one thing remains certain: Chris Traeger, Lowe's character from NBC's Parks and Recreation, would've reacted passionately, too.

After all, Chris was a health nut, so he knew a thing or two about obesity and keeping the body fit. Here are a few ways Chris Traeger would probably react to Ariana Grande's apology, and the fact that she literally licked doughnuts.

He Would Encourage Her To Eat "Nature's Candy"

Stay away from those fried baked goods, Ariana. Raisins are the way to go. Plus, if you're caught licking raisins, it would totally back up your healthy eating stance and wouldn't force you to make an apology.

He Would Be Really Confused

He'd Applaud Her For Trying

Chris, who usually looked at the bright side of life, might give Ariana a round of applause for trying to apologize in a seemingly meaningful way.

He Would Dance Out His Excitement And Frustrations

What better way to express yourself than by dancing? Yep, Chris would probably be both excited by Ariana bringing light to the importance of eating healthy, but also frustrated that she even licked a doughnut.

Dr. Richard Nygard would clear it all up for him.

When a stressful and controversial event happens, Chris looks to exercise. Maybe that's what we all should do, too?

Let's face it: Chris Traeger is literally the best.