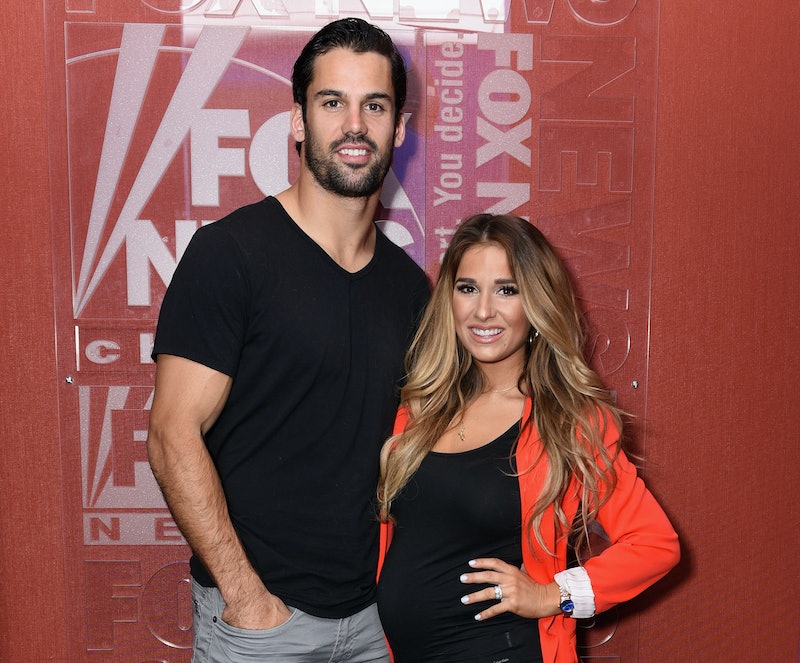 One thing's for sure: Jessie James Decker is head over heels for her man, and she's not afraid to show it. The country-pop singer and reality star, whose latest claim to fame is that she's currently the only judge left in the Miss USA Pageant on Sunday (many people involved pulled out following controversial comments from co-owner Donald Trump), often publicly shows her husband plenty of love — from social media posts to red carpet events. And all that PDA is likely to continue, considering the 26-year-old announced earlier this year that the couple is expecting their second child. So who is the lucky guy? Jessie James Decker has been married to Eric Decker since 2013; and if that last name sounds a little familiar, it's probably because he's pretty famous in his own right.

Jessie's husband is perhaps best known for his promising NFL career — Eric's been a wide receiver for the New York Jets since 2014. But the 27-year-old wide receiver isn't just a football star; he's also a reality television star, just like his wife. Yep, you may recognize Eric from Eric & Jessie: Game On, the E! show they've been starring in since 2013. Between his NFL career and reality show — which has already taped two seasons — Eric is clearly a busy guy. But despite the many hats he wears career-wise, it seems he also takes time to wear the most important one of all: that of a dedicated husband and father. And if this photo is any evidence, it's one he's more than happy to wear:

You can tell just by taking a glance at Eric Decker's Instagram how often he thinks about his wife and daughter, 1-year-old Vivianne Rose. After all, his feed is crawling with sweet posts and loving snapshots of his little family.

And if you've ever seen the pair walk a red carpet together... well, it's all pretty sweet and aww-inducing, if you ask me.

The power couple isn't shy about gushing over their love in interviews or on their show, either. When talking about their growing family on Eric & Jessie: Game On, Jessie said she hoped their story sends a positive message to other people who may be struggling to reach their career goals and find the person of their dreams:

A message [we hope to send] to a lot of young kids is that you can live your dream and you can find someone who makes you happy, and it’s a balancing act as well. It’s not always great. You are going to have struggles and tough times and that’s something that everyone goes through and people can relate to. [I hope viewers] take away that we are a fun loving couple that people aspire to be.

By the looks of things, it seems like they're doing a great job. Hopefully, we'll get to see a lot more adorable family photos and videos once Jessie gives birth to their second child.