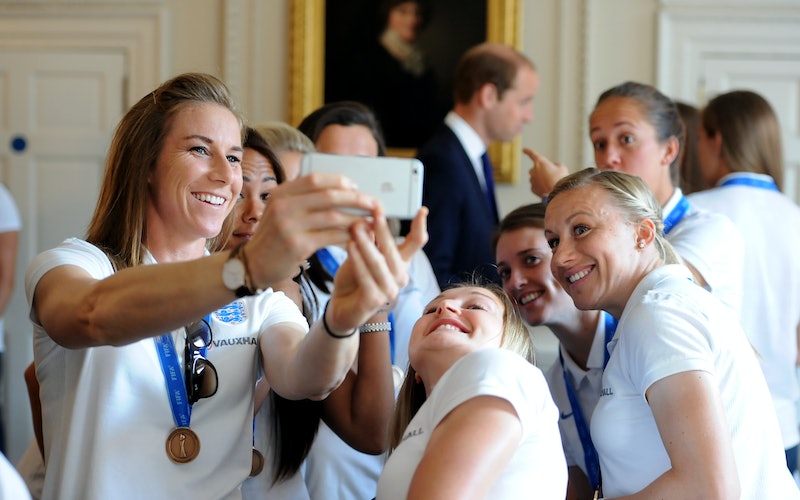 Prince William has already proven in the past that he can photobomb with the best of 'em. (Need I remind you of that time the prince bombed a photo with Olympic cyclist Chris Hoy back in 2014?) And now, the Duke of Cambridge has solidified his status as an Official Royal Photobomber once more. Prince William photobombed the entire English Women's Soccer Team at a breakfast reception at Kensington Palace in London. Needless to say, it was all sorts of awesome.

Before the breakfast, the Lionesses had recently returned from the World Cup in Canada, where they proudly took third place in the games. That's the highest achievement ever made for an England senior soccer team on foreign soil, so obviously Prince William had to offer them his congratulations on their success when they visited Kensington Palace. But what congratulations would truly be complete without a funny and sweet memento to take away from the gathering? This time, it just so happened to be an epic photo. And judging by team member Karen Bardsley's hilarious caption of the picture on Twitter, the ladies took it all in stride. ("The croissants though," it read.)

As these ladies probably know, the royal family has made quite a name for itself by jumping into otherwise innocuous pictures — and instantly making them amazing. Let's take a look back at some of the most memorable ones below.

With his latest photobomb at Kensington Palace Thursday, Prince William demonstrates exactly what makes a good one: looking just the right mix of sneaky and utterly conspicuous. The results? One hilarious photo. He appears to be either deep in conversation or deep in thought (or hey, maybe both) as the ladies lean in for a selfie. Little does he know he's about to blow up Twitter...

Is it really any surprise that Prince Harry would do an intentional photobomb? The notorious jokester decided to sneak into a picture with New Zealand officials at last year's Commonwealth Games, and it was equal parts hilarious and, well, hot. Harry, who was seated just a couple rows behind the officials, let his goofball flag fly proudly, by putting two thumbs up and grinning like crazy.

Prince Charles found himself in a bit of an unexpected predicament during an on-camera interview last March. This time, he wasn't the photobomber — his adorable grandson was. It all happened while the prince was discussing the importance of Earth Hour, which involves shutting off all non-essential lighting in your home for one hour as a statement of intent to protect the planet. There was only one problem: a framed family photo of Prince George was next to Prince Charles during the interview, which understandably distracted many viewers from basically listening to anything Charles was saying. But really, who can blame them? Prince George's overwhelming cuteness is highly distracting.

Who would've known the Duchess of Cambridge had it in her? Last year, Kate expertly pulled off a surprise photo appearance in a young fan's selfie while she was visiting Christchurch, New Zealand. And man, was it awesome. Just imagine how psyched the guy was when he saw the royal doing that high-five/fist-bump combo right behind him!

And now for what will probably live on as the best royal photobomb ever, starring none other than Queen Elizabeth herself: In the summer of 2014, two members of the Australian women's hockey team received an unexpected treat after taking a post-win selfie, when Queen Elizabeth II popped up in the players' snapshot. For all who hope to pull off a truly epic photobomb at least before you die, you may bow down now...

More like this
Kate Had A Solution When Tom Cruise Broke This Royal Rule At The 'Top Gun' Premiere
By Frances Stewart
Jake Daniels Just Became The UK’s First Active Football Player To Come Out As Gay Since 1990
By Sam Ramsden
What Is Jeanie Buss' Net Worth? The Lakers President Is Uber Rich
By Hugh McIntyre
Kaley Cuoco & Tom Pelphrey Just Made Their First Public Appearance As A Couple
By Hugh McIntyre
Get Even More From Bustle — Sign Up For The Newsletter