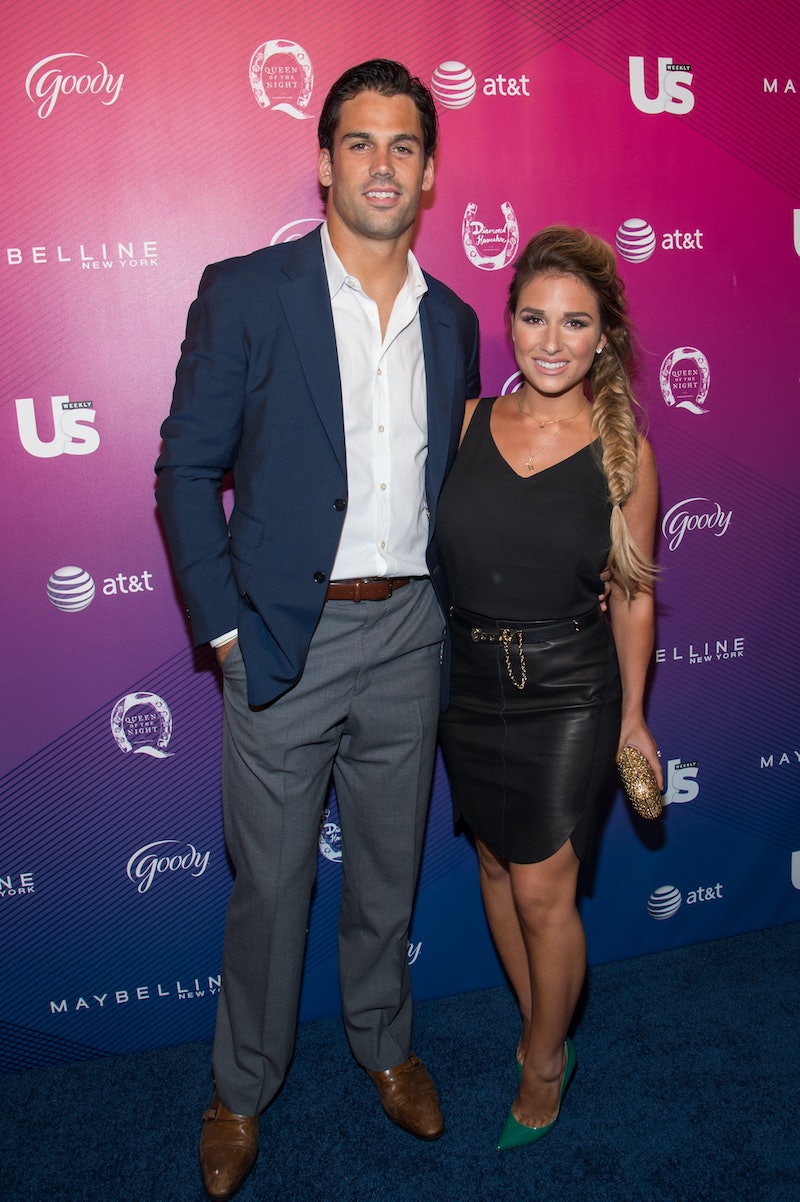 They may have only been mildly famous when their E! reality series Eric and Jessie: Game On! first aired back in 2013, but I'd say celeb power couple Jessie James and Eric Decker have both gained quite a bit of steam fame-wise over the last two years. But if you don't already know who these two are, allow me to acquaint you: Jessie James, 27, is perhaps best known for her country-pop singing and reality star career, though she's also recently added fashion designer to her resume. As for her 28-year-old husband, NFL player Eric Decker, you may know him as a wide receiver for the New York Jets. And the story of how this pair met is equal parts adorable and, honestly, a little awkward. Yep, as it turns out, famous people meet in the same weird-ass ways you do.

Not long after their Colorado wedding, Jessie and Eric sat down with Access Hollywood to talk about their meet-cute, which was — hmm how do I describe this... quick and efficient? "We met on Match.com," Eric first joked. But the real story, as told by Jessie, is that they met through a mutual friend.

"He was in Arizona training, and I got a text from my girlfriend who said, 'I'm having dinner with this guy I'm seeing, and this other guy just showed up, and he's stunning,'" Jessie said. So naturally, her friend snapped a photo of Eric and sent it to Jessie, who approved. "Show him a picture of me, and see if he's into it," Jessie told her friend. (Nice move, Jess.)

The rest was history. Er... well, sort of. According to Jessie, the couple video chatted, texted, and talked on the phone for a month before Eric finally "invited himself" out to Nashville. After all, "you can't just have this cyber-relationship," he said. (And I'm sure anyone who's ever been on Catfish would totally agree with him.) Apparently, Jessie got a little nervous and cancelled his flight out the first time. (Which, by the way, I totally get that — because while he may be super hot and all, I'm sure the whole thing seemed a tad creepy at first.) But when they did finally meet, the couple says they both hit it off right away, and have been together ever since.

Chatting with Access Hollywood, they also reminisced about their wedding and their honeymoon, and it's clear that they are probably that couple who irritates all their friends by just how in love and obsessed with each other they are. As for how their wedding day went? According to Eric, it was "even better than how we imagined it." Clearly they were meant to be.

Since then, Jessie and Eric have been busy raising their family, which they pretty much started right away. In March 2014, Jessie James gave birth to a daughter, Vivianne Rose, and earlier this year, Decker announced she's expecting again — this time a boy. In between, the couple's been busy gushing about their love all over Instagram. You'd almost forget that they were famous, if not for the fact that they have a whole reality show dedicated to their marriage. But if there's anything we can learn from Jessie James and Eric Decker, it's that sometimes, lurking on your friends' friends totally pays off and works out.