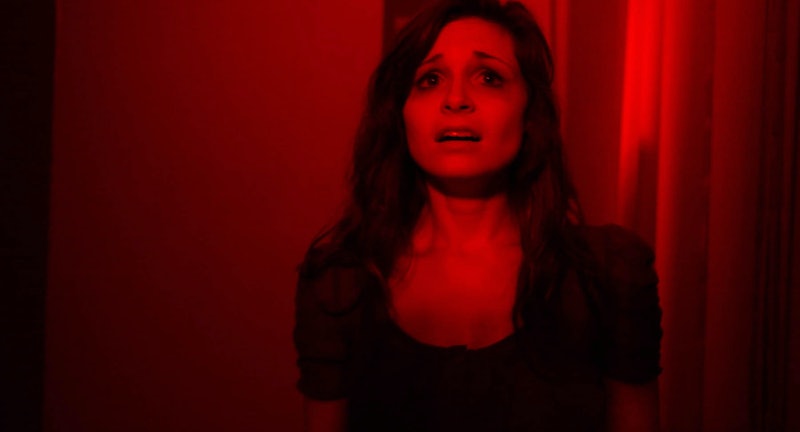 The found footage horror movie genre has found its way to the stage of the fictional high school in Beatrice, Nebraska in The Gallows . The new film, out Jul 10, puts the spotlight (pun intended) on a group of students putting on a play appropriately called The Gallows — but there's a spooky story behind this show. 20 years ago, a group of students put on the same exact play, but it ended in a horrific accident where one of the students, Charlie Grimille ended up dying. As a result, a superstition surrounds the drama department. For one, saying "Charlie" on stage is strictly forbidden and there are rumors that his ghost still haunts the school. That said, it's the urban legend that poses the question: Is the play in The Gallows real?

I hate to pop your horror movie bubble, but the show was solely created for the film. In an interview with HollywoodChicago.com, co-writers/co-directors Chris Lofing and Travis Cluff admit that the play-within-the-movie was a work of fiction — but it still became something of a character on its own. Lofing says that the filmmakers "created it, but we kind of want it to live on its own mystery."

In the movie, the play takes place in a Renaissance-esque era and is about a nobleman trying to win the heart of a woman by being something he is not. Sensitive jock-type Reese (Reese Mishler) plays the role of the nobleman and the woman is played by drama geek Pfeifer (Pfeifer Brown). How meta.

Said Cluff, "It has a life-imitates-art kind of feel, because the story in the play is the same as what is happening to the kids in the present tense."

The play/movie/TV show-within-a-movie device has been used in many movies to drive the narrative. Here some that came before The Gallows:

1. Springtime for Hitler: A Gay Romp With Eva and Adolf at Berchtesgaden in The Producers

We probably won't see a real-life version of the fictional musical about Hitler in Mel Brooks's musical-turned-movie-turned-remake with Matthew Broderick and Nathan Lane, but seeing how funny it was, I kind of hope that it might become a reality.

Is there really room for a sequel to the Shakespeare tragedy? According to a delusional drama teacher in Hamlet 2, yes. And it's as politically incorrect and hilarious as you would want it to be.

3. The Stab movies in the Scream movies

In Birdman, Michael Keaton's character adapts a short story by Raymond Carver into a play to help resuscitate his acting career. The short story is real, but the play is not.

The TV show was all about making a musical about Marilyn Monroe... and the more they performed numbers from it, the more I wanted it to be true.

6. Red, White and Blaine in Waiting For Guffman

The play in Christopher Guest's cult mockumentary wasn't a real thing... until someone decided to make it into a real thing.

As you can see, there are many fictitious plays, in movies and television — some of them I'd want to be real, others, like The Gallows, that I am very glad are not.

More like this
'Stranger Things' Star Joe Keery Is Dating An "Indie Scream Queen"
By S. Atkinson and Grace Wehniainen
Shocked Fans & Former Co-Stars React To Ray Liotta’s Death At 67
By Grace Wehniainen
Laura Dern Said “Cultural Awareness” Made Her Rethink This 'Jurassic Park' Fact
By Grace Wehniainen
The 'Hocus Pocus' Sequel Finally Has A Release Date & It Makes Total Sense
By Shannon Barbour and Radhika Menon
Get Even More From Bustle — Sign Up For The Newsletter