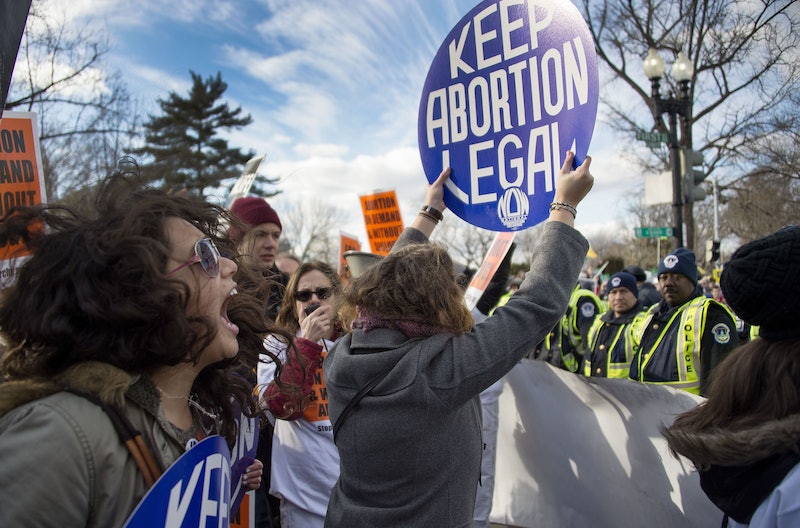 Whether or not legal abortions are safe procedures is continually debated, but the fact of the matter is that we already know the answer to that question: According to a new study, abortion related deaths are extremely rare, with only 0.7 deaths occurring per 100,000 abortions in the United States, or a rate of about 0.000007 percent. Not only that, but this is far from the only study to come to the conclusion that abortion is incredibly safe. So why will some people not accept that? I don't know, but it flies directly in the face of science.

These new numbers were released this week by the Centers for Disease Control and Prevention (CDC). According to their numbers, which look at abortion data from 1998 through 2010, about 16.1 million legal abortions were performed in the U.S. during that time. 108 women were found to have died as a result of the procedure, which shakes out to about 0.7 deaths per 100,000 abortion — and which is actually far safer than childbirth. According to the CDC, 650 women in the United States die each year as a result of pregnancy or complications during delivery.

"I think we are encouraged to see that deaths related to legal abortions continue to be rare, but there's always more that we can do from a public health perspective to prevent further death and disability," Brittany Behm, a spokesperson for the Centers for Disease Control and Prevention told The Huffington Post.

The numbers show that abortions are slightly more risky during the second trimester than the first. In addition, other studies have shown that illegal abortions are much less safe. The drastic drop in abortion-related mortality in the US following Roe v. Wade makes that quite clear. Legal abortions however, which are performed in by licensed health care providers and in clean and safe facilities, are extremely safe.

These new CDC numbers are far from the first ones to demonstrate the safety of abortions — and yet myths about abortion being unsafe persist. Anti-choice websites are openly hostile to the idea that abortions might be safe for women, and many seem openly gleeful about any study, no matter how limited or small, that suggests abortion might increase a woman's risk of dying. And yet this doesn't change the fact that most of the scientific literature supports the idea of abortion as very safe.

For instance, this study from 2012 found that the mortality rate from abortion was markedly lower than the mortality rate of childbirth. A 2014 study found that the mortality rate due to abortion was lower than the rate of deaths resulting from plastic surgery, dental procedures, marathon running, or cycling. Another 2014 study that looked at over 50,000 abortions over the course of two years and found fewer than one quarter of one percent resulted in major complications. A study of medical abortions at Planned Parenthood found that fewer than one percent of women had any complications from the procedure.

And the evidence really only continues.

So in light of all that, why is this still a point of contention? Why is there an anti-choice group spreading misinformation about abortion safety using the domain name prochoice.com, or a website called Abortion Facts claiming abortion is more dangerous than childbirth? Why are people so bound and determined to convince women that this procedure is actually going to kill them, when the truth is that when it's performed legally, it's safer than dental surgery? And why, why, oh why, do we keep having to spend so much time and so many studies repeatedly refuting this already debunked claim?

As happy as I am that the CDC does keep track of the safety of abortion and other procedures, I'd also like it if the scientific community as a whole didn't have to keep going over this and could instead devote their resources to figuring out other important health issues. But maybe that's just me.

More like this
How To Fight For Reproductive Rights, Based On How Much Time You Have
By Courtney Young
Michigan’s Governor Is “Going To Fight Like Hell” To Protect Abortion Access
By Andrea Zelinski
5 Crystals For Anxiety
By Megan McCarty
5 Crystals To Manifest Better Sleep
By Megan McCarty
Get Even More From Bustle — Sign Up For The Newsletter