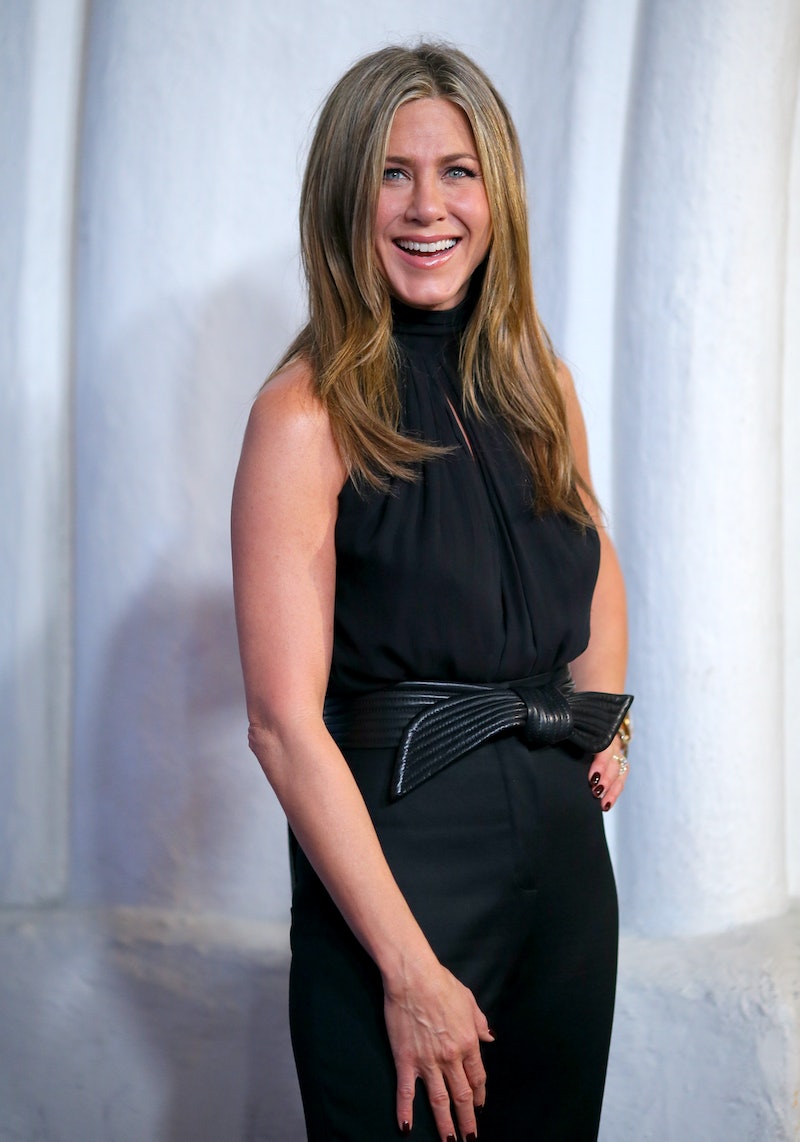 Are they or aren't they? That is the question on everyone's lips after the latest rumor about Jennifer Aniston's love life recently surfaced. As it turns out, Jennifer Aniston and Justin Theroux may have gotten married already. Or they may have not. Bustle has reached out to Aniston and Theroux's reps for comment, but has not yet heard back.

Aniston, who is usually low-key when it comes to love and relationships, reportedly got hitched to Theroux in the backyard of their $21 million Bel-Air mansion "earlier this summer," according to Life & Style. Hmm. It is worth taking in this news with a healthy dose of skepticism. After all, Aniston has been falsely reported being married dozens of times by multiple tabloids. In fact, she has been falsely reported being engaged, married, pregnant, and sad and alone all in a matter of weeks in the celebrity gossip sphere. (The reports can't all be true, people!)

However, it is also worth keeping in mind that Aniston is one of those celebrities who does not reveal everything that is happening in her life right away. So it would not be totally strange if she had a secret wedding (if not now, maybe later down the line.) And honestly, it's cool that Jen doesn't spill all the details of her life; it's fun that she constantly keeps us guessing. So for the pure fun of speculation, lets do a small investigation into whether these two are or aren't married.

One sign that they could have sneakily tied the knot is Justin Theroux's known habit of wearing a "gold chunky ring" when they were (are?) engaged. As Aniston dished to People in June, "When we get married he will be wearing his ring. It just won't say Justin anymore." She added that the ring he currently wears might instead say Jen "on the inside." On the inside, huh? Well, that could slip right past a photographer. How convenient! There is a bonus sign here — this quote proves that they are at least far enough along in their engagement that they have discussed intricacies like ring design. And the plot thickens...

On the other hand, the actress has not been spotted with any extra rings that would indicate her status as a married woman. That's an important piece to the puzzle missing here. Also, the pair has not been spotted on any major vacations lately. Considering their affinity for trips to Mexico and Italy and the like, you would think that they would want to cap off their marriage with a fabulous honeymoon getaway. In fact, they were recently spotted at a low-key Fourth of July hangout with Sandra Bullock and Jason Bateman. Well, that sounds fun and all, but that doesn't exactly sound like something newlyweds would be doing to celebrate their big day.

Of course, the most important sign that they did not get married is that they have not released any sort of comment about these hypothetical nuptials. I guess we will have to wait and see.