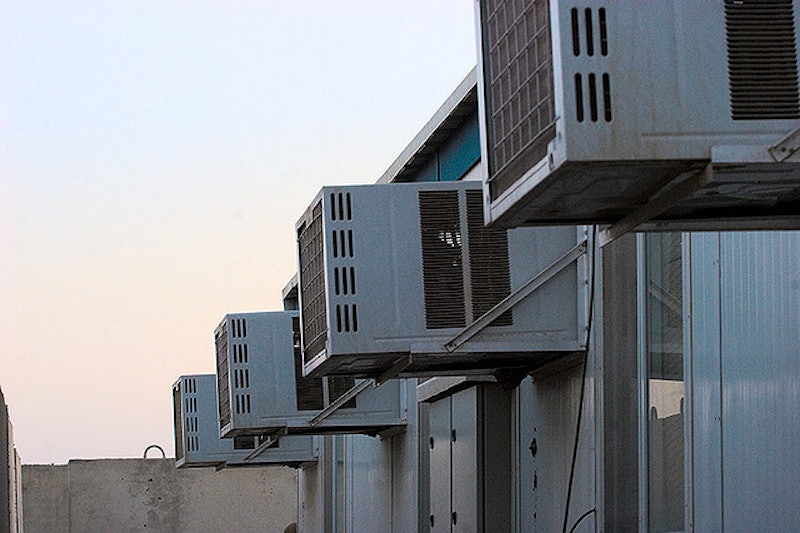 In a recent Sunday Review about the perils of "over air-conditioned America," The New York Times tells us we should be ashamed for our energy-hogging A/C settings, which cause people to "pull on parkas to go to the movies" and court judges "to pause proceedings so bailiffs can escort jurors outside the courthouse to warm up." And yes, anyone who has worked in an over air-conditioned office building can attest that it's obnoxious to dress for a 95-degree day, only to get to work and freeze your ass off.

But this is also a super privileged person problem. And it's borderline dangerous to position yourself on a moral high ground for turning down your A/C when that's a huge, largely geographical privilege. Heat kills. No one would preach from a position of moral superiority for turning your radiator down in the deadly winter months. As Slate points out:

"It’s a function of the climate where they live. In New York City, winters are unlivable while summers merely suck. In another state, that formulation might have to be reversed...[The NYT's] rhetoric suggests a narrow-minded point of view that holds up the radiator as a natural right, and the AC as self-indulgent. That’s provincialism in the guise of ecoconsciousness. To inveigh against the air conditioner is to claim that someone else’s discomfort isn’t worth the same as yours. It pretends that feeling hot and feeling cold are in different moral categories."

Which like, what kind of BS is that? Air-conditioning actually takes up significantly less energy than heating: it takes four times as much energy to heat a home than it does to air-condition it. And it's awfully glib to chide people with the privilege of access to office jobs and department stores for their over air-conditioning, when the people most likely to die in heat waves are the poor and elderly, who don't have or can't afford access to an A/C. Racial disparities exist, too:

"Black and impoverished families are more likely to be without a mode of cooling, other things being equal, and they’re more concentrated in the South, where cooling helps the most. Disparities in access to AC produce the sort of tragic inequalities that should make people uncomfortable: According to recent data from the Centers for Disease Control and Prevention, black Americans are 1.4 times more likely than white Americans to die from cold weather, and 2.6 times more likely to die from heat-related illness."

It's page straight from of the equally out-of-touch GOOP book of healthy eating habits. If you have 20 bucks to spend on a bag of gluten-free flour, you're a good, responsible, moral, socially- and ethically-conscious human. If that's not something you can afford, well then, you're contributing to the downfall of planet earth, and your personal health, and your children's health and future, so I hope you can live with yourself, you monster.

Heads up: you're not a bad person if you need to turn the A/C on in your apartment on a 90+ degree day. You're not a bad person for setting up shop with your laptop in a Starbucks (perhaps with a cardigan handy) on such a day, either, if you can't afford to rack up your electric bill, but have work you need to get done. Maybe the New York Times could set up operations in an un-air-conditioned bodega for a day this summer and get a clue.

More like this
How To See The Lunar Eclipse On May 15-16, 2022
By Kaitlyn Wylde
How To Fight For Reproductive Rights, Based On How Much Time You Have
By Courtney Young
What To Know About Taking More Than 1 Piriteze Per Day
By Bustle UK
5 Crystals To Manifest Better Sleep
By Megan McCarty
Get Even More From Bustle — Sign Up For The Newsletter