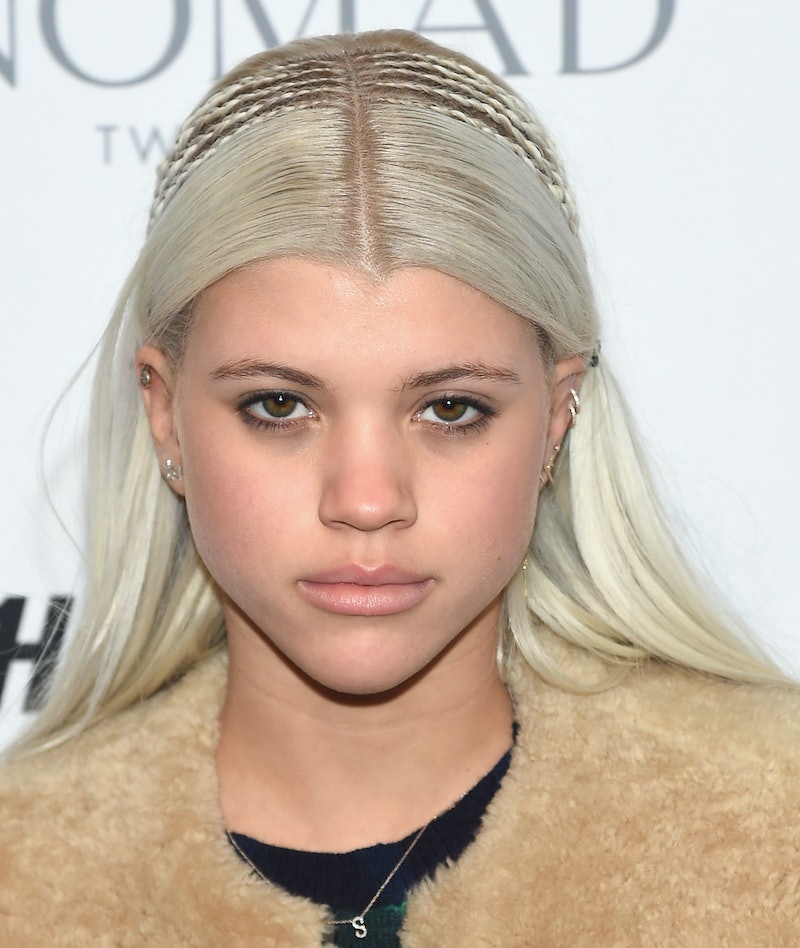 Move over, Nicole! Sofia Richie is Status Magazine's July cover girl, and the 16-year-old up-and-comer proves yet again that despite having a seriously famous family, she is more than capable of holding her own as a model and style star.

Rocking a slick, pin-straight 'do and a center part along with a no-nonsense '80's-style jacket, Richie totally embodies her story's title, "Sofia Richie Ain't Kidding Around." With a pedigree like hers — her dad is Lionel Richie and Nicole Richie is her sister — she was literally born to do this; one glance at her Instagram account shows that although young, she's already got a trademark look. That said, she is totally fearless when experimenting with her hair, which she's worn in braids, beehives, and bleached blonde.

The model, who is signed with Select Model Management, is an honorary member of the so-called brat-pack, which includes fellow celebuspawn Kendall Jenner, Bella and Gigi Hadid, and Hailey Baldwin. She's already got a portfolio packed with editorials, like work for Dazed, V Magazine, and the cover of ASOS's in-house magazine, where she showcased her trademark cool-girl style. (Speaking of the brat-pack, Kendall Jenner covered Status' June issue. #Squadgoals.)

Here she is on the cover, clearly not kidding around:

Inside the magazine, she wears a rainbow crop-top over a white tee with high-waisted jeans and a headful of pigtail ponytails.

In terms of style, she learned from the best — her sis. Nicole Richie has come a loooong way since her days as Paris Hilton's sidekick on The Simple Life, and has risen to icon status that actually eclipses Hilton's, at least in terms of fashion envy.

While Sofia's stilo is decidedly '90s to Nicole's boho, '70's look, the Richie-girl level of finesse is unmistakable.

Here are her top looks, from endless summer days spent in shorts and sneakers to full-on NYFW attire.

Channeling vintage Kate Moss in nothing but CK undies and boyfriend jeans.

That braid though! Shades of black and grey make her icy blonde hair pop for this winter look. Khaleesi who?

This is the ultimate off-duty look. Seriously, where those knee-slits ripped by angels?

So fresh and so clean in a side-slitted skirt and purple sneakers.

She may have just gotten her driver's license, but she is definitely giving her older sister a run for her best-dressed title!