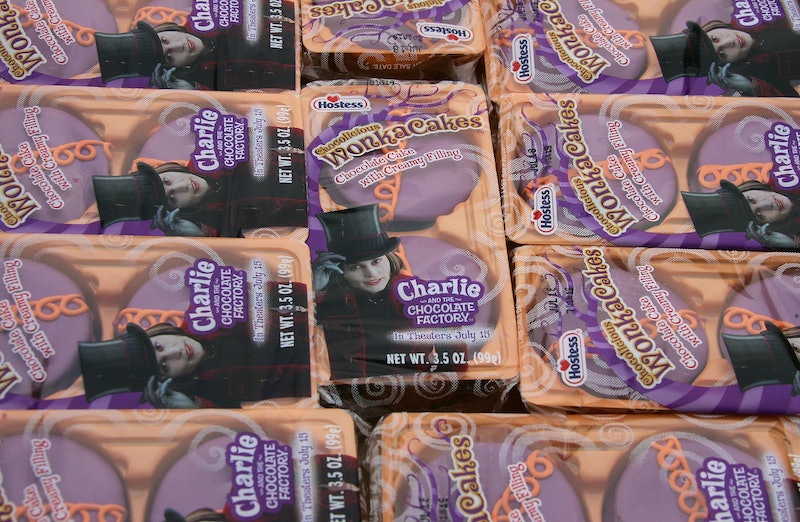 I think we can all agree that food is awesome, but somehow, the movies and TV have this way of making food look even better than real life. Fortunately, reality has one advantage to movies: You can actually eat what's in front of you. Tim Burton's Charlie and the Chocolate Factory has desserts you can recreate from the movie, which is celebrating its 10th anniversary. Since its release in 2005, fans of both the movie and the Roald Dahl novel on which it was based have been trying to capture the magic of the titular Chocolate Factory with real-life recipes. And they all look so delicious.

When Burton was filming the movie a decade ago, he opted for a real chocolate river — no CGI at all — filled with 192,000 gallons of faux melted chocolate deliciousness. It's what dreams are made of. Having seen the first film, we wanted to make the chocolate river look edible," production designer Alex McDowell told the Los Angeles Times. Not only does the river look yummy, but so do all of the other treats featured in the film. You can try to recreate all those goodies in real life, because Dahl actually published a book of recipes before his death, called Revolting Recipes . There are also lots of food bloggers who have done just that and have shared the recipes with the internet. Check 'em out below.

Bryton Taylor of the blog Food in Literature has created many Wonka treats from the book Charlie and the Chocolate Factory, including this infamous gum that that turns Violet very blue.

In the movie, Willy Wonka boasts that his factory is the only one in the world to mix his chocolate river via waterfall. Well, now you can too, thanks to Dahl's recipe, which requires "an adult to help you," so make sure you find one of those.

Be like Charlie and find your golden ticket in this delicious candy bar. Taylor also created this decadent chocolate bar for her blog. Dahl published a version of the treat in his cookbook as a sauce for a sure-to-be-Wonka-licious ice cream sundae.

Blogger Little People Loves recreated the landscape of The Chocolate Room on a more miniature level for her son's first birthday. See how she did it for a Willy Wonka-themed birthday party.

The Chocolate Room is known for its "eatability," but also its giant lollipops. Hungry Happenings can help you make the more healthy version: Giant lollipops made of fruit.

Let's face it: We'd all want one of these. English Chef Heston Blumenthal took it upon himself to recreate one with scrumptious results (above). Willy Wonka would be proud.

More like this
What Does Doctor Strange’s Third Eye Mean?
By Arya Roshanian
What’s New On Netflix: A Victoria Justice Rom-Com & The Return Of David Letterman
By Arya Roshanian
Lisa Marie Presley Reviewed Baz Luhrmann’s ‘Elvis’ Movie On Twitter
By Grace Wehniainen
9 Films About Mental Health To Watch On Netflix UK
By L'Oréal Blackett and Sophie McEvoy
Get Even More From Bustle — Sign Up For The Newsletter