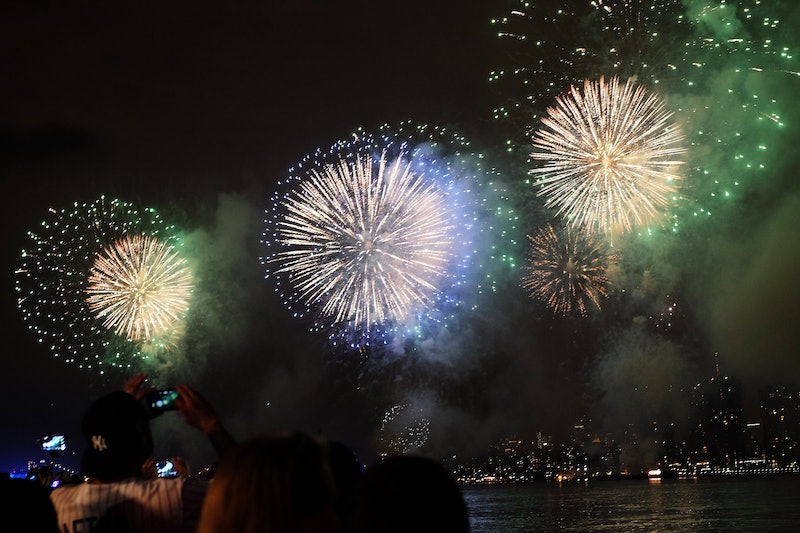 On Thursday, FBI director James Comey released a statement revealing that the FBI stopped several ISIS related Fourth of July attacks. Though Comey didn't state how many plots there were, or the details of any cases, he did say that the attempted plots ranged from coast to coast, and were intended to take American lives. Leading up to the holiday weekend, local law enforcement agencies were encouraged to take extra precautions, and be aware of possible terror attacks. Within the past four weeks, there have been 10 ISIS-related arrests.

It's important to note that, as far as Comey told the public, none of the thwarted plots were formally sanctioned ISIS attacks. Instead, these plots were "unsophisticated" and were ISIS-inspired rather than ISIS-endorsed. Leading up to the holiday, the terror organization made calls encouraging ISIS sympathizers to attack in any way possible, and as such many of the foiled plans involved guns, knives, and other close range weapons.

News that the attacks were foiled is reassuring, as it gives proof that the FBI is combatting domestic terrorism, but it's also terrifying when you look at these potential plots in context of what might have happened. ISIS's influence is reaching beyond the Middle East, and their fighters are growing more sophisticated in the way that they communicate with American residents.

Social media and Twitter are increasingly opening up new opportunities for recruitment, a technique that Comey refers to as "crowdsourcing terrorism." A prominent ISIS Twitter has 21,000 English speaking followers, according to CNN, and many ISIS fighters have individual accounts with equally large following. These accounts allow them to initiate contact with Americans or English speaking individuals who follow ISIS related accounts.

According to Comey, these interactions result in private messages via Twitter, where information is exchanged on how to communicate further in a secure or encrypted way. Although Twitter has been blocking accounts and aiding the FBI, once moved off the social media site, following them becomes more difficult. As a result, the FBI struggles to gain further intelligence on the correspondence, due to sophisticated encryption and cybersecurity measures. It's a technique that has disturbing success rates for ISIS, and is just one of the many they employ to win over disenchanted, lonely, or overzealous American youths.

Despite having in depth knowledge about the way the recruitment process works, the FBI continuously hits security barriers. Because of this, Comey says that social media's influence and power to recruit makes it difficult for U.S. authorities to keep up. According to CNN, there have been 49 ISIS-related arrests during 2015, but Comey alleges that dozens other Americans are communicating with terrorists.

"We estimate upwards of 200 Americans have traveled or attempted to travel to Syria to participate in the conflict,” Comey said in a statement during a Senate Intelligence Committee hearing. The hearing was at the behest of The FBI, who, along with other authorities, have called for large tech companies and cybersecurity firms to supply them with "keys" or backdoors into their systems, in order to expand their ability to monitor ISIS threats.

These requests for easy access to private information have many tech companies taking a hard line, and advocating against it. Many point out that, in comparison to other countries, the U.S. yields a very low number of ISIS recruits, and the number of recruits has stayed relatively level, even as the terrorist organization becomes more influential worldwide. And, security threats aside, Comey's request could potentially have worrisome side effects in regard to safeguarding American privacy in a post-Patriot Act country. In addition, these "keys" could be used as weaknesses by foreign countries such as China, or by ISIS itself.

But despite these concerns, Comey and other advocates are jumping at any measure to help aid the fight against ISIS and their social media influence. "We are creating safe zones where dangerous criminals and terrorists can operate and avoid detection," said Deputy Attorney General Sally Quillen Yates, who agrees with Comey's concerns, and went on to further highlight the domestic ramifications of such tight security measures.

It impacts us in two ways: we can’t get access to information that is stored on someone’s smartphone, like a child pornographer’s photographs or a gang member’s saved text messages, known as data at rest. And we also can no longer effectuate wiretap orders to intercept certain communications as they happen, like ISIL members plotting to carry out an attack in the U.S., or a kidnapper communicating with a coconspirator.This is known as data in motion. These technological changes come with real national security and public safety costs.