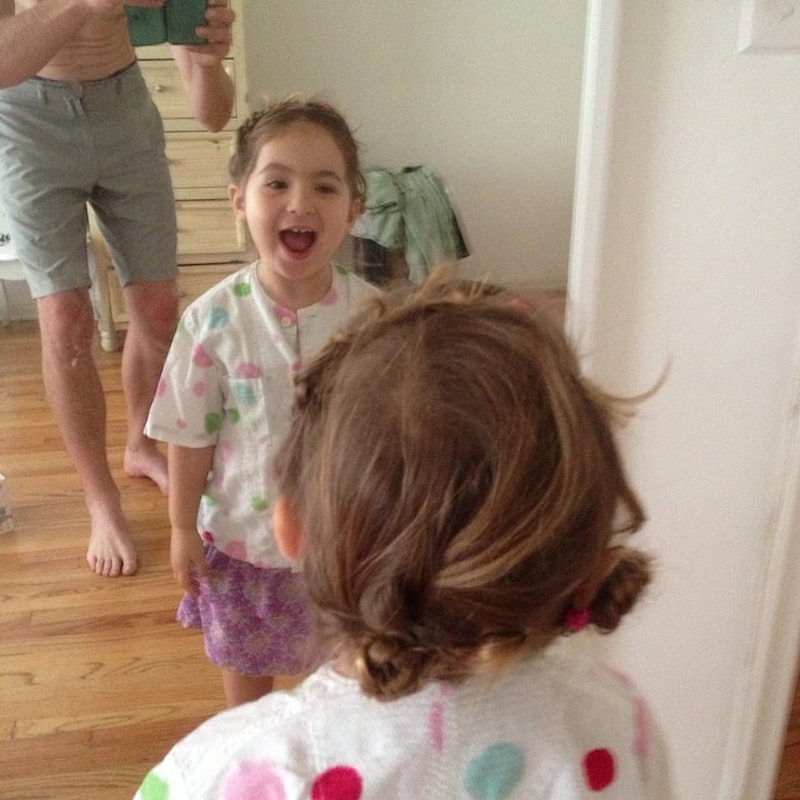 For the most part, it's our moms who are tasked with doing our hair when we're kids. I remember very clearly when my mom would attempt to wrangle my ultra thick hair into a ponytail holder, and it was a nightmare. However, moms aren't always the ones responsible for getting kids ready in the morning, and dads who get their kids ready in the morning — be they single dads or stay at home dads — need to learn how to make sure their daughter's hair won't fall out of its ponytail holder midway through the day. That's probably why some dads are taking braiding classes at an Upper West Side salon in New York City, and the result is both practical and adorable.

We all remember when Chris Pratt adorably braided an intern's hair after it was reported that he did the same for his daughter. Now, dads everywhere can be a bit more like Starlord. Cozy Friedman of Cozy's Cuts for Kids Salon started the classes for mom's looking to expand their skills, but eventually expanded. Friedman says, "Dads want to learn. I hear it all the time. But you can see right away on the playground whose hair was done by her dad. We’ve really had to start with the basics here.” So that's exactly what they did. The dads learned detangled and brushing skills before moving on to their more advanced ponytail styling and braiding.

Friedman taught the fathers a useful and appropriate acronym when thinking about doing their daughter's hair: D.A.D. The letters stand for Distract, Arrange, and Detangle. The fathers should distract the kids with something, arrange the hair into sections, and detangle with a detangling spray. Some of the dads were definitely getting the hang of it by the end of the day, too! One of the dad's said that the styling was easier now that it was his youngest child — presumably because he'd had more practice. That didn't stop his daughter from insisting he pull on her hair less though.

No matter what the reason, whether it's simply because they want to help out their partners or are single dads helping get their daughters to school in the morning, these fathers are endlessly adorable for working so hard to learn. While not everyone can be Chris Pratt, at least they'll be able to get somewhat close.