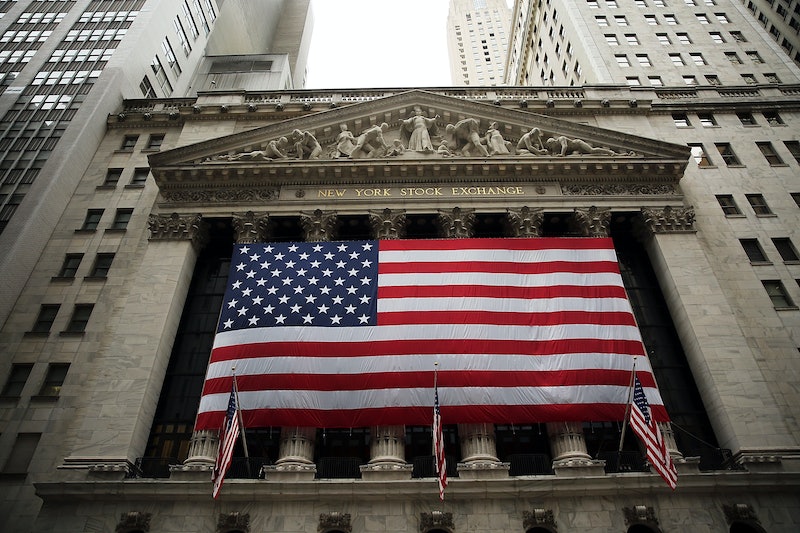 In the midst of heated drama surrounding the Confederate flag, the American flag itself received minimal attention. On Thursday, South Carolina's House of Representatives decided to remove the Confederate flag from state Capitol grounds, but the American flag still means different things to different people. To some, it remains a bright symbol of freedom, prosperity, and independence. To others, it represents still-developing notions of equality. Unlike the Confederate flag, it's been quite a while since rules for handling the American flag have been modified or publicly discussed (Congress' most recent report regarding the flag was released in early 2011), and the surprisingly old-fashioned and, at times, overly-patriotic rules certainly reflect this.

Sure, there are definitely some pretty reasonable ground rules in the flag code, but most of them are self-explanatory. That's why the interesting rules for displaying and handling the American flag are the ones that prohibit you from doing things you probably never would have even thought about doing in the first place. Other interesting rules come across as outdated and pretty pretentious, while a surprising amount of rules for handling the flag concern advertising and display.

1) "The Flag, When It Is In Such Condition That It Is No Longer A Fitting Emblem For Display, Should Be Destroyed In A Dignified Way, Preferably By Burning."

You'd think there would be a strict rule prohibiting you from burning the flag, but the 2011 Senate report actually reminds us of a 1990 Supreme Court ruling that upheld protesters' constitutional right to burn the flag in public protest. Even more surprisingly, American flag rules actually regard burning the flag as something "dignified" if it's no longer "fitting ... for display." However, the rules leave it up to you to determine what that looks like.

2) "The Flag Should Never Be Used As Wearing Apparel, Bedding, Or Drapery."

Do you remember how Lana Del Rey sings: "I fall asleep in an American flag" in her song "Cola?" Well, someone had better draw up an arrest warrant for her, because apparently, using the flag as bedding, or apparel or drapery, for that matter, is against the rules.

3) "The Flag Should Never Be Used As A Covering For A Ceiling."

If you're ashamed of your bedroom ceiling, it looks like you're gonna have to find something else to cover it.

4) "If The Flag Is Suspended Over A Sidewalk, The Flag's Union Should Be Farthest From The Building."

I'm not entirely sure what the point of this rule is, but I appreciate how specific it is.

5) "When Flown With Flags Of States, Communities, Or Societies On Separate Flag Poles Which Are Of The Same Height And In A Straight Line, The Flag Of The United States Is Always Placed In The Position Of Honor — To Its Own Right."

Personally, I think respecting the flag is one thing, but aggressively defending a superiority complex is another. Pride in your nation is great, but let's not forget that excessive nationalism has embroiled America in, at times, not so moral international situations throughout history. Other similar flag rules concern how to properly display the American flag when among other flags for parades or speeches.

6) "The Flag Should Never Be Carried Flat Or Horizontally, But Always Aloft And Free."

Once again, not too sure what the point of this rule is, but as ever, I'm all for freedom.

7) "The Flag Should Never Be Used For Advertising Purposes In Any Manner Whatsoever."

So I guess Kanye West was on to something in his track "All Falls Down" when he warned us "we can't buy freedom." Thanks, Kanye!

8) "When Used On A Speaker’s Platform, The Flag, If Displayed Flat, Should Be Displayed Above And Behind The Speaker."

This rule doesn't really apply to the Donald in the above photo because quite characteristically, instead of the flag, he opted to display his name on the platform.

9) "The Flag Should Be Raised Briskly And Lowered Slowly And Ceremoniously. Ordinarily It Should Be Displayed Only Between Sunrise And Sunset. It Should Be Illuminated If Displayed At Night."

10) "The Flag Should Never Touch Anything Beneath It, Such As The Ground, The Floor, Water, Or Merchandise."

Actually, by now I'm pretty sure most people are aware of this rule. However, that's not to say most people understand its purpose.

11) "The Flag Should Never Be Dipped To Any Person Or Thing. It Is Flown Upside Down Only As A Distress Signal."

Maybe Donald Trump should provide his audience members with small flags at all his speeches. At least to me, his bizarre, racist, and demagogue-like rants are pretty distressing.

If you're worried that you've violated any of the above rules, don't stress out too much. The code on flag rules didn't specify any measures for enforcement or punishment. The rules can more or less be taken as some interesting regulations to look out for.