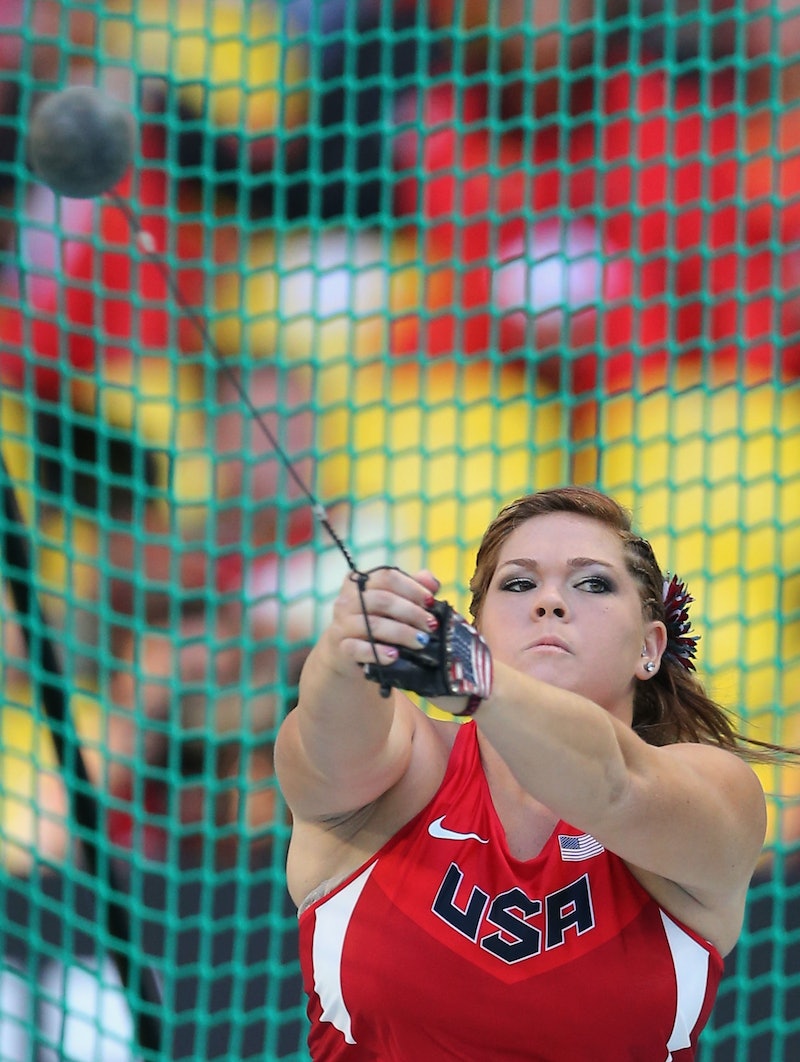 Over the course of the past week, Amanda Bingson — one of the six athletes chosen to appear nude on the cover of this year's ESPN Magazine's "Body Issue" — has quickly become an international icon based on her strength, candor and body positivity. The 5'5", 210 pound USA Track & Field Hammer thrower has stripped away body shame with her fearless, striking cover, inspiring countless readers with thoughts like "I'll be honest, I like everything about my body." Bingson's candid interview — as well as her pictures and glorious attitude — have encouraged many to challenge their negative self-talk, and start trying to appreciate their own beautiful selves.

I had tears in my eyes as I read her story, and recognized my own insecurities staring back at me. As a mother of two who works in front of the camera, I've always struggled with my weight and body image. Bingson's story moved me, and so I was thrilled for the chance to speak with her.

And after just minutes of talking with Amanda Bingson, it was clear that Bingson is legit. She's more than just an Olympic athlete striving for gold — she's also a real person who is dedicated to breaking down beauty standards, one great quote at a time. In a time when most interviews with athletes are full of canned responses and generic quotes, Bingson is a breath of fresh air. She has captivated this country and motivated us all to become a bit more accepting of our selves. She spoke with me about confidence, understanding yourself and how she ended up on ESPN's cover.

How does one even get on the cover of the Body Issue? Do they call you, do you have to apply for it?

Amanda Bingson: My publicist is beyond words amazing and they hooked it up. They contacted ESPN and asked them if they’d be interested in having a hammer thrower on the cover. And then ESPN was like, "Sure, why not, let’s do something different." And here we are.

What was your reaction when you heard they accepted and you’d be posing nude?

A: No! They called me and said, "Are you sitting down? You got the cover." I was like, stop lying, because it doesn’t happen — this isn’t real life right now. It’s been so surreal and I can’t even believe how much traction it has. It’s been amazing.

What was it like to shoot the cover — did you have any fear? I’m assuming you haven’t posed nude before?

But of course once you get into the moment, the nerves start coming and you start shaking. But Peter, the photographer, was so amazing and so professional, and everyone on the set was so supportive in what I was doing. They even told me, "Hey we’re so excited that you are doing this, you’re a real woman with real curves and thank you for doing this." I was like, "Ahhhh, you’re going to make me blush."

It is amazing and inspiring. You’ve empowered men, women, and anyone really that’s struggled with body image. How does it feel to know that you’ve touch and encouraged so many with your words and pictures?

A: It’s really just, like, blown my mind. When I first signed up to do this and I decided to do this, I never thought it would turn into what it has. People are throwing around words like "role model," "inspiration," "pioneer for bigger girls"...it’s just been so surreal. I think it’s something that needed to happen, I just never thought it would actually be me doing it.

A: No, not at all. I thought I was just going to be the one person in the back by the ads and no one was going to look at it. Or people would say, "Oh, that's cute." But for it to have the traction that it’s had, and being on the cover and just getting all this unbelievable support from everyone around the world, it's just more than I could have ever imagined.

Once you have one thing to be proud of, and you’re confident about, then life just gets easier.

Reading your interview, you seem to just get it. Have you always been this comfortable in your skin?

A: For the most part, yeah, because my parents did such a great job raising me and showing me that it’s OK to be different. We grew up on a construction site in Las Vegas, my parents owned a construction company. And while my sister was in the office pushing papers and doing computer work, I was in the backyard pouring the concrete, lifting mailboxes, and doing the labor work.

And I remember asking my dad, “How come I have to go outside and do all this, and Morgan gets to sit in the AC and never sweat?” And he said, “It’s because you can do this physically, and she can’t. It’s not good, it’s not bad, you have to do what you’re good at. This is where we need you.” This really put it into terms for me. It’s not good or bad, I’m just different.

I know you've been receiving loads of messages and tweets — what's surprised you the most about all of the people that have contacted you?

A: What’s surprised me the most is everybody goes through some kind of body image, self-awareness, or self-confidence issue. But what I’ve been noticing is a lot of parents have been contacting me about their 9-year-old daughter or son that’s being picked on. I just think that’s so disturbing that kids are being called fat. And they’re sending me pictures and they’re not even fat, they're just thick. They’re athletic...if I was their age, I’d be running all over the field! I think it’s just so amazing that I’m giving them the eyes to see that there are other things out there than the things we see in the media.

Girls, men, women, anyone that messages you or approaches you and says they are struggling with body image — what do you want to say to them?

A: Don’t be so hard on yourself, because we are our hardest critics. You have to find an outlet. One of my friends isn't athletic, but she's the best cook I’ve ever met. That’s something you can be proud of, because a lot of people can’t even fry an egg! So it’s all about finding what works for you and fitting into you. Don’t try to fit into social standards, just try to fit into yourself and find something that you enjoy doing, that you’re good at...and just thrive in it. Once you have one thing to be proud of, and you’re confident about, then life just gets easier.

What have you learned from this experience?

A: To keep my mouth shut! I need to have a filter! We don’t have any media training and I just start talking. I need to tone it back a bit. Maybe even be more confident with myself. I'm actually quite shy!