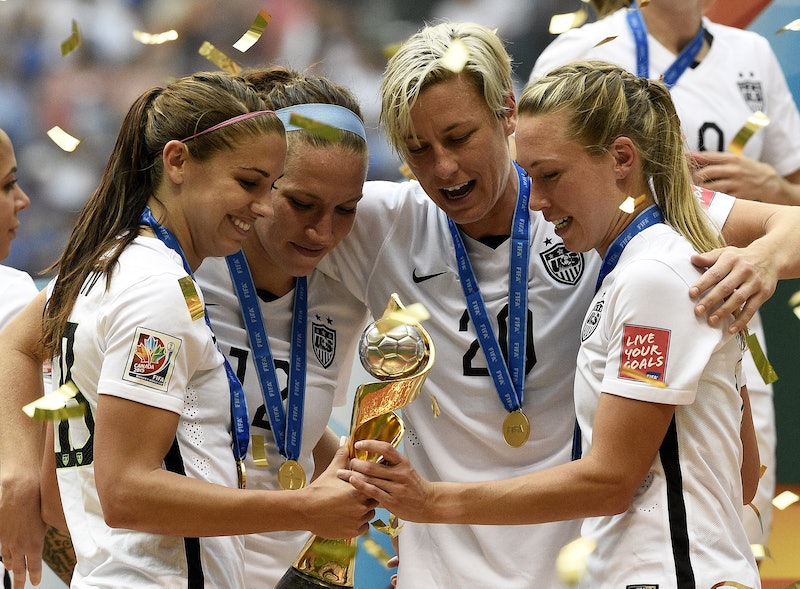 Thousands are present for the first-ever ticker tape parade for a World Cup champion women's soccer team in New York on Friday, and one women's rights group is taking the opportunity to spread its message of "Equal Pay for Equal Play." It was shocking for everybody to learn that the U.S. Women's Team took home $2 million in prize money for winning the World Cup — less than any of the men's teams in the 2014 contest. That's why one women's rights group, Ultraviolet, launched a national petition and Ultraviolet's anti-sexism ad campaign against FIFA was kicked off (pun intended) at New York's celebratory parade Friday.

In 2014, the men's World Cup champion Germany took home $35 million, and the U.S. men’s team took home $9 million, even though it lost in the round of 16. Even eliminated teams in the men's tournament were guaranteed a prize of $8 million. UltraViolet wants to shame FIFA into rectifying the imbalance.

It's high time FIFA was called out for its pervasive sexism. Outgoing FIFA president Sepp Blatter famously commented that one way to boost the popularity of women's soccer could be more "feminine" uniforms, the Guardian reported. "They could, for example, have tighter shorts," Blatter said. "Female players are pretty, if you excuse me for saying so, and they already have some different rules to men — such as playing with a lighter ball. That decision was taken to create a more female aesthetic, so why not do it in fashion?"

And even as recently as this week, the nonsense continued. In a FIFA player profile of star player Alex Morgan on FIFA.com, the opening paragraph wasn't about how she played in the tournament, but instead was all about her looks. "Alex Morgan is one of the most popular players in USA women’s football," the article begins. "A talented goal scorer with a style that is very easy on the eye and good looks to match, she is nothing short of a media phenomenon."

"Very easy on the eye" — would a sports writer say that about any world-class athlete? FIFA needs to fix major problems on a number of fronts, but the way it treats its female players should be at the top of the list. At Friday's parade honoring their heroics on the field, there will be plenty of visible reminders about the persistent pay gap off the field.