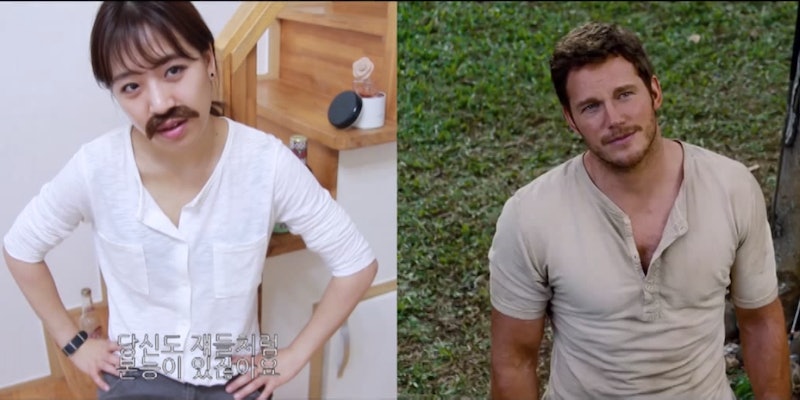 Don't yell at me: I haven't seen Jurassic World yet. I know, I know! Since I haven't had the chance to actually get out of my house to go see said film, I have watched the trailer, obsessively, since it came out. But now I've swapped that for this fan made Jurassic World trailer by Korean vlogger Hozza. Guys, it is transcendently funny, but also actually awesome. I still want to see Jurassic World, but now I would also like to see a shot-for-shot remake of Jurassic World starring this woman, playing every part, and using dinosaur action figures for the wide-shots.

Jurassic Park came out when I was 10 years old, which is basically prime Jurassic Park watching age. To this day, it's one of my favorite movies. I feel like it has aged super-well — the same cannot be said of some of the other top films of my childhood. (Don't worry, Willow , there will always be a place for you and shirtless, long-haired, 80s Val Kilmer in my heart.) So I will confess that part of why I haven't seen Jurassic World is fear that seeing it will somehow dull the shine of the original... that and the fact that I have two children, which makes movie theaters more or less off-limits until they're both about 5. (Film buffs, a word of warning: don't have children. You will literally miss everything.) Still, Hozza's trailer has me seriously pumped to risk my nostalgia and go. She nails every impression...

Sidebar: could literally (literally) not be more excited B.D. Wong came back for this movie.

And I am hyper-critical of raptor impressions, you guys, because my brother is basically the best at them. So if I'm saying she's awesome she is definitely awesome. I'm a harsh critic in the pretending-to-be-a-raptor arena.

I thought the hair clip jaw was a stroke of genius, and was happy to see that it makes a comeback later in the trailer for the mutant T-Rex

She even plays the dead apatosaurus

I think it was Orson Welles who said that the most challenging role an actor can take on is that of a dead dinosaur, and I think she pulls it off beautifully.