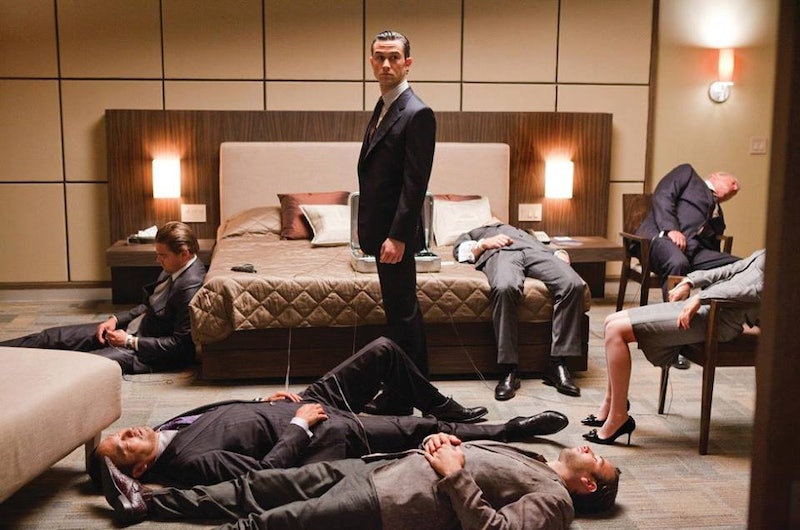 I love a good mind-bending movie as much as anyone else, but Christopher Nolan's Inception really takes the cake. In this world, dreams have layers upon layers upon layers, and sometimes it's tough to keep up. To celebrate the film's fifth anniversary, I decided to rewatch the movie and take you through what the stages of watching Inception are. You'll follow me through thinking I understand the movie's plot to wondering if I ever did and if even know anything about life at all. Thanks, Christopher Nolan.

After captivating audiences with Batman Begins, The Dark Knight, and The Prestige, Nolan completely blew all of our minds with Inception. The 2010 film stars Leonardo DiCaprio as Dom Cobb, an "extractor" who steals corporate secrets from a very complicated place — his target's subconscious. Inception — ahem, the film's title — refers to the practice of planting an idea in the subconscious via a dream. Along for the ride are fellow extractor Arthur (Joseph Gordon-Levitt), Eames (Tom Hardy), Ariadne (Ellen Page), Yusuf (Dileep Rao), and Professor Stephen Miles (Michael Caine) as they target the wealthy heir Robert Fischer (Cillian Murphy) for inception. But there's also the matter of Dom's dead wife Mal (Marion Cotillard) haunting him and the whole threat of "what if we get stuck in a dream" thing.

All right, I have the movie ready to go. Here are the nine stages of watching Inception.

Of course it was. Of course this movie would start in a dream.

It's 20 minutes into this movie and I'm already confused about reality. I feel like I need a map. Luckily, those exist to guide me in this viewing.

Here comes all the exposition about Dom and dreams — along with some really cool special effects. This is the part in the movie were Inception teaches the audience about dreams, dream architecture, totems, projections, limbo, the subconscious, and psychology. It's a lot to taking in, but I know it comes in handy later.

4. This Dead Wife Subplot Kinda Reminds Me Of Shutter Island

Earlier in 2010, DiCaprio starred in the mental hospital thriller in which that main character had a similar-ish subplot. I'm not saying they were the same, but when I had seen both movies in the same year, it was a little odd noticing that DiCaprio's characters seem to have very tragic wives.

As I reach the end of the first hour of the movie, the characters do a lot of crucial preparation for this huge operations. It's like Ocean's 11 x 10,000 + dreams. I'm trying to stay engaged, but it's all lot of information to take in. I'm looking forward to when it all pays off.

And they're off! The first dream has started and this movie is getting good.

7. SO MANY DREAMS! SO MUCH CONFUSION!

Where are they? What's going on? Where am I? Is this movie real? Who's in who's dream? How many dreams are going on now? So. Many. Questions.

They did it! Happiness abounds. I'm so happy to get back to reality.