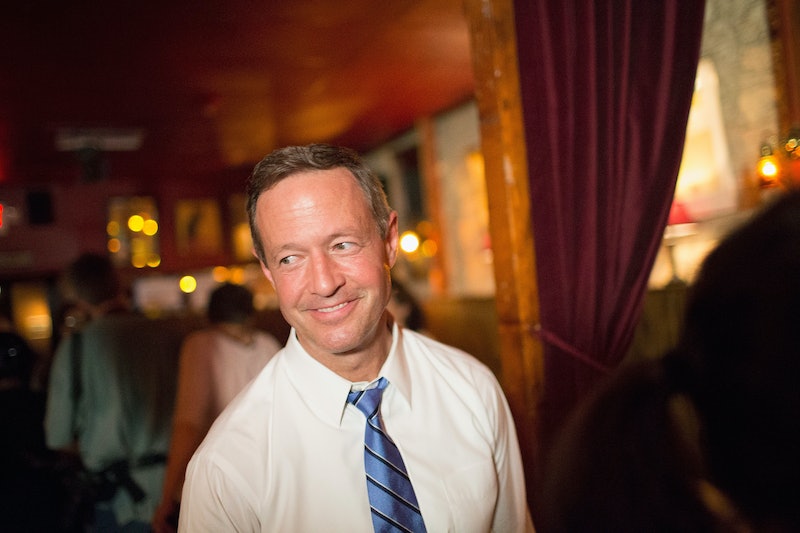 On Thursday morning, Bloomberg political correspondent Phil Mattingly tweeted a rather awkward discovery he made while perusing Democratic candidate Martin O'Malley's website. After reading a policy paper O'Malley had written that analyzes the perils of unregulated positions on Wall Street, Mattingly quickly skimmed the sources, and found that Martin O'Malley had mistakenly cited a satirical news website — and reported the made-up stats as facts. (Oops.) As for the article in question, it was titled, "Eric Holder Takes $77 Million Job With JPMorgan Chase," and published by The Daily Currant, which, if you're not familiar, is a news site that runs articles similar to that of The Onion. So yea... needless to say, it's definitely not an accredited news source.

In the wake of Thursday's discovery, O'Malley's spokesperson Lis Smith stepped forward to issue a public statement in defense of the blooper, saying, "Errant footnotes are just a small side effect of putting out the most comprehensive policy paper of any 2016’er on Wall Street." And to be fair, the faux pas (while pretty embarrassing), isn't exactly unforgivable. Even though information presented in The Daily Currant's article was obviously inaccurate, the piece did reflect the very real cynicism felt by many toward Wall Street's connection to the government. That, above all else, was precisely what O'Malley was trying to convey in his report.

And then there's this unavoidable truth: while a politician being fooled by satirical news site may not exactly happen every day — thankfully — it's certainly not the first time one's been duped. Here are a few other past examples that would probably make O'Malley and his super embarrassed campaign team feel a whole lot better.

In November 2010, Fox Nation confused a fake article by The Onion regarding a 75,000 word email from President Obama about midterm elections for the real thing. So convinced was the outlet, that it immediately ran an article responding to the email. The article was quickly removed, but not before Fox received a good deal of (well-deserved) mocking from the entire Internet. So to be fair to O'Malley, at least his report on Wall Street wasn't a direct response to a fake story.

Three years later, the ever-reliable Fox Nation once again slipped up on national TV when one of its morning show hosts referred to an article by The National Report, another popular satirical news source. Again, the fake article was about Obama, except this time it stated that the president planned on donating to the International Museum of Muslim Cultures out of his own pocket.

In February 2012, Republican Congressman John Fleming shared an article by The Onion titled, "Planned Parenthood Opens $8 Billion Abortionplex," adding a very grave, serious message: "More on Planned Parenthood, abortion by the wholesale." Also in 2012, the Mecklenberg County, VA Republican Party shared The Onion's story "Obama's 19-Year-Old Son Makes Rare Appearance At DNC" on their Facebook page. Beneath it, they added a seriously befuddled comment: "How come we've never heard of this one?" (I think I can give them a few guesses as to why.)

But U.S. news outlets aren't the only ones to be tripped up by fake news stories — especially thanks to The Onion. In September 2009, The Daily Manab, a Bangladeshi newspaper, reported that Neil Armstrong's moon landing had been "an elaborate hoax," after The Onion ran a satirical piece with the headline, "Conspiracy Theorist Convinces Neil Armstrong Moon Landing Was Faked." Oof.

In November 2012, after North Korea's Kim Jong-un was named The Onion's "Sexiest Man Alive" in an article, the communist party news source People's Daily, China, dedicated a 55-image slideshow to celebrating the dictator's undeniable sex appeal. The slideshow has since been removed, but its beginning was forever immortalized in a screenshot by The Onion.

Last but definitely not least, comes the controversy stirred up during the infamous 2011 Congress budget fight. That was when The Onion also (accidentally) caused trouble again after posting an article in which it jokingly portrayed the budget fight as a hostage situation. They even went so far as to say young children were being held by "armed" Congressmen, sending this alarming tweet out into the universe: "BREAKING: Witnesses reporting screams and gunfire heard inside Capitol building." Other similar warnings were also sent out in order to promote the story, which turned out to be a bit too real for U.S. Capitol Police — they immediately proceeded to actually investigate the situation before realizing it was a hoax.

See? If I were O'Malley, I wouldn't feel too bad knowing I wasn't alone here. Clearly, mistakes like his happen to the best of us, right? And, after all, satirical news sites can be pretty convincing — I mean, Kim Jong-un as Sexiest Man Alive? The Onion definitely got me there!