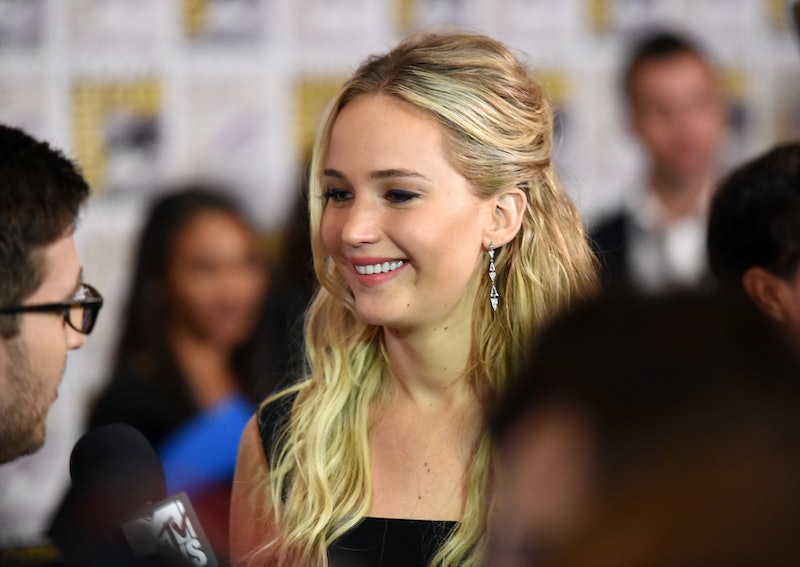 I've always had this sneaking suspicion that Jennifer Lawrence is the one celebrity you would want to take with you to karaoke, and her appearance on Conan Thursday night proved me right. During the interview, Lawrence sang "Believe" by Cher, with backing vocals from Josh Hutcherson, and it was like hearing an angel sing...in a silly, cartoonish voice, incredibly off-key, and laughing the entire time. The Hunger Games actress was bemused by the fact that her song, "The Hanging Tree," went to No. 1 on the charts, claiming that she could have blown a raspberry and said, "Durrr, Hunger Games," and that would have gone to No. 1 as well. However, after Hutcherson insisted that it was her talent that caused the song to go to No. 1, they sang Cher together, because their friendship is actually perfect.

No, seriously, if there are people out there who are managing to avoid 'shipping Everlark in the Hunger Games films, then how can you still refuse to cave under the heavy weight of J. Law and Hutcherson's real-life friendship? Despite the hilarity of the clip, it wasn't lost on me that Lawrence had just finished speaking about how scared she was to sing in front of other people when Hutcherson began singing "Believe" with her. Every time she opened her mouth to sing a new verse, he joined in so she wouldn't feel self-conscious, and that turned it into great fun for both of them. Liam Hemsworth, also present, looked like he sees this kind of thing a lot on set, which wouldn't really surprise me at all, to be honest.

This Conan clip will make it even harder for you to say goodbye to the Hunger Games after the release of Mockingjay — Part 2, because I just want these three to hang out with each other for the rest of time. I can't honestly say I'm surprised that, when Lawrence sings to herself, she chooses from Cher's considerable discography. Let's hope that, next time they decide to duet, she and Hutcherson do a rousing rendition of Sonny and Cher's "I Got You, Babe." At the Mockingjay wrap party, perhaps?