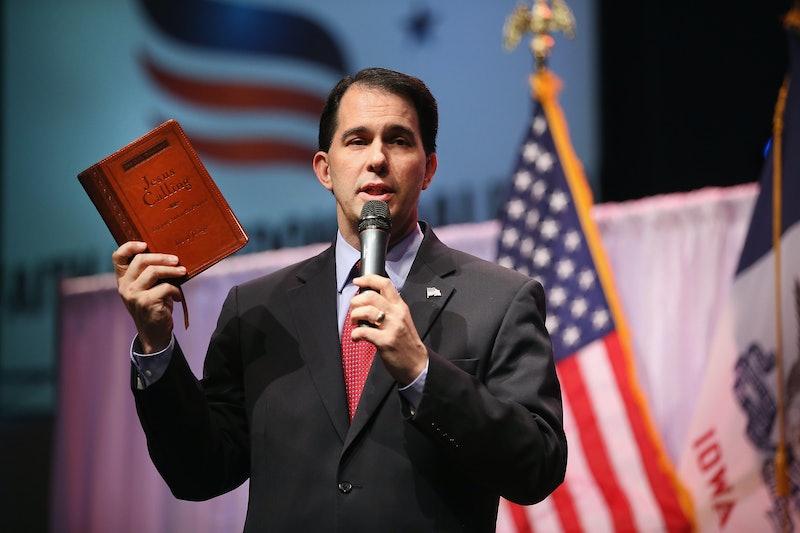 Scott Walker finally made his run for the presidency official on Monday. Everyone has been expecting this for quite some time as Walker's team geared up for this campaign over social media. In a Monmouth University poll of Republican candidates from this past weekend, Walker is behind frontrunners Jeb Bush with 15 percent, and Donald Trump with 13 percent (don't get me started). Walker is the 15th Republican candidate to join the race and is certainly one of the most conservative of an already very right-leaning Republican cohort. Among the more grim policies is Walker's stance on abortion, which would make for a scary situation were he to win the White House.

Currently serving as governor of Wisconsin, Walker has supported and passed myriad bills restricting abortion, and violating abortion seekers' right to privacy. Not only do these laws putting patients in potentially dangerous situations, they have made it difficult or impossible for some clinics to remain open.

Walker is soon expected to sign a new bill the State House approved on Thursday that would put a 20-week restriction on abortions. According to MSNBC, Walker personally requested this ban "include no exceptions for rape and incest." This is just the most recent of several abortion restrictions Walker has signed into Wisconsin law during this time as governor.

In 2013, Walker signed a bill that not only restricted access to abortion and also violated abortion seekers' right to privacy and ability to make their own medical decisions, it required all physicians performing abortions have admitting privileges at nearby hospitals and further required anyone seeking an abortion to have an ultrasound prior to the abortion procedure. According to the Guttmacher Institute, this restrictive abortion law also states "the provider must show and describe the [ultrasound] image" to the patient.

As if these impediments to safe and expedient abortions were not enough, under Walker's leadership, Wisconsin also passed a law that requires anyone seeking an abortion to "meet with a counselor and physician before [they] can have an abortion." They then must wait a full 24 hours before an abortion procedure will be permitted, and any minor seeking an abortion must have parental consent (and then get counseling, and an ultrasound, then wait another 24 hours...).

Walker's presidential announcement comes right on the tail of state legislators passing a 20-week abortion ban, and he could make his anti-abortion agenda a significant part of his presidential campaign. So far, abortion has not been a major issue that candidates are talking about, and time will tell if this shifts with Walker's official introduction to the race. Walker is apparently thoroughly committed to a strictly pro-life agenda, and as the Republican debates near, we will see how much of an issue he plans to make of it.