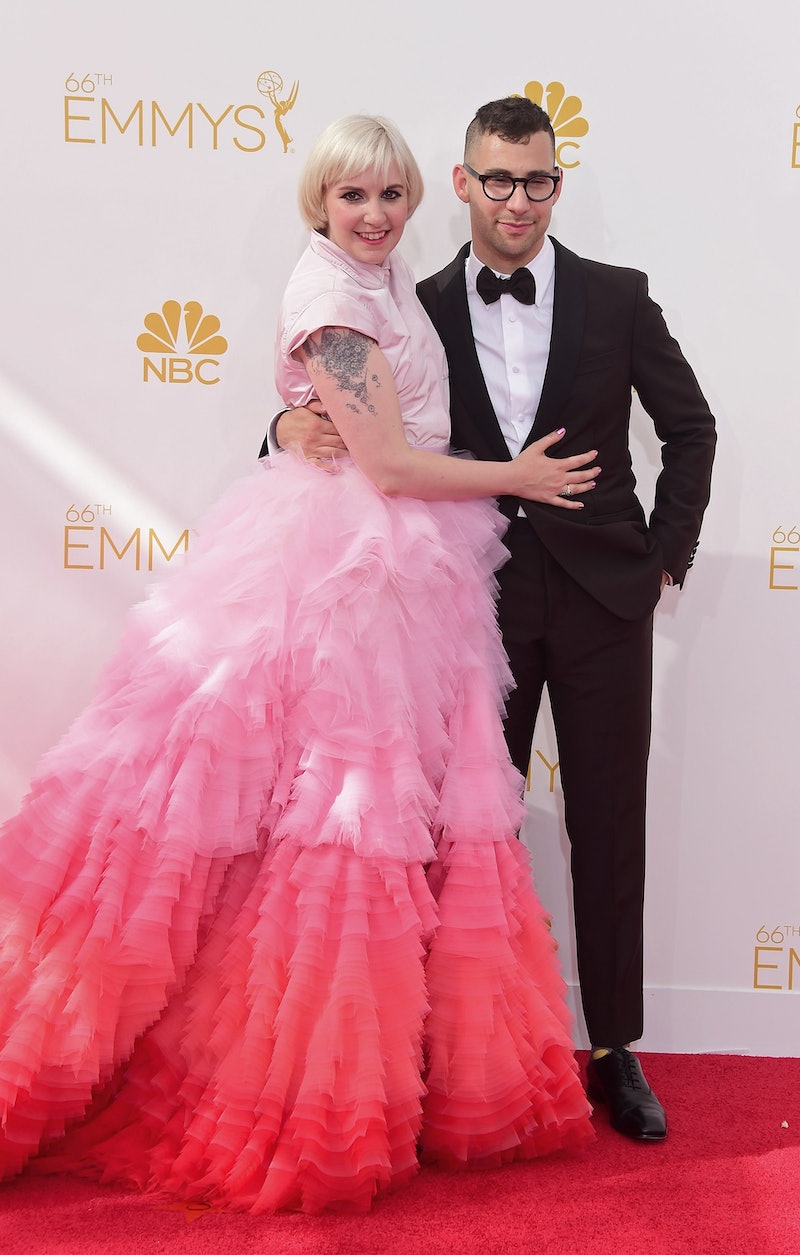 On Friday, as I was doing my usual zombie-like morning Instagram scroll, I came upon a post that struck a particular chord. As an introduction to her New Yorker piece on marriage, Lena Dunham uploaded a sweetly drawn picture of herself in a wedding dress on a piece of crinkled loose leaf. On the surface, the picture is unassuming. Nostalgic, really. I laughed to myself because I, too, had drawn so many pictures just like that one. Well, maybe without the combat boots.

The title of Dunhams' New Yorker piece is "The Bride in Her Head," and suddenly, the pen sketch of Dunham's quirky wedding dress and accompanying party details made a whole lot more sense. The story is half about her marriage equality pact with boyfriend, Jack Antonoff, and half about her own lifelong conflicting stance on marriage. She details how now that marriage equality is legal, surprisingly, it didn't mean imminent nuptials for them, despite that cheeky tweet and subsequent questions from friends, fans, and family alike. What it did, instead, was force her to reflect upon her own relationship. And, mainly, how despite her mother's seeming indifference to marriage as a whole, she had spent a larger part of her adolescence hemming and hawing over the planning of her own.

Like Dunham, I could never quite reconcile my feelings on marriage, either, in spite of the amount of times I may have been caught playing "MASH" growing up. Confusingly, though, I had also mused over the "fluffy dress," rearranged my bridesmaid selection according to each and every friend gain and loss, and I was so very sure that Justin Timberlake would be my husband. Obviously, Jessica Biel had other plans. But, the thing is, even if I still had the option to marry that curly haired hunk today, I don't know if I'd want to. As if the Girls star peered directly into to my brain, she explained that conundrum like this:

Marriage, for Dunham and girls like us, had not been about marriage. It had been about the wedding. "A wedding was, I imagined, an incredible day, better than your birthday, Halloween, and Hanukkah combined, with all eyes on you — a chance to be the star of your own show," she writers. A decidedly bleak and selfish point of view, considering that a wedding is supposed to be about two people recognizing each other. Not one person getting recognition from a bunch of people, some of whom don't really matter in the grand scheme of things. The wedding being more important than the marriage idea has to be troubling for someone like Dunham who once held that childish belief.

With the marriage equality ruling out of the way, Dunham addresses the very real anxiety she, and she assumes others, have of no longer being held back by their “principles” and the strange, contradictory feeling of being imprisoned by that freedom:

I must admit that I wondered what might happen to me now in the marriage department. What would happen to any of the many straight girls with this particular set of principles in play? We were exposed, vulnerable to marriage’s strange power once more.

Admittedly, I did not have a selfless marriage solidarity pact as Dunham and Antonoff did. I broke up with my longtime boyfriend over a year ago and even when we were still stringing each other along, I was a 22-year-old recent college graduate, and marriage was not even a word in my vocabulary. But, regardless of social statements or relationship statuses, there is an undeniable fact: As a woman, the older you get the more the marriage pressure is put upon you. And, for someone like Dunham or myself, the fear of disappointment and feeling of not doing something that is "expected" of us still lingers.

The actress says this: "It’s nearly impossible to detangle personal preference from social conditioning, our deepest desires from the codes we have been taught to follow. I am not foolish enough to think I have made a final decision about marriage." And, I salute her for that. She better articulated my own feelings than I could have dreamed to.

I didn't and still don't have an ultra-progressive family like Dunham's. My mother was not an '80s feminist. She got married in a lavish ceremony at 22 and had me only a year and a half later. And that worked for her because that was what she wanted. Though we just celebrated my parents' 26th wedding anniversary this past June, and despite having a "model couple" to look to for what marriage is, I still don't know if that is what I want. And, you may not either. But, at least we aren't alone. At least we're talking about it. An maybe people who aren't like us, will start to understand.