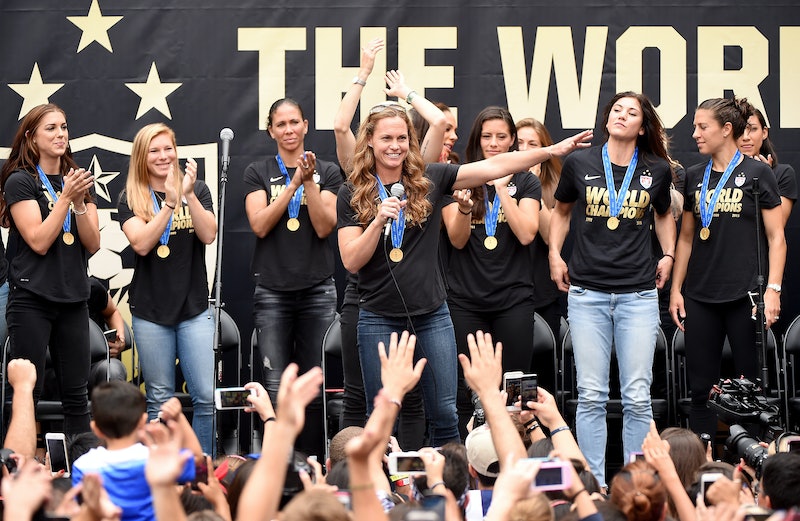 On Friday morning, the U.S. women's soccer team were the undeniable stars of a well-deserved parade through the streets of New York City, with thousands gathering along a stretch of Lower Manhattan to catch a glimpse of the winning athletes. The parade, which celebrated Team USA's World Cup victory over Japan last Sunday, brought together eager fans from all over the country, who came to wave, scream, and cheer on the fearless women of Team USA as they rode down the Canyon of Heroes like true champions.

Naturally, it wasn't long before social media was absolutely flooded with images of the crowd and the Women of the Hour, who waved and looked down from a float reading "She Believes" and "Thank You Fans!" Just like last week's epic win, the parade itself was pretty historic: it was the first time an all-female team has ever had a ticker tape parade held in their honor in NYC. So needless to say, it wasn't just a huge day for women's sports — it was a huge day for gender equality, too. Considering how rare it is to see female athletes getting as much recognition as their male counterparts, it's been amazingly inspiring to see so many people totally psyched for Team USA — and women athletes in general — and not holding back their excitement one bit.

Scrolling through photos of the many faces in the crowd this morning, I just couldn't help but think of the significance of it all. Some fans donned painted faces with stars and stripes; others held "Go USA!" posters; and others waved American flags proudly beside gay pride flags. And while I'm amazed and proud of what the USWNT's win means for the young girls, it was just as touching to see how many men and boys showed up Friday to cheer them on, too.

The photos that have since flooded the Internet have all been brimming with emotion, but there's one in particular that couldn't help but stand out to me; and that's probably because it so perfectly captures just how inspiring the women of Team USA have been for everyone — from girls and boys to grown men and women:

As they looked down from their parade float this morning at the massive crowd that came to celebrate them, I don't doubt that Team USA's winners took note of all of these young, individual faces in the crowd, and had the very same thoughts. I hope they felt as much pride as they should about just how inspired they've left us all.

And on that note, let me throw in one more congrats to the U.S. women's soccer team — and a straight-up first pump to gender equality.