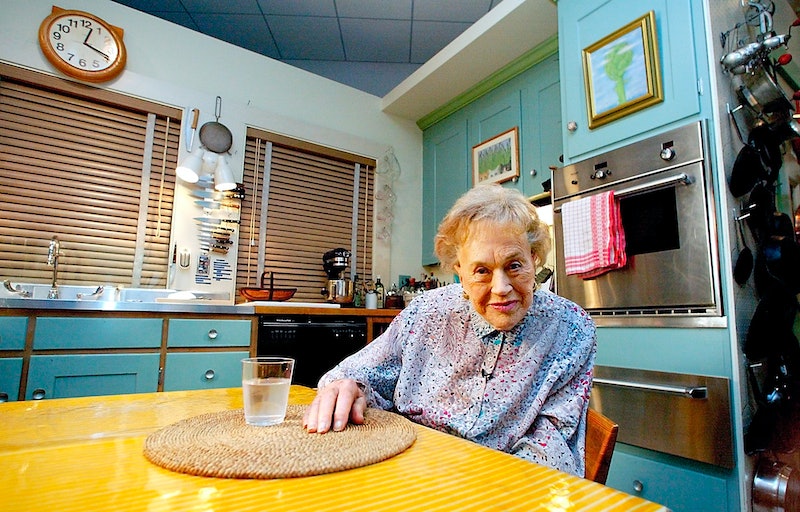 Shark Week is ramping up for its big climax this Sunday night after kicking off Sunday, July 5. The seven day celebration of all things shark may have hit its high point earlier in the week, shockingly thanks to the government. The CIA shared Julia Child's shark repellant recipe on social media Thursday and it just might be the best thing about Shark Week. It's a little known fact that before Child rose to acclaim in the kitchen, she was cooking up top secret projects with the Office of Strategic Services, the CIA's predecessor, during World War II.

Child initially worked as a research assistant in the early 1940s, then transferred to the OSS Emergency Sea Rescue Equipment Section. It is there that she helped develop the repellant for the Navy. Dubbed "Shark Chaser," the recipe that was ultimately used after years of trial and error was composed primarily of copper acetate and black dye that were shaped into small disks and typically held in small boxes with wire mesh meant to easily disperse it. The OSS reported an over 60 percent success rate in field tests with smaller sharks and estimated that the repellant was effective for up to seven hours, though they cautioned that Shark Chaser did not protect against other carnivorous fish.

The recipe may very well have been Child's first, though she was by no means a professional chef during that time and even considered herself a "disaster in the kitchen," according to the CIA. Nonetheless, she cherished her time with the OSS and even met her husband, Paul Child, while working there. She was interviewed by colleague Betty McIntosh for the book Sisterhood of Spies and marveled at the continued use of Shark Chaser, which was reportedly used well into the 1970s. Said Child:

I must say we had lots of fun. We designed rescue kits and other agent paraphernalia. I understand the shark repellent we developed is being used today for downed space equipment—strapped around it so the sharks won’t attack when it lands in the ocean.

Following its development, the Army and the Coast Guard eventually requested the repellant. Both branches of the armed forces had taken an interest in such a preventative tactic after hearing reports of soldiers falling victim to shark attacks. According to the CIA, at least 20 such cases had been reported throughout the war. Army and Coast Guard officials swiftly wrote into the OSS requesting Shark Chaser, stating that it would enhance overall morale despite the rarity of attacks. To further quell anxieties, the Naval Aviation Training Division issued an official field guide, complete with cartoons. The "Shark Sense" guide was introduced in 1944, just one year after Shark Chaser became available.