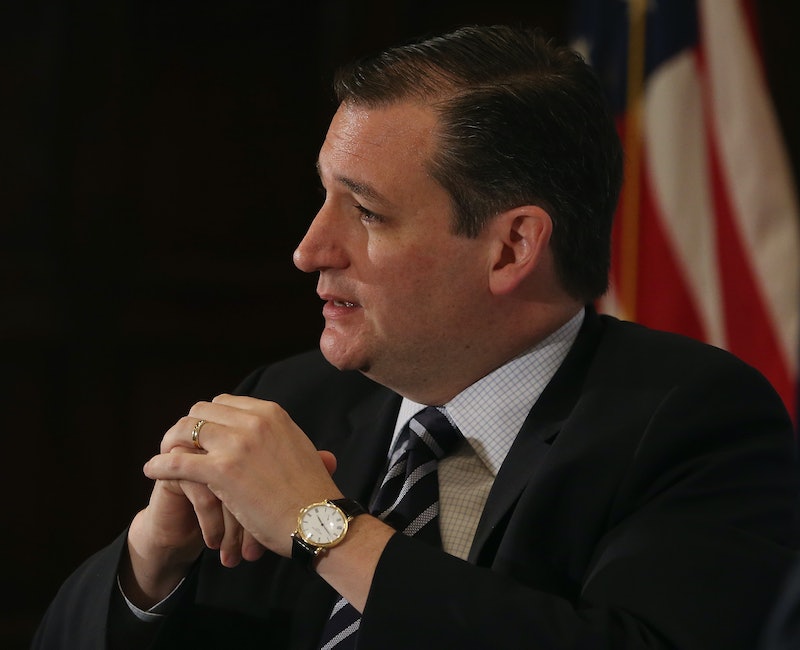 Ted Cruz's biography sold 11,854 copies in its first week, but the New York Times won't be including A Time For Truth on its bestseller list. You'd think that selling a lot of copies of a book would be the way to get on the list (Cruz's biography sold more than almost all the bestsellers currently on the list), but that's not the case: Times spokesperson Eileen Murphy explained that there are "uniform standards" applied to the bestseller list, which include "an analysis of book sales that goes beyond simply the number of books sold ... this book didn't meet that standard this week."

So... what are the standards, exactly? Well, the Times keeps the exact guidelines hush-hush to try and prevent authors and publishers from buying their way to the top. In this case, Murphy explained the specific standard Cruz's book failed to meet: According to a follow-up email send to Politico's On Media blog, the sales of A Time For Truth were reportedly "limited to strategic bulk purchases."

A lot of people aren't buying that statement, though, no matter what their book purchase history. Many conservative bloggers accused the Times of deliberately leaving Cruz off the list because of his political views. And this isn't the first time the paper has been accused of manipulating the list to exclude conservative-leaning books. Jesus On Trial by conservative author David Limbaugh, and America: Imagine a World Without Her by conservative author Dinesh D'Souza, were both left off the list at some point in their publication, despite selling more copies than many other books on the list at the time.

UPDATE: In a statement to Buzzfeed News Friday, HarperCollins publicity director Tina Andreadis said the publishing house investigated the Times' claim that the book's sales numbers were the result of bulk purchases. HarperCollins "has found no evidence of bulk orders" of Cruz' book, the statement reads. Andreadis added:

A TIME FOR TRUTH ranked high on other publishing industry bestseller lists including Nielsen Bookscan (#4), a subscription service that tracks the vast majority of book sales in America, The Wall Street Journal (#4) and Barnes and Noble (#7). All these outlets omit bulk orders books from their rankings.

On the Media reported that the Murphy is standing by her claim that Cruz' numbers resulted from bulk orders. We'll see if the book somehow makes it way onto the Times' list in the weeks to come.