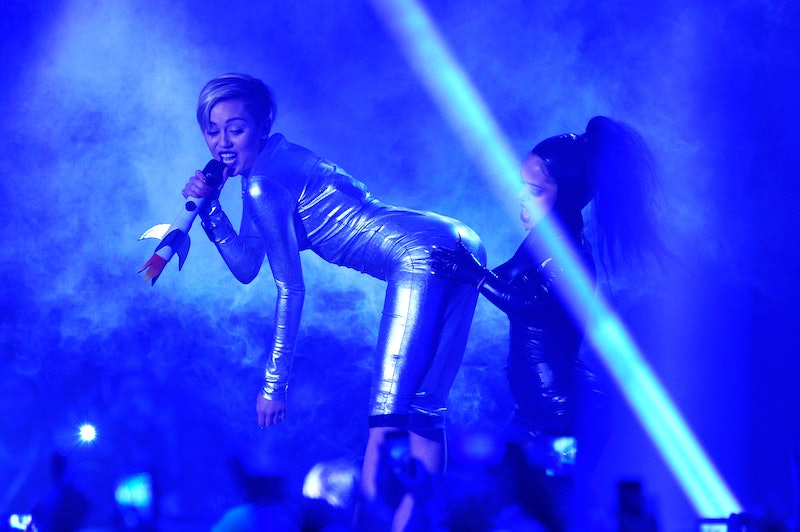 We all knew it would happen; we just didn't know when it would happen. Pornhub's Twerking Butt sex toy was just released, and it's... Well, it's a lot. In today's twerk-centric culture, it should come as no surprise that someone finally bit the proverbial bullet and created a sex toy capitalizing on the current obsession with twerking (as Ubreakable Kimmy Schmidt put it: "Dancing is about butts now!"). I'm just surprised by how high-tech it is.

The Twerking Butt features "cyberskin" technology, so the butt heats up to a normal body temperature of about 96.8 degrees. The standard version costs $500, comes with "reality goggles" for a more complete experience, and comes with both a vibrating and massage option. You can purchase the the Butt in either the "classic" or the "deluxe" form here. The "deluxe" version is $799 dollars, and on further examination, it turns out that the only difference between the classic and deluxe its that the deluxe one twerks. So you can have all the vibrating, massaging joy for $500, but you're going to have to shell out more for the twerking (although I would argue that a twerking butt that doesn't actually twerk totally defeats the purpose).

Oh, and there's also this: Most excitingly, the butt can twerk along with your playlist. So even if you're not interested in using it as a sex toy, it might be your newest favorite dance partner.

Check out this video to see what the Twerking Butt can really do, and then read on for more insane sex toys that actually, improbably, exist.

So, like, when a normal human penis just isn't cutting it, you can use this silicone model of an orca penis. Because that's the logical next step.

Y'know just your average sex toy with a camera built in.

This "razor sensation tool" comes with a spiked pinwheel and claw and looks very scary and dangerous to me. But hey, if it does it for you, then that's awesome. You do you.