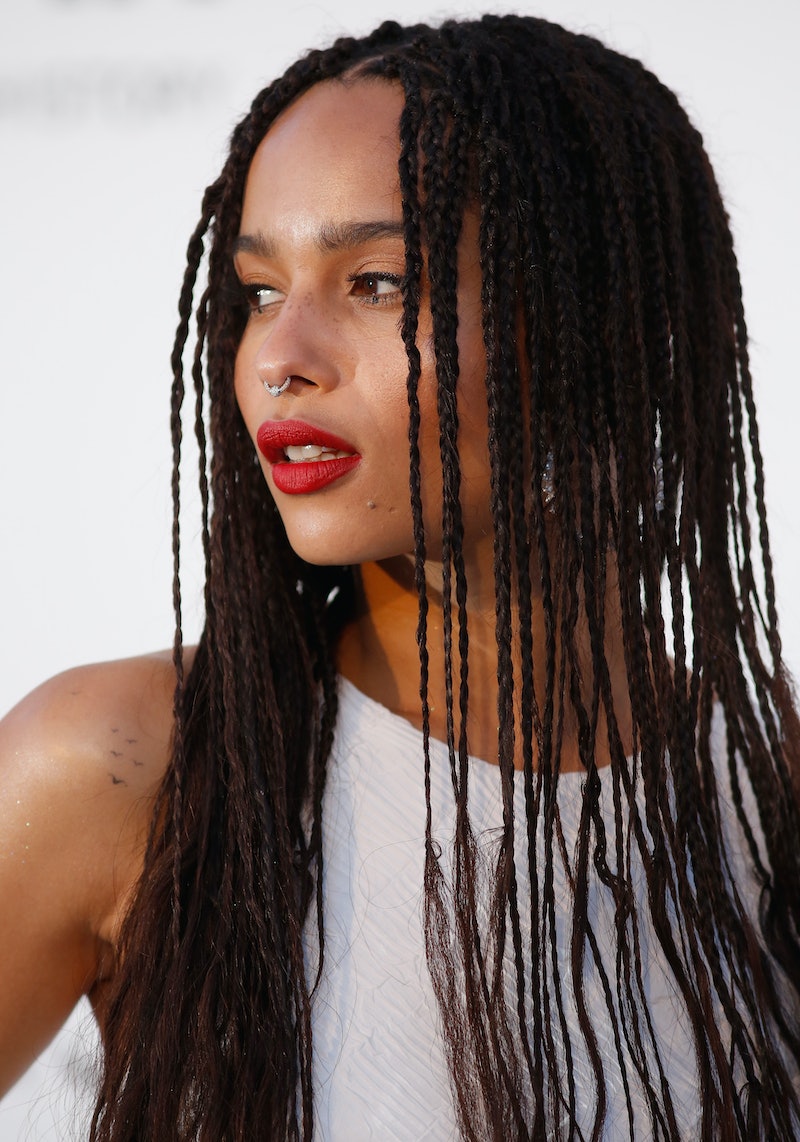 There are few things in this world more perfect than the geometric black eyeliner on Zoe Kravitz's August cover of Nylon . Seriously, was it applied with a protractor? Kravitz and her eyeliner grace the cover of the mag, along with the title "Zoe Kravitz Is The Coolest Girl On The Planet", and frankly, I could not agree more.

From her countless fashion shoots to the girl-power movie roles she takes on to her addictive music videos with the group LOLAWOLF, the artist/actress exudes her own covetable brand of cool.

With her raised chin, clear eyes and open-shouldered pose on the cover, she positively exudes confidence, but feeling at home in her skin hasn't always come easy for the star; Kravitz confides that growing up, she struggled with eating disorders and self esteem issues.

Now, though, it seems that confidence is no issue. For her interview with Nylon writer Jessica Herndon, it was Kravitz who suggested the two head to Olympic Spa in Koreatown for full-body milk scrubs — completely naked, and after a big BBQ lunch.

In the article, Kravitz proves that she's wise beyond her 26 years; She dissects what it means to be black in America, shares her experiences growing up with not one but two famous parents, and talks about being selective about which roles she chooses. She's firm about not getting typecast as into roles typically reserved for young, black actresses. "I don’t want to play everyone’s best friend. I don’t want to play the role of a girl struggling in the ghetto," she tells Nylon.

It seems her determination to play powerful, independent women has paid off — she nabbed a role in this summer's Mad Max, and several years ago, had a role in The Brave One with Jodie Foster rewritten for her. (It was originally written for a Russian teen.)

On the cover, she rocks a wide straw hat over her trademark long braids, and tops a bikini with a plaid/denim one-two punch — a veritable nineties classic for this '90s chick. Inside the spread, more vintage denim-forward looks ensure, including that bikini top from the cover which, as it turns out, is actually kind of see-through (say it with me: Con-fi-dence!)

Has a Canadian tuxedo ever looks so effortlessly kewl?

Mom jeans and a mom belt and what is arguably a mom sweater and she still looks hipper-than-thou posed next to a vintage 7-Up machine.

No dirt on this cool-girl's shoulder, that's for sure. Check out the entire profile when Nylon's August issue hits newsstands!