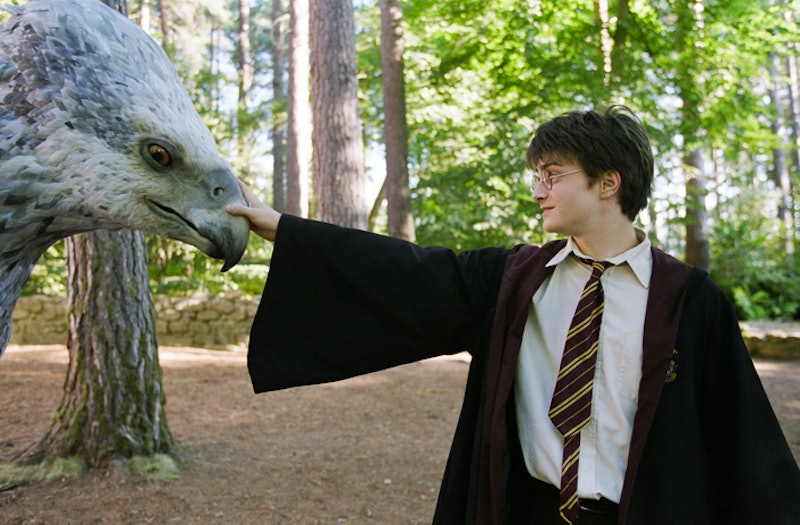 My childhood is upset. Daniel Radcliffe, why must you hurt us so? Ugh, fine, we can't stay mad at you for long. But still, folks, the fact is real: Daniel Radcliffe thought about leaving Harry Potter after Prisoner of Azkaban. But he didn't! That's the important part! He didn't!

Here's what he said in a recent interview with The Guardian:

By the third film, I thought, if there’s a time to get out, it’s now; there’s still enough time for another actor to come in and establish himself. For a while I thought, if I do all of them, will I be able to move on to other stuff or should I start doing other stuff now?

The thought of another actor coming in mid-franchise — without the necessity of it through death, as with the tragic death of Richard Harris and the casting of Michael Gambon as Dumbledore — seems almost inconceivable. What he says does make sense, though: If he were going to leave at any time, that would have been it.

The guy was also only around 14 at the time, and if there's any time to start feeling chafed by your surroundings — whether that be a big-budget movie set or your bedroom back home — it's right about then.

Radcliffe also didn't likely have those doubts about his future in the series because of any qualm with Prisoner of Azkaban itself — he reflected on the merits of that film in a past interview with The Huffington Post:

It was very different. But it was also like, I think it's the best decision that was ever made for the series. Because it just changed how people saw us and it changed the perception of what we were trying to do.

We obviously know which choice Radcliffe ended up making, and now that he is living a post-Potter life he says that he has no grand scheme (or desire) anymore to distance himself from its legacy — although plenty of actors who've played iconic characters have tried to do so in the past.

I know that Potter is going to be with me for the rest of my life, so to try to set a goal where nobody talks about that any more is stupid. It would be like… Paul McCartney might have gone on to do a lot of other things, but people are always going to want to talk about the Beatles. It's just a fact of your life, so you can't get annoyed by it or resent it. You have to embrace the fact that you were involved in this incredibly cool thing that did wonders for the British film industry and though you might not always be happy with the work you did on it, the opportunity it has given you to forge a career for yourself is amazing.

We gotta hand it to him, so far it seems he's doing a pretty good job.

More like this
Daniel Radcliffe Is Shirtless In The New Trailer For His Weird Al Yankovic Biopic
By Jack Irvin
10 Eurovision Moments That Celebrate The Weird & Wonderful Camp Extravaganza
By Sam Ramsden
Elizabeth Olsen's Chris Evans Friendship Update Was Accidentally Hilarious
By Grace Wehniainen
Wait, Did Wanda Die In 'Doctor Strange And The Multiverse Of Madness'?
By Arya Roshanian
Get Even More From Bustle — Sign Up For The Newsletter