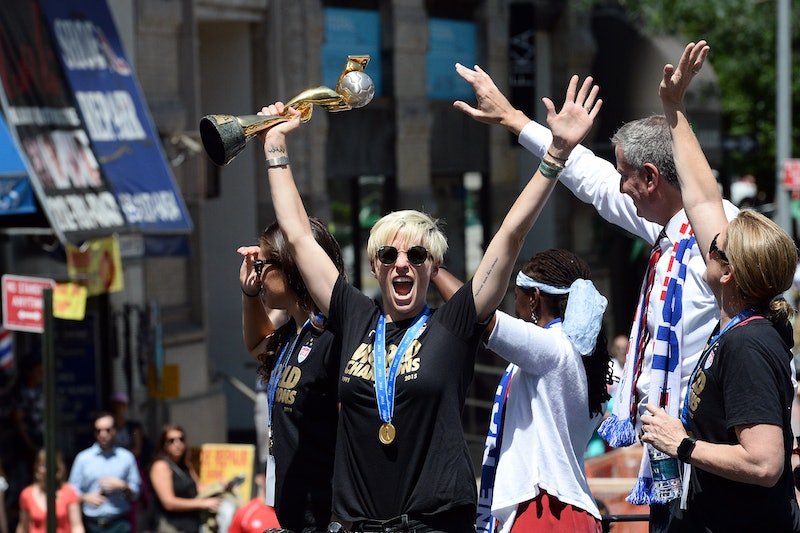 Man, did that parade look fun. On Friday, after their decisive victory in the 2015 Women's World Cup final, the United States Women's National Team took to Lower Manhattan for a celebration for the ages. They made the same, iconic trek that so many athletes and American heroes have done before, rolling through the so-called Canyon of Heroes to celebrate their dominant tournament run. But it's a sight that New Yorkers are fairly familiar with, raising the possibility for a little comparison — how did the USNWT parade compare to New York City's last one?

Assuming you yourself aren't a New York sports fan, you probably aren't sure when the city last hosted a victory parade like this. But it happened reasonably recently, just back in 2012, following a Super Bowl victory by the New York Giants. Obviously, a Super Bowl parade is a slightly more provincial affair than one for an international tournament — the whole country is full of Americans, after all, while a statistically tiny number of us are Giants fans.

But the NFL has a towering reputation as the American sport, as well, and you won't find much more boisterous stadiums stateside than at NFL games. So, who came away with the cooler parade? Were there any noticeable differences?

Considering how hard it is to win a championship for a mere city, the feeling of winning a title for a whole country must be staggering. International success isn't viewed the same way in every sport, especially the ones for which America's leagues are the strongest — nobody really cares about the World Baseball Classic, for example — but soccer is the game that the U.S. so often leaves behind.

As such, there's a real feeling is triumph in this moment, with fans of the game and fans of this specific team alike uniting in a joyful catharsis. And you can see it sitting right on the surface — just look at some of these images.

This Women's World Cup title is historic for multiple reasons. First, obviously, they're the champs! They avenged their 2011 defeat at the hands of Japan, and Carli Lloyd is now an American sports hero for the ages. Furthermore, this marks the USWNT's third title in the seven times the tournament has been held. They won the inaugural Women's World Cup in 1991 over Norway, and won again in 1999 against China, a dramatic victory that ended with an iconic sports image.

In simple terms, the United States boasts the most accomplished women's team in the game's history. They're also lightyears ahead of the American men, who've never once won the World Cup. Step it up, guys.

To clarify, the parade took place in early 2012, but the Giants were the Super Bowl winners for the 2011 season. Their parade was undeniably a bombastic affair, and it actually fits in nicely against the 2015 USWNT parade thanks to the team's colors — Giants fans clad in red, white, and blue end up looking every bit as patriotism-obsessed as the fans of the American national team.

The Giants prevailed in Super Bowl XLVI, defeating the New England Patriots to secure their second title of the decade. Since 1990, they're won three NFL championships — right on pace with the three World Cups won by the USWNT starting in 1991.

Yeah, sorry Giants fans, gotta go with the women on this one. For starters, winning a World Cup is simply a bigger, rarer achievement than an NFL championship. It reps the entire country, in a sport that's loved across the world, and you only have the chance once every four years, while the Super Bowl happens annually. As such, three World Cups in a 25-year span is far more impressive than winning three Super Bowls.

Also, the USWNT gets extra points for being the clear, decisively best women's team in the world, while the 2011 New York Giants had a relatively mediocre 9-7 regular season that heated up at the right time — a middling Super Bowl winner in the grand scheme of things. Simply put, the USWNT victory appeals to more people throughout the country, to say nothing of the countless young women and girls who've been introduced to the grandeur of the world's game. Thanks for a hell of a parade, guys.