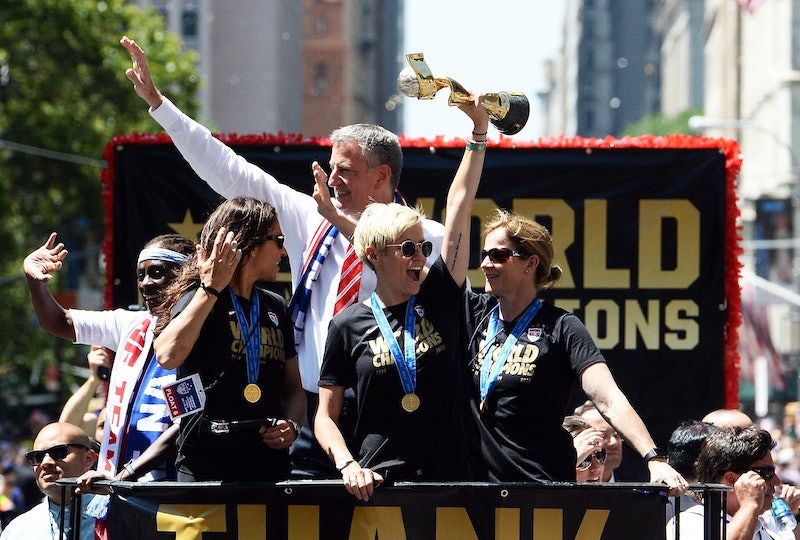 It's been an eventful Friday morning for New York City mayor Bill de Blasio: He's ridden a float with the latest Women's World Cup champions, taken a selfie with the Cup itself, said champions, and wife Chirlane; and waved at crowds of adoring fans. Lunchtime Friday, de Blasio delivered a powerful speech on gender equality in honor of the women's soccer team that beat out the rest of the world to claim the Cup; the speech preceded an official victory ceremony for the winners. "Today, once again they have made history," de Blasio said during his speech. "The first women sports team in history to be honored with a parade down the canyon of heroes. And let me tell you — it's about time, isn't' it?"

"You can see out there," he continued. "The love... You can see it in the faces of men and women, boys and girls.... Our hearts are with this team."He added: "And when they brought home that trophy, they also brought back a message about the power of women. About the strength of women, and about the need to create a more equal society for all.... Young women who watched that game will grow up and tell their daughters and they'll tell their sons about that 2015 champ team that made history, that opened minds, and brought us together. This is really what it means to be one nation, one team."

De Blasio is an ardent supporter of gender equality, and in late June set up New York's Commission of Gender Equality with wife Chirlane. The commission will, according to its press release, aim to "secure economic security, social inclusion and safety" for women and girls in New York.

Earlier Friday, Bill de Blasio spoke to WFAN about his feelings going into the parade. "I think this is a moment where the eyes of the nation — the eyes of the world — are on this team and what they represent," he said. "It certainly says to young women and girls that they can do anything.”

More like this
What Is Jeanie Buss' Net Worth? The Lakers President Is Uber Rich
By Hugh McIntyre
Jake Daniels Just Became The UK’s First Active Football Player To Come Out As Gay Since 1990
By Sam Ramsden
23 Abortion Funds In States With Trigger Bans To Donate To
By Emma Carey
Sandra Bullock, Girlboss Extraordinaire
By Matt Harkins & Viviana Olen
Get Even More From Bustle — Sign Up For The Newsletter