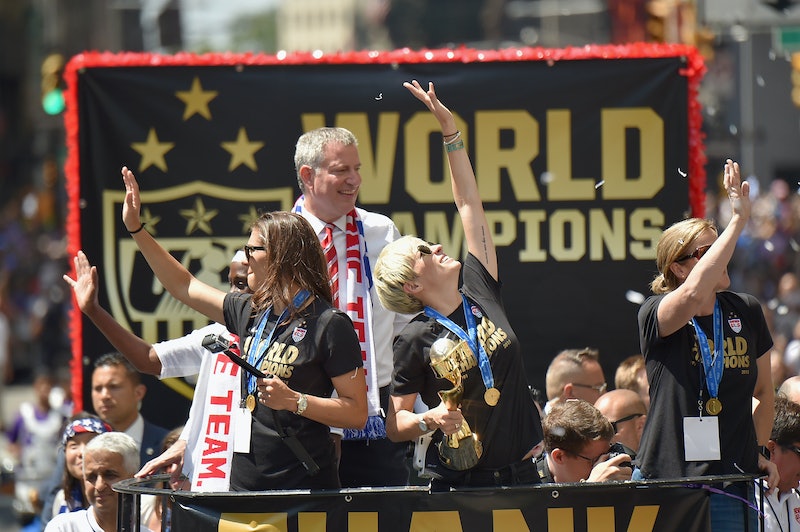 In the midst all the love and empowerment going on with Friday's New York City parade for the U.S. Women’s National Team, there's one phrase thrown around that, though used with entirely good intentions, doesn't really capture the spirit of the accomplishments this team has made: "Girl power." These words have graced signs, chants, and tweets, but there's a problem with the them. These women have withstood grueling practices, fierce competition, and agonizing injuries. The U.S. Women's National Team is made up of strong women, not girls.

The phrase "girl power" is something I associate with t-shirts aimed at teenagers or step-mothers who use it as a reason for why you should like them. It does not capture the essence of the players who fought like hell to be called "World Champions." It is not how we should describe the tough, resilient, tenacious team that, according to The New York Times, made 25 million people — even those who said they weren't worth watching — pay attention, because they were just too good to ignore. It does not describe the 23 amazing women who said no to heckling, discrimination, rule-bending, and the easy way out.

The women's soccer team is made up of adult, independent women, and they deserve a better hashtag than #girlpower (try, instead, #SheBelieves or #OneNationOneTeam). They're not "girls." They're fully-grown women. Here are eight things that prove it:

Their Training Is Insane

Star player Abby Wambach said in an interview with Fit Bottomed Girls that she trains for three hours per day, whether in the gym or on the field. She does everything from squats to running to dumbbell curls, and that's just her own personal routine. The team's training sessions provide harsh conditioning that prepares them for matches, where the players burn 1,000 to 1,500 calories.

These ladies can take more pain than most people imagine. Just before the World Cup, many players had injury problems. Forward Alex Morgan missed FIFA matches with Mexico and Ireland due to a knee injury, according to Fox Sports. Defender Ali Krieger was carried off the field in April after receiving a head injury, according to The Washington Post. Captain Christie Rampone also suffered a head injury in April, USA Today reports. The player take concussions, ACL tears, and countless cuts and bruises but always want to come back for more.

They Have Technical Tests

The players have to take technical tests. They get one attempt to master head juggling, instep juggling, passing and receiving, power shooting, figure-eight juggling, and driven long balls.

Most of the team played in the 2012 London Olympics and became Olympic Gold Medalists. They all have long resumes, boasting medals, tournament wins, and now a FIFA World Cup victory. That seriously deserves some respect.

They Have The Toughest Coaches

The coaching staff of the USWNT are unrelenting. Manager Jill Ellis expects a lot from these athletes, and some of the players have trained under legends such as Pia Sundhage and Mia Hamm.

Some Of Them Are Moms

Amy Rodriguez, Christie Rampone, and Shannon Boxx are all mothers, according to The Atlantic. This off-field job requires a serious adult, not a girl.

They Never Have To Stop Proving Themselves

There is always another FIFA tournament or Olympics in wait, and these women have to keep trying out to get to see worldwide competition. Their careers are never completely foreseeable.

No, these are not the little girls who consume orange slices and juice boxes at your neighborhood park. The youngest player, Morgan Brian, is 22, definitely old enough to avoid the "girl" classification. The oldest player, Rampone, is 40. Isn't it time we retire the "girl power" catchphrase when talking about these warriors?

More like this
Yomi Adegoke On The Offline Diaries & The Power Of Representation
By Jessica Morgan
Tapping Mind/Body Power: Evia Brings Digital Hypnotherapy To Menopause
By Cassandra Seale
Halsey Reveals Why They’ve Been “Really, Really, Really Sick” Recently
By Grace Wehniainen
The 'Selling Sunset' Cast Isn't Buying Christine's Excuse For Ditching The Reunion
By Brad Witter
Get Even More From Bustle — Sign Up For The Newsletter