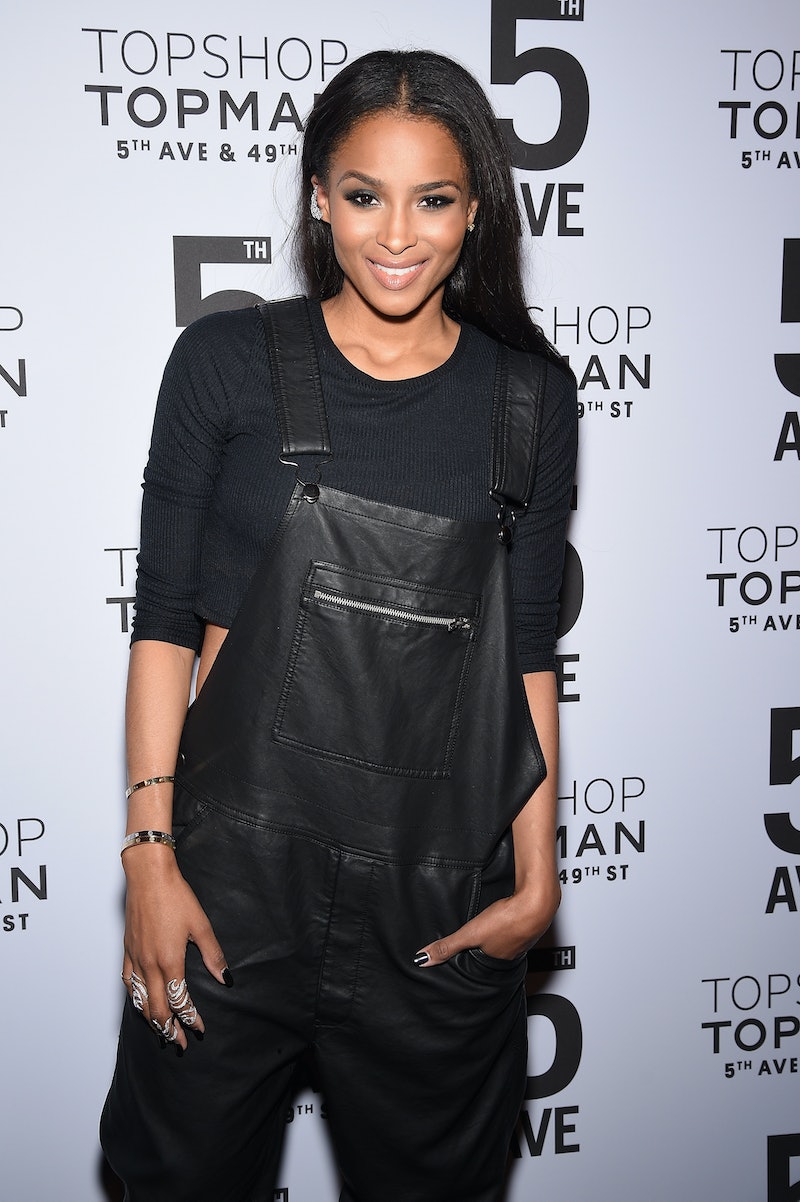 Topshop took a look into its five decades of archives earlier this week, but on Wednesday, the brand was all about the future, which thanks to its recently announced U.S. Brand Ambassador Ciara, looks incredibly bright. The partnership was announced in London (Topshop's home turf) at the Fashion Retail Academy’s 10th Anniversary Awards, where Ciara was also on the clock to present the Outstanding Alumni Award to buyer Thom Schedel.

Naturally, Ciara was wearing (what else?) Topshop to the ceremony as she presented the award and later, for a congratulatory selfie with the brand's chairman himself, Sir Phillip Green. Looking every part powerful, she paired a center-part and neutral makeup with a sleek black leather kimono and Paul Andrew Matrix sandals, representing the edgy, polished style that frequently sends her 7 million Instagram fans into a tizzy.

Speaking of style, I love that Ciara looks equally at home in an ensemble for under $100 from Topshop (see below for her best looks from the label) as she does decked out in Cavalli for an ad campaign or rocking American designer Walter Mendez to the White House Correspondents' dinner.

Here's a full-length look at her leather outfit from Thursday's awards:

Her boyfriend, Russell Wilson, hopped onto Twitter to share in the excitement, sending out lots of good vibes for Ciara's big collab.

Here are some other looks Ciara has worn from the British label:

Even before the fashion gods announced that androgyny was a la mode last month at fashion week, Ciara was rocking a men's T-shirt from the Top Man collection for this sleepy selfie.

She borrowed from the boys again for a Topshop celebration last winter — this time it's black leather overalls by Topman over a black cropped shirt from the women's line.

In 2013, she looked pretty in (plastic) pink in Paris after a shopping trip, wearing a pastel Topshop skirt to hit up Balmain.

Here she is on a date with Wilson, wearing an olive green army-inspired dress that's just $95.

And my favorite, this elevator selfie, served up in another high-low one-two punch: Topshop gear and Louboutins boots.

Moral of the story? Ciara + Topshop = unstoppable fierceness, and I can't wait to see the style (and selfies) her ambassadorship will bring.

More like this
Iris Law's Skunk Mullet Is Not For The Faint-Hearted
By Tomi Otekunrin
10 All-Denim Outfits Inspired By Billie Eilish, Bella Hadid, & More
By Allie Fasanella
Dua Lipa Just Took A “Pre-Show Dip” In A Dreamy Thong Bikini
By Allie Fasanella
Meghan Markle’s Favourite Skincare Brand Has Finally Landed In The UK
By Tomi Otekunrin
Get Even More From Bustle — Sign Up For The Newsletter