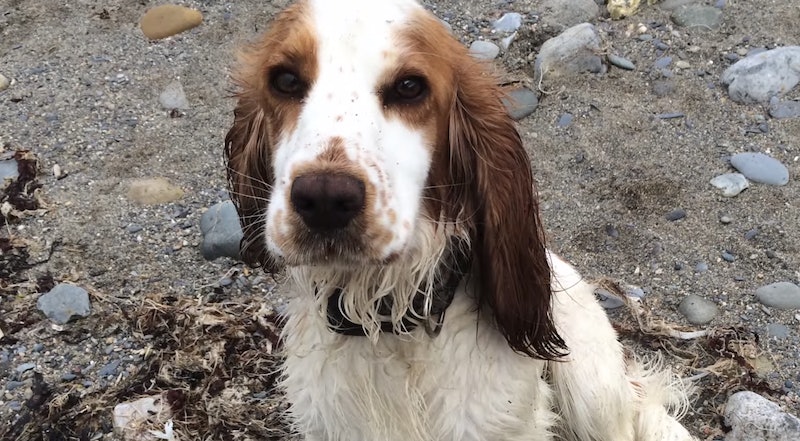 Since as far back as I can remember, I have had a fantasy/daydream about somehow rescuing a poor defenseless baby animal. In my mind it was always either a teeny tiny kitten or a three-legged dog (don't you judge my daydreams), but I'll take what I can get, including (especially) a baby dolphin. Well, Rich Wilcock, aided considerably by his Cocker Spaniel Leia, basically lived my dream when the pair rescued a beached baby dolphin while fishing on an isolated beach in the U.K. In a stunning display of self-control, they somehow resisted the urge to take it home with them and raise it as their own, which is probably what I would have tried to do. (Just kidding you guys: wild animals belong living free and in the wild.)

Leia was the first to notice the calf and run over, which makes this the coolest rescue by an awesome bitch named Leia since Princess Leia rescued Han Solo from carbonite in Jabba's Palace. Upon seeing the little dolphin struggling on the rocky coast, the mom in me basically stopped breathing and was like "LET ME PROTECT YOU!" Honestly, I probably just would have started crying, then I would have started thinking about its poor dolphin mama worrying about it, and then failed to be an effective rescuer. Wilcock, on the other hand, while clearly shocked, managed to rescue the wee one while filming. #talent

While "Buddy" (the name bestowed upon the dolphin calf later on) had kind of a tough time finding its way back to the open sea at first... which sort of makes you wonder "Is this a particularly hapless dolphin? Is that what got it beached in the first place... it pretty quickly manages the breakers and the waves and goes on its merry way.

Check out the daring, three-species rescue below!