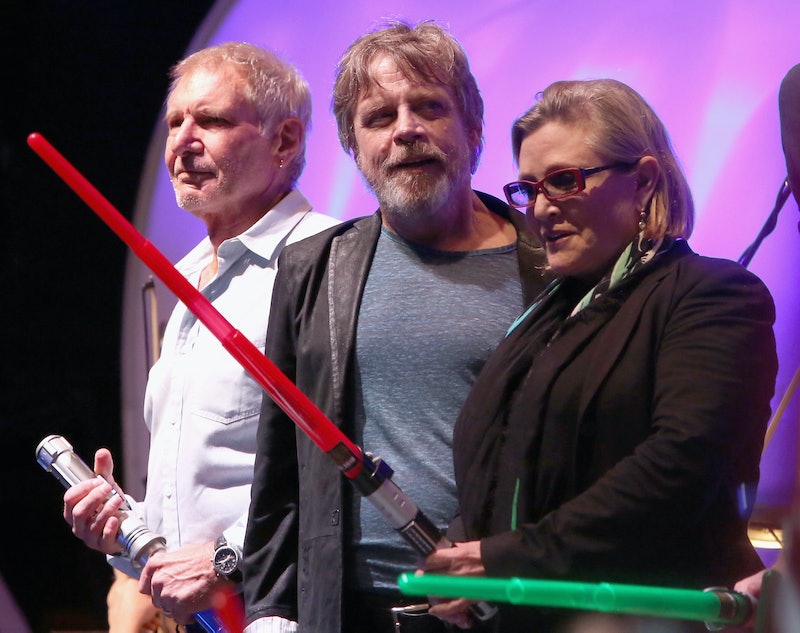 Without a doubt, the biggest event at this year's massive San Diego Comic-Con was Star Wars: The Force Awakens' panel. Everyone from J.J. Abrams to Carrie Fisher to newcomers like Daisy Ridley showed up, in addition to Han Solo himself, Harrison Ford, in his first public appearance since getting into a major plane crash earlier this year. If the star-studded list of attendees didn't tip you off, a lot was revealed during the panel, including a new video and a Star Wars concert that featured John Williams' iconic theme music performed by the San Diego Symphony.

While much of the panel discussion involved relaying hilarious stories from the set of The Force Awakens and thanking their fans for their devotion for the franchise, the cast and crew did reveal some information about the upcoming movie. Rather than a new trailer — which wasn't expected to be presented, so no let-down here — they brought in a making-of featurette that took fans behind-the-scenes of the upcoming and highly anticipated film. Additionally, cast and crew did reveal some important nuggets of information. Based off the helpful and hilarious live-blogging from the folks at io9, as well as reporting from The Verge, and The Los Angeles Times , here were the major reveals about what's to come in Star Wars: Episode VII – The Force Awakens.

The Film Is Now In The Editing Stages

"We're editing. We have a cut of the movie, we're doing fine tuning," said J.J. Abrams, according to io9.

There Will Be Lots Of Effects — Not In CGI

According to io9, tike the original films, this one will rely heavily on practical effects rather than CGI. As proof, the panelists brought out the robotic character Bobba Joe to show off.

According to The Verge, Gleeson's role is definitely one on the dark side — and, considering the actor's role was previously undefined, so this reveal was big. According to CinemaBlend, Hux is apparently a high-ranking officer in The First Order, which is basically the Empire 2.0.

The Name Of The First Order's Base Is Starkiller

Which, as The Verge reported, is in homage to Luke Skywalker's original name — "Luke Starkiller" — which was only used in early drafts of the first film's script.

The Script Is Amazing

According to io9, apparently impressed Harrison Ford, who doesn't strike me as easily impressed.

The Next Films Will Be A Continuation Of The Same Saga

According to io9, this promise was made by Lucasfilm president Kathleen Kennedy.

Though, according to the LA Times, Ford also described it as a natural progression.

Simon Pegg Will Play An Alien

And that bit of information was revealed in the aforementioned behind-the-scenes video, which you can check out below.

I don't know about you, but after this, I kind of already want to start lining up outside the movie theater for this film. Star Wars: Episode VII — The Force Awakens will hit theaters Dec. 18.