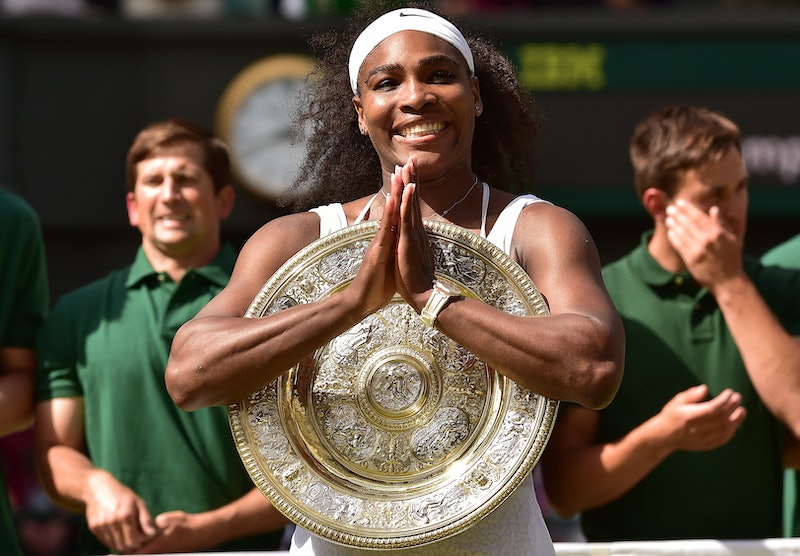 Whether or not you consider yourself a tennis fan, I think we can all agree that Serena Williams' latest victory at Wimbledon, where she won her sixth straight title on Saturday, is worth celebrating. The 33-year-old beat 21-year-old Spanish star Garbiñe Muguruza 6-4, 6-4 in an energetic and intense match, and even though her ranking as the world's No. 1 player had seen her named the predicted winner, it made her triumph no less amazing to witness when it happened. Winning Wimbledon marked Williams' 21st Grand Slam title, and she's showing no signs of slowing down anytime soon.

Even celebrities love big sporting events — everyone from Drake to Kate Middleton attended Wimbledon this year, and those who couldn't make it in person to the event held annually in London still expressed their excitement via social media instead. Williams' continued prowess in the sport is a wonderful credit to American athletes, and female athletes in particular, and I don't think anyone could know her story and watch her play and not get behind her 100 percent. The responses from Hollywood are still pouring in and likely will for days to come, but here are some of the congrats Williams received from her fellow celebrities.

Aw, nothing like a little love from your big sister.

It doesn't get bigger than the First Lady.

Because Wanda knows what's up.

What's better: Winning Wimbledon or having J.K. Rowling congratulate you?

Are La La and Serena friends? I love this idea so I'm going with "yes".

Why not? (There are so many jokes I could make here.)

Love to see fellow athletes supporting each other, especially when they've faced off before!

So random, but so awesome!