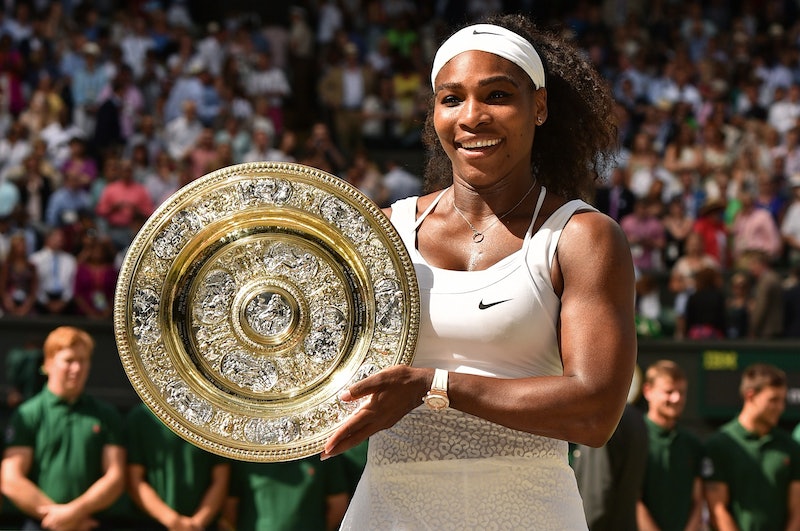 On Saturday, the greatest women's tennis player of all time — perhaps even the greatest tennis player ever, on the strength of her sparkling resume — added another piece of hardware to her trophy case. Serena Williams won Wimbledon for the sixth time in her career, defeating Garbiñe Muguruza in the tournament's final match. It's a towering achievement, and she's far from finished. So, what sort of recognition will she get back home? For example, will Serena Williams get a White House invite for winning Wimbledon?

It's an honor she's received before, having been invited to meet with President Obama after winning the vaunted tournament back in 2009. It was an experience that Williams related fondly at the time, as ESPN detailed — she specifically mentioned Obama asking whether she ought to be wearing high heels, given the crucial importance of her feet to her stellar play. She also lauded him as having an "unbelievable presence," while seeming to "be so normal."

There's a long tradition of superstar athletes, championship teams, and historically significant competitors getting invited to the White House, and President Obama has clearly kept that up — he typically meets the championship team in each major sport, and the World Cup-winning United States National Women's Team will be getting the honor sometime soon, as well.

In short, it would be a pretty perfect time to welcome Williams to the presidential pad. And not just because she's on the most remarkably dominant run of her career — she's 33 years old, remember, an age at which most tennis players are slowing down, or out of the game entirely — but because of what she means to so many people. It's been hard not to notice the scores of people on social media who've been pulling for her, saluting her greatness.

As a towering, all-time great, Williams deserves every ounce of the praise she's receiving from all quarters. But it's no surprise what a distinct inspiration Williams is to countless women and girls, black women especially. Considering the amount of racism Williams has endured in her career, her virtuoso achievements in what's traditionally been a hugely white sport, and the gross, racially charged ways people talk about her body, she's more than just an on-court hero — she's also a dynamic, downright joyful expression of black womanhood.

Considering the magnitude of all this, it would be the perfect opportunity for Obama to place a call. Back in 2009, Williams visited the White House on July 14, just over one week after securing the Wimbledon title — the third of her career, at that time. So now that she's doubled that number in just six years' time, doesn't it seem like a good chance to celebrate?

For the time being, it's unclear if Williams will get the invite — no announcements have been made, at the very least. But she did get a shout-out from Michelle Obama on Twitter following her win, so we can only hope that an invitation is pending. It'd be Obama's loss if not, frankly — after all, he only has one Wimbledon left in his presidency. Williams, on the other hand, might have many more.

More like this
Jake Daniels Just Became The UK’s First Active Football Player To Come Out As Gay Since 1990
By Sam Ramsden
What Is Jeanie Buss' Net Worth? The Lakers President Is Uber Rich
By Hugh McIntyre
Michelle Williams Reveals Sweet Way Jeremy Strong Helped After Heath Ledger Died
By Nola Ojomu
Sandra Bullock, Girlboss Extraordinaire
By Matt Harkins & Viviana Olen
Get Even More From Bustle — Sign Up For The Newsletter