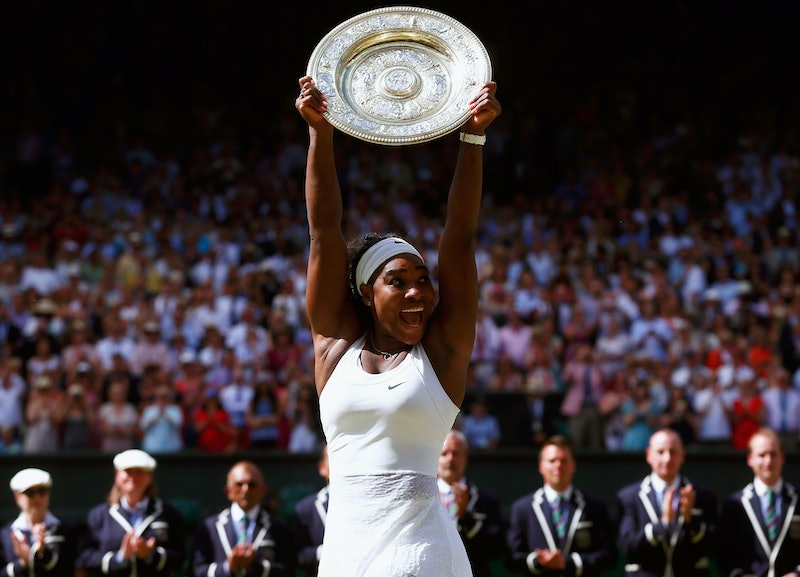 Serena Williams is a tennis legend, there's no doubt about that. Saturday morning, Williams took her sixth Wimbledon title when she defeated Garbine Muguruza in what she calls a "Serena Slam," aka winning four straight majors. She triumphantly held up her winning plaque in celebration, which prompted us to celebrate her and her killer style, on and off the court.

Aside from being exceptionally talented, Williams is exceptionally stylish. She uses each opportunity on the court to show her competition that she is a boss, whether that's in a pink Versace tennis dress or a simple white skirt from Nike. Once she sets down her tennis racket, her style gets even better, often opting for bright, colorful dresses in flattering cuts to show off her athletic figure.

What I love most about Williams' style is that she is unapologetically feminine, especially when most people assume that female athletes only wear gym clothes. She is not one to shy away from pretty details and designer labels, but she still looks killer in workout gear, which is probably why Nike and Puma worked with her to design collections. Clearly, Williams has some serious fashion skills. Here are some of her best looks, on and off the court.

This ZAC Zac Posen dress Williams wore to the 2014 CFDA Fashion Fund Awards dinner not only flatters her killer bod, but the color choice is spectacular. She is literally glowing.

2. This crop top/skirt combo after the Australian Open

Williams celebrates her Australian Open win with a leather crop top, a very on-trend piped skirt and an enviable pair of cage heels.

3. The white suit she wore to celebrate yet another win at the BNP Paribas WTA Finals

Williams definitely didn't play it safe in this body conscious white suit, revealing a black lace bra underneath, because she's not afraid to take risks.

4. The Ines Di Santo dress she wore to the Vanity Fair Oscar party in February

5. This neon yellow Nike tennis dress she wore during the Australian Open Finals

Williams couldn't contain her excitement during the Australian Open Finals and I bet it's because she looked amazing in this bright yellow dress. Or maybe because she won. But I'm going with the former.

6. Killing it in yellow again at the 2012 Vanity Fair Oscars party

Williams showed off her amazing body and excellent taste in this golden mermaid cut dress at the 2012 Vanity Fair Oscars party, and it definitely paid off.

7. This leopard print tennis dress she wore during the US Open

The fact that tennis players get to wear cute dresses like this while playing sports really makes me regret not playing tennis in high school.