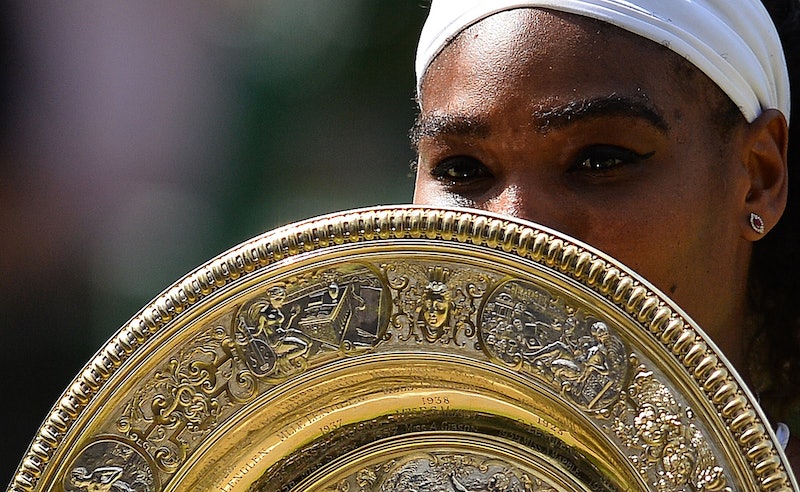 Serena Williams is your 2015 Wimbledon champion, and that's a sentence that should surprise precisely no one. At 33, an age when most tennis players are on a severe decline, Williams remains one of the most dominant individual athletes in the world. She's been knocking out Wimbledon titles since 2002 (this latest one is the sixth of her career). But there's another notable aspect of her victory Saturday that you may have heard people talking about — hell, she even mentioned it herself. So, what does "Serena Slam" actually mean? (Update: On Sept. 11, Williams lost in the U.S. Open semifinals to Roberta Vinci.)

It's a phrase that's been mentioned often in the aftermath of Williams' dramatic Wimbledon win, but it's sometimes presented as though the meaning is self-explanatory. "Oh, sure," you might say, "she's got a Serena Slam now," wary of confessing that you have no idea what that actually means. It's obvious that it somehow relates to Williams herself — you know you're going good when you're setting records that are named after you — but there's no shame in admitting that your tennis lingo isn't up to snuff.

Well, never fear, because the answer is actually quite simple. In professional tennis, there are four big tournaments that play out in the same order each year — the Australian Open, the French Open, Wimbledon, and the U.S. Open. These are popularly known as Grand Slam tournaments (also known as Majors), and they're the most prestigious events in pro tennis. Williams would know — she's now won 21 of them.

Simply put, a Serena Slam is when you win four of those Grand Slams in a row, a feat Williams achieved with her Wimbledon victory on Saturday — she won the 2014 U.S. Open, and has now swept through the first three Grand Slams of 2015. It's an enormous achievement, and it could only be topped by a win in the 2015 U.S. Open, which is scheduled to start on August 31.

This actually isn't new territory for Williams, which makes sense, considering the achievement is named for her. This is the second Serena Slam of her career — she also rattled off four straight Grand Slam titles between 2002 and 2003, but she never managed to net all of them in the same calendar year. That would be a feat that has only been accomplished by three women in the history of tennis — American Maureen Connolly Brinker in 1953, Australian Margaret Court in 1970, and German Steffi Graf in 1988.

Suffice to say, it's going to be a must-watch event when she hits the court in New York City next month. And while anything can happen — injuries, upsets, unexpected bounces, and so forth — she's got a hell of a good shot.

More like this
David Beckham’s Controversial Qatar Deal Skyrocketed His Net Worth
By Catharina Cheung
'Breaking Bad' Duo Walt & Jesse Are Back — In This Super Bowl Commercial
By Jake Viswanath
Watch Jacinda Arden’s Devastatingly Honest Resignation Speech
By Sam Ramsden
Twitter Is Identifying With Sally Field & Jane Fonda’s Friendship In New Viral Video
By Jake Viswanath
Get Even More From Bustle — Sign Up For The Newsletter
From hair trends to relationship advice, our daily newsletter has everything you need to sound like a person who’s on TikTok, even if you aren’t.