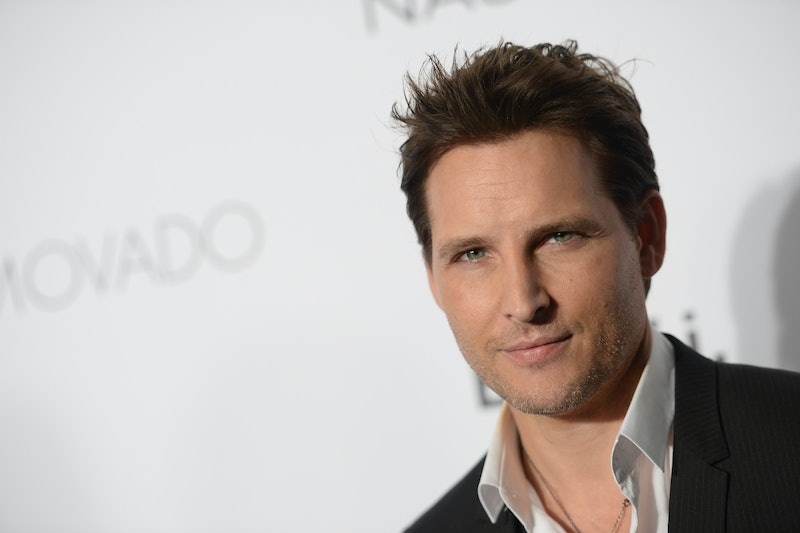 DC Comics has had quite the week at San Diego Comic-Con, unveiling not only trailers for The Suicide Squad and Batman vs. Superman, but also rolling out some great news on the DC television side, as well. Currently, the company has four television shows on its roster: the ever popular Arrow, The Flash, the upcoming Legends of Tomorrow on The CW, and CBS' Supergirl, premiering this fall starring Glee's Melissa Benoist. Despite having a slightly corny first trailer, Supergirl will hopefully be a great (and feminist!) continuation of the DC TV franchise, and during Comic-Con, the show revealed that the Twilight franchise's Peter Facinelli is joining Supergirl as Maxwell Lord in a recurring role. For those familiar with DC, Maxwell Lord is the guy most closely associated with the formation of the Justice League, but his role in Supergirl is much more of a mystery — a very exciting one.

Maxwell's official character description is quite open to interpretation. According to Warner Bros., "Maxwell is a green tech billionaire who enjoys a friendly rivalry with Cat Grant and a fascination with National City’s newest arrival — Supergirl." So what will his arc entail on the show? Will his involvement in the show mean more DC characters from Maxwell's story lines? Will he have any of the story lines from the comics? If so, these are just a few of the many people who could stop by National City while Maxwell is around (and even after, if he doesn't stick around for long):

To be honest, Power Girl should appear on the show at some point no matter her connection to Maxwell Lord, because she has a stronger bond with Kara, aka Supergirl. Power Girl is basically Supergirl from another dimension, although she is more mature and fights in a much more aggressive and strategic way. Both are Kal-El's cousins, just stuck on different earths in different realms, but in the comics they have had run-ins when Power Girl gets stranded on main Earth. She could, however, show up thanks to Maxwell Lord as she assists her fellow superheroes in trying to track down Lord after he kills Ted Kord, aka the Blue Beetle.

He formed them, so would it really be too much to ask to see even just a few of the members? They don't all have to assemble. I'm not asking too much here; even Smallville had a few Justice League moments!

Superman and Wonder Woman have complicated histories with Maxwell Lord. Maxwell at one point in time is able to control both heroes, but more importantly, Wonder Woman is the one responsible for actually killing Lord. After doing so, it damages her reputation with the world and with Superman and Batman until the heroes later reconcile.

Maxwells kill Ted Kord, one of the Blue Beetles, but the story line becomes quite complicated. Booster Gold and the Blue Beetles from past, present, and future all work together to go back in time and save Ted Kord. However, when they return to the present, they realize that this means Maxwell Lord was never later killed, so he was able to use mind control on Superman and basically turn Earth into a police state. Later, Ted Kord realizes his death has to occur and goes back to the past to accept his fate.

Whether all these characters or none of them come to Supergirl, it's going to be very exciting when Maxwell Lord joins the show this fall.