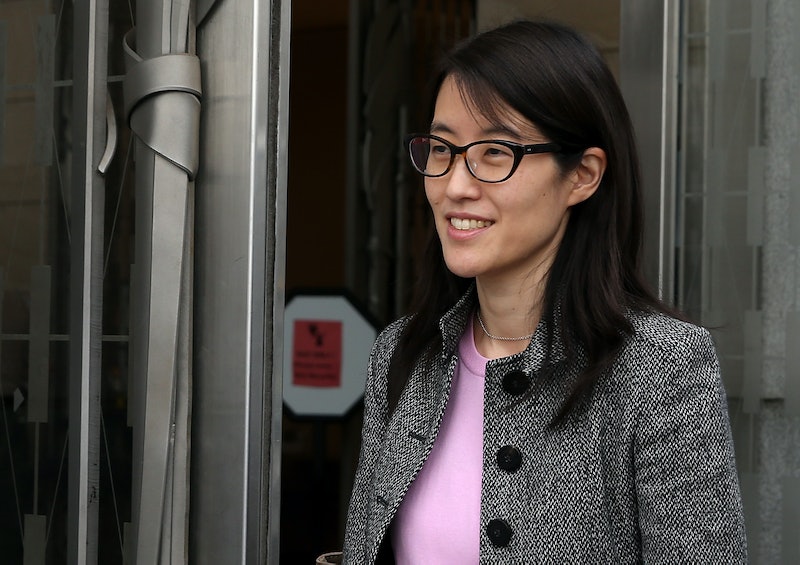 Sometimes it feels like there's no way for women to win in the workplace, and according to a recent study, that might actually be true. Using three controlled experiments, researchers have found that men are implicitly threatened by female bosses, even though they may not realize it. In case this wasn't depressing enough already, the results indicate that bias can be found across all kinds of workplace situations: salary negotiations, bonuses, and even just regular interactions with employees. Let's hear it for sexism, everybody!

In the first experiment, participants were asked to simulate salary negotiations with female or male "managers." It probably won't come as a surprise that the gender of both the boss and the participant made a difference in the interactions, but the extent of its influence is certainly disheartening. According to Mashable, women responded to the initial offer of $28,500 with an average counter-offer of $41, 636 for both male and female bosses. Men, on the other hand, asked for an average of $42,870 from managers who were men.

Considering that research has consistently found that women under-negotiate their salaries, you're probably thinking that a $1,200 difference isn't too bad. May I remind you, however, that sexism is the hardest worker of all? When men were negotiating with female managers, they countered with an average offer of $49,400, which is more than $6,000 higher than what was asked of male managers.

Male participants were then asked to perform a word association test, which is a common method of determining implicit biases in psychological research. Volunteers were asked to list the that first come to mind when presented with words like "threat" and "risk" directly following the salary negotiation, and the results indicated that there was a link between negative word associations and men who had been assigned female bosses. In other words, the data suggests that men are threatened by women in positions of authority. (Duh.)

A separate experiment asked men to divide a $10,000 bonus among their coworkers and bosses, and the results were just as depressing. Although they tended to hand out almost equal amounts to male and female colleagues, it was an entirely different story with the higher-ups. Participants gave male leaders more money, but they gave less to female bosses — in fact, they gave themselves $500 more.

The last experiment looked at the association between leadership styles and gender. In keeping with the other findings, men were threatened by female superiors who displayed typically "male" characteristics, like ambition and self-promotion. Men were more comfortable around women who showed "administrative" agency instead, and they were less likely to display assertive behaviors as a result.

This doesn't mean all men are sexist pigs, or that women are doomed to fruitlessly beat against glass ceilings forever. "There are plenty of men out there who could very much believe in the cause of gender equality, but ... still feel threatened," co-author Leah Sheppard told Mashable. Unconscious biases are an inevitable part of being human; nobody should beat themselves up for societal indoctrination. The key is to recognize how those biases affect your behavior.

"I think you just sort of have to sit back and listen," Sheppard said.