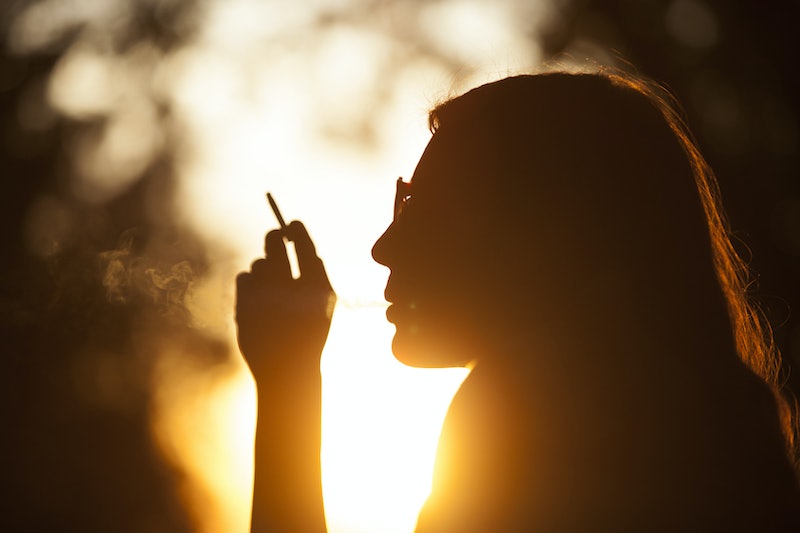 It's no surprise that people with mental health disorders often turn to substances like tobacco, alcohol, and marijuana to ease their pain. With mental health problems still carrying such a stigma and because good mental healthcare remains in short supply, this makes plenty of sense. But could the causation run in the other direction? Disturbingly, a new meta-analysis suggests that smoking cigarettes might contribute to developing schizophrenia in the first place — as if you needed another reason to quit, yikes.

Researchers from King's College London aggregated data on over 15,000 tobacco users (as compared to 273,000 non-tobacco users), included in 61 previous academic studies of tobacco and mental health. If the smokers in this group were already smoking before experiencing a psychotic episode, then it wouldn't make sense to explain their smoking as just a way to self-medicate pre-existing schizophrenia. If the smoking comes first, perhaps it caused the schizophrenia (at least in part).

And that's just what the researchers found: "57% of people presenting with a first episode of psychosis were smokers — this means they were three times more likely to be smokers than healthy, nonsmoking study participants. Daily smokers were also found to develop psychotic illness around 1 year earlier on average than nonsmokers." In other words, within this quite large data set, smokers seemed to develop schizophrenia more often and quicker than non-smokers. They may have continued smoking in self-medication, but it's not why they started.

So, will your pack-a-day habit literally turn you schizophrenic? Maybe, maybe not. Although it remains unproven, the King's College researchers hypothesized that dopamine provides the link between smoking and schizophrenia. Smoking releases dopamine, but also increases your desire for dopamine fulfillment over time (that's why smoking turns from enjoyable to necessary in nicotine-dependent people in the long run, and why quitting is so hard). An overactive dopamine system has been blamed for schizophrenia, and dopamine-blocking drugs positively impact the symptoms of schizophrenia. So maybe smoking speeds up your dopamine production and makes it more likely to spin out of control, which manifests as schizophrenia.

Still, the incidence of schizophrenia is still quite low, even in populations with a relatively large contingent of smokers. You should still quit smoking, but maybe to avoid the much more likely ill effects: lung disease and cancer, poor cardiovascular health, bad skin, quicker aging, blown budget, smelly home, etc.