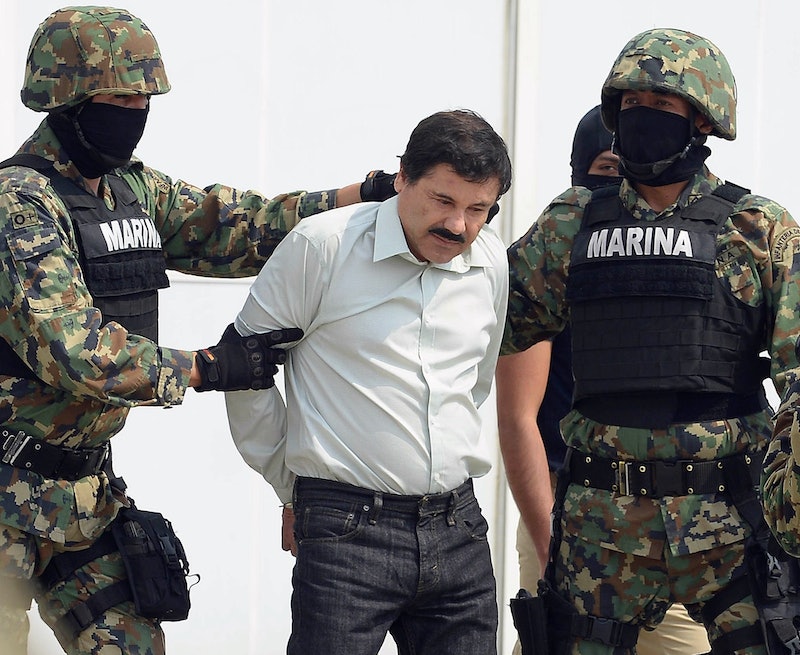 After spending a little over a year in one of Mexico's most secure prisons, Joaquin "El Chapo" Guzman has escaped. This is Guzman's second prison break and by far his most elaborate. The Sinaloa drug cartel leader and co-founder climbed down from a small opening near his prison shower where he was last seen and walked a mile through an expansive, fully lit underground tunnel before reaching a rural farm just outside the Altiplano maximum security prison in Almoloya on Saturday. Retired DEA chief of international operations Michael S. Vigil estimates that Guzman will be back to completely leading the Sinaloa cartel from in just two days' time. So, who is "El Chapo" Guzman, one of the most powerful drug lords in the world?

The man who was ranked on Forbes' most powerful list in 2009 and was named "Public Enemy Number One" by the city of Chicago in 2014 came from rather humble beginnings, growing up in the small village of La Tuna de Badiraguato in the Sinaloa province of Mexico. Though reports vary, Guzman was born in either 1954 or 1957, putting him in his late 50s. He had little schooling and an allegedly abusive father who reportedly sold and smuggled drugs to make ends meet, according to Vigil, who also suggests that Guzman's father allegedly got him into the drug trade. By the age of 15, he was apparently growing his own marijuana. His initial involvement with drug cartels came in his early 20s, when former drug trafficker Hector Luis Palma Salazar tapped Guzman to transport drugs to nearby coastal cities across Guadalajara as they made their way towards the United States, according to journalist Malcolm Beith's biography of Guzman entitled The Last Narco.

Guzman allegedly transitioned to aiding in the smuggling of illicit substances such as marijuana and cocaine, which went from Colombia all the way to the United States, just as a violent drug war was beginning to unfold in 1981. Along with Salazar, Guzman established the Sinaloa cartel and further expanded his empire to eventually include such far-reaching locations as Europe and Australia. He is credited with establishing an intricate system of tunnels spanning hundreds of feet with rail cars and lighting across the border from Mexico to the U.S., according to the DEA. The agency also reported that his smuggling techniques included everything from catapulting drugs over the U.S. border to establishing fake air taxi businesses.

Guzman was arrested in 1993 following an international manhunt that saw the powerful drug lord captured in Guatemala. He was tried for the involvement and murder of Cardinal Juan Jesus Posadas Ocampo and ultimately acquitted, but was found guilty of firearms possession and drug trafficking charges, which resulted in a 20-year prison sentence. Guzman ended up in a minimum-security facility in Guadalajara and escaped just seven years after entering prison. Legend has it that Guzman escaped by hiding in a laundry cart, though authorities allege that he simply walked out the front door instead.

He spent the next 13 years running the Sinaloa cartel as a free man before being captured by authorities at his home in Mazatlan. Guzman was then brought to Almoloya, said to be one of the most secure prisons in Mexico. U.S. authorities wanted Guzman extradited to stand trial, but Mexican officials declined to do so. Security expert Raul Benitez told the Associated Press that the decision came because Guzman is first and foremost a Mexican citizen and should thus do his time in his home country first before facing further legal battles up north: "First he had to pay his debt in Mexico and then in the U.S. Now it's very evident that it was a mistake."

Guzman is currently being sought by Mexican authorities, who have grounded all flights from the Toluca airport near the prison and are conducting searches on roads near the facility. Likewise, guards and prison staff are currently being questioned. The U.S. and Guatemala have also indicated they're prepared to help assist the Mexican government in the capturing of Guzman.